Key Takeaway
The COVID-19 pandemic exacerbated the nation’s mental health crisis. Nearly one-third of adults now report having symptoms of anxiety and/or depression, up from 11% in 2019. #OWHealth
Share

Once viewed as taboo or a source of shame, mental health is getting much-needed attention. President Joe Biden made it a centerpiece of his healthcare agenda in this year’s State of the Union address, declaring that all Americans should get the “mental health services they need.”

To achieve that goal, the administration unveiled a plan to bolster the nation’s mental health infrastructure, including increased funding to expand the mental health workforce, supporting the soon-to-be launched national 988 crisis hotline, and calling on insurers to improve mental health coverage, creating parity with insurance for physical health.

Even before the SOTU, mental health had entered a new phase of public discourse. Surgeon General Vivek Murthy, MD, in December issued an alert warning of the “alarming number of young people struggling with feelings of helplessness.” And such prominent public figures as Olympic gold medalists Simone Biles, Michael Phelps, and actor/singer Selena Gomez have all opened up about their personal struggles.

While the trend to destigmatize mental health is a positive, the increased demand is putting pressure on a healthcare system that is ill-prepared to deal with an influx of patients. The industry must overcome several systemic problems to create a more integrated and holistic approach to care delivery.

Mental health was an issue well before the pandemic, with disorders like major depression (also called clinical depression), manic depression (also called bipolar disorder), schizophrenia, and obsessive-compulsive disorder accounting for several of the top causes of disability in established market economies. The COVID-19 pandemic exacerbated the problem. For instance, 31% of adults now report having symptoms of anxiety and/or depression, up from 11% in 2019. There’s also been a near doubling of adults saying they’ve seriously considered suicide.

Further complicating the problem is the fact that patients with behavioral health needs can enter the system at one of several touchpoints. Depending on their response to treatment, they can, and usually do, continually move up and down the ladder. And care is becoming more fragmented as a host of startups have stepped in to capture patients, especially at the frontend of this spectrum. Many of these new entrants are backed by venture capital, which pumped close to $6.9 billion into behavioral health companies last year, up from $2.2 billion in 2018. 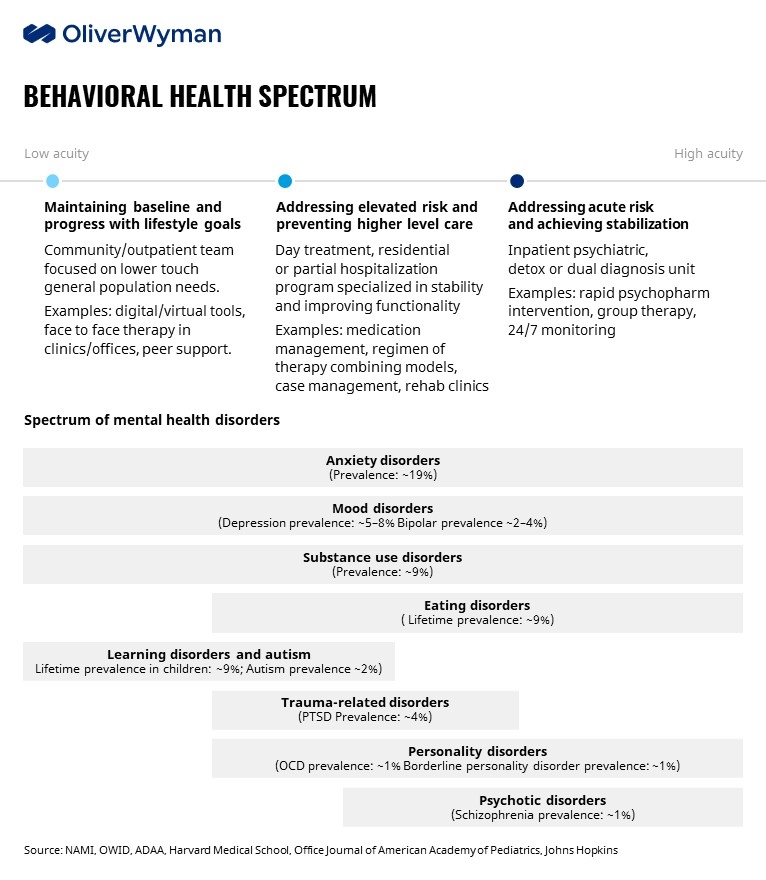 On top of those challenges, three structural problems stand out as roadblocks for the industry to carve out a path forward:

Supply-demand: Respondents to the 2021 Oliver Wyman Consumer Health Survey listed lack of appointment slots (41%) as one of the biggest barriers to seeing a behavioral health specialist. Roughly 37% of Americans in 2021 lived in an area suffering from a shortage of mental health professionals. The country needs more than 6,300 providers to fill those gaps. The supply side of the equation could get even worse. In 2019, 61% of psychiatrists were 55 years of age or older, according to the Association of American Medical Colleges. It takes about 10 years to train and license a psychiatrist.

Diagnosis and treatment: Accurately diagnosing a patient, particularly in the case of non-acute mental illnesses, and ensuring they receive the correct treatment by the appropriate professional is complex. Finding the right match is not always straightforward. Studies have shown rates of misdiagnosis as high as 65% for major depressive disorder in primary care settings. Borderline personality disorder is so misdiagnosed that there’s no accurate way to capture how many people actually have the condition, according to the National Alliance on Mental Illness. And there’s a new body of evidence suggesting that nearly one-in-five Americans have undiagnosed depression.

Cash pay vs. benefits: Finally, there’s the issue of benefits: Does the mental health professional accept your insurance? Only 62% of psychiatrists in 2019 were taking on new patients with commercial insurance, according to the Medicaid and CHIP Payment and Access Commission; it was the same rate for Medicare patients, and just 35% of psychiatrists were willing to see Medicaid patients. And in our consumer survey, 39% of respondents said the inability to find an in-network provider was a barrier to getting care. Even if a psychiatrist does accept insurance, what sort of co-pay is involved? Moreover, the reality is that pricing for behavioral health services vary widely. Many of the new entrants, especially those utilizing virtual care, are offering a subscription service, which is often an out-of-pocket expense. All of this serves to exacerbate the health inequity that is endemic within the healthcare ecosystem, limiting access to behavioral health services to the affluent who can afford the cash pay option or suffer the higher out of pocket costs that remain even when they can find services covered by insurance.

Calls to Action for Healthcare Leaders

We see three important steps for stakeholders to take in addressing the growing demand for mental health services:

Continue to destigmatize behavioral healthcare: As noted above, there’s been progress in making mental health more of a mainstream conversation, but more needs to be done to ensure that we are giving mental illness the same level of attention and care as physical ailments. Healthcare leaders can start with their own workforce. Frontline workers want their employers to pay more attention to mental health and wellbeing. In fact, nurses and other allied professionals in our recent nursing survey listed mental health as their biggest worry for working in healthcare. We may also be a turning point when it comes to benefit design — the vast majority of large employers responding to Mercer’s 2021 National Survey of Employer-Sponsored Health Plans identified expanded access to behavioral health as their most important strategy for the next several years. By comparison, it ranked #4 in 2019.

Improve access and fix the supply/demand model: Recognizing the paradox that the removal of the stigma of mental illness presents, insurers are beginning to explore new models for providing access to those with a mental health condition. In addition to expanding access, we need to explore new benefit structures and models that address the affordability challenge of receiving care for many of these patients. For example, Blue Cross Blue Shield Massachusetts has announced a new behavioral health benefit aimed at children. Other insurers are exploring new supply and care models. The popularity of digital tools also presents an opportunity for providers to ease the supply-and-demand equation and explore additional lower-cost touchpoints. We saw an uptick in utilization of telehealth and other virtual tools in our consumer health survey. That was especially true among people 18-29 years of age — 20% said they downloaded an app or program that could provide mental health support and 14% had a virtual visit with a mental health professional. In addition to digital therapies, we need to find ways to optimize the limited supply of behavioral health specialists that are in the ecosystem today. Our navigation and referral programs need to ensure that psychiatrists and psychologists are available to those with higher acuity needs, while deploying other mental health professions and approaches such as peer support programs and specialists, pastoral counselors, art and music therapists, and nurse psychotherapists for lower acuity cohorts where appropriate.

Identify and adapt a new more integrated care model: An integrated approach to providing care to those undergoing behavioral and mental health issues represents the Holy Grail. How do we bring behavioral healthcare closer to the platform benefits, versus having to go to another provider for behavioral health services? And how do we make the process more seamless for those looking to access care? There are examples across the nation of health systems embedding mental health professionals in primary care settings, for instance, but we in the nascent days of those models. Where it is happening, though, there are signs of success, including for children and across diverse populations.

We know that there is a huge amount of value to unlock within the behavioral health space, for all healthcare stakeholders. Consumers deserve better and more affordable access to these critical services, payers and self-insured employers will benefit from lower total cost of care for patients with behavioral health needs who typically cost 200% to 300% more than cohorts who do not have a behavioral health and medical comorbidity, and clinicians will have the tools and models they need to provide comprehensive services to their patients. As leaders in the industry, we must continue the relentless pursuit of finding a better way in behavioral health. We delve into these and other major challenges facing the industry in Affordability and Quality Impact platform, which is launching early next month. The site will showcase expertise and solutions Oliver Wyman has developed across lines of business that can help organizations identify cost drivers, find efficiencies, improve quality of care, and more.

Subscribe
Hospitals Want Price Hikes. How Should Insurers...
The 5 ‘Rs’ of Precision Oncology
Outlook on Climate Change as a Healthcare Crisis