Lowering Healthcare Costs and the Number of Uninsured

Key Takeaway
The number of people covered under the individual #ACA market would increase by 7.4M if #ARPA subsidies were permanent. #OWHealth
Share

Editor's Note: The below is an excerpt from an Oliver Wyman analysis developed for the Administration of President Biden uncovering the impact on premiums and uninsured through extending the American Rescue Plan Act (ARPA) policy. Read the full analysis here.

In 2021 and 2022, the ARPA has made health insurance coverage in the Affordable Care Act’s (ACA) individual marketplaces considerably more affordable for millions of Americans. Oliver Wyman’s actuarial health team calculated the estimated impact on health coverage if the ARPA changes to the advance premium tax credits (APTCs) are made permanent.

Oliver Wyman's Health Reform Microsimulation Model (HRM Model) determined the impact of the ARPA subsidies being made permanent, with a focus on the changes ARPA made to the APTCs and Medicaid expansion. In the figure below, we show our HRM model approximates how the markets would change if the ARPA APTCs were made permanent and the full effects of the ARPA APTCs were incorporated into the market in 2021. In reality, we expect that it would take several years for the full effects of ARPA being made permanent to be reflected in the health insurance markets. We estimate that the number of people covered under the individual ACA market would increase by 7.4 million, primarily among those eligible for APTCs (subsidized enrollees) due to the end of the subsidy cliff and more generous APTCs below 400% of FPL. We determine that the number of uninsured would decline by 5.6 million. This estimate assumes that 1.5 million previously uninsured would be covered through Medicaid expansion and 4.1 million would be covered due to ARPA APTCs being more generous and made permanent in the individual ACA market. We assumed that Medicaid expansion would occur in the non-expansion states with 50% probability such that in our model, half of the individuals living in non-expansion states with income below 138% of FPL would become newly eligible for Medicaid. We also determine that the average premium, before APTCs, in the individual ACA market would decline by 10%, from $556 per insured per month to $501, due primarily to a younger, healthier risk pool, assuming that the impact of the expansion in coverage was fully realized in 2021. 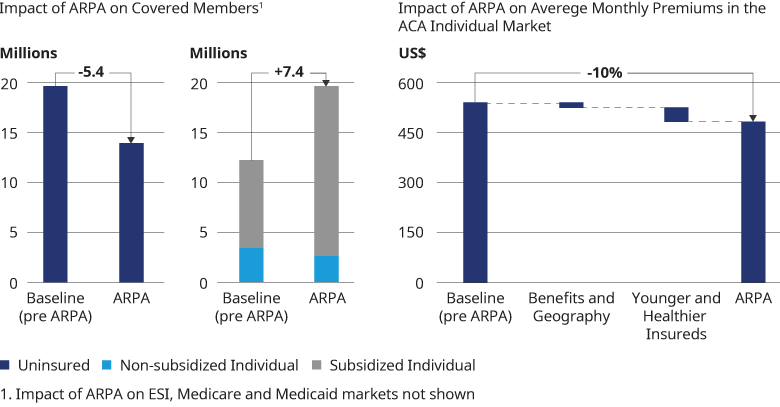