The Post-Pandemic Payer Mix: What Happened and What’s Next?

Key Takeaway
The “white-collar wave” or the expectation that 2020 white-collar unemployment would increase as the pandemic continued never materialized. #OWHealth
Share

Editor’s Note: In this two-part series, we first examine how the pandemic has impacted the payer mix. In part two, coming later this year, we will speculate on the mix shift of the future as a result of legislation, technological innovation, and economic and demographic outlook.

As we emerge from the pandemic in the US, we have endured much as a society. Through multiple surges, variants, deepened health equity disparities, vaccine science (and vaccine myth), there is finally light at the end of the tunnel. But 15 months ago, as the country went into lockdown and significant portions of the economy ceased to function, job losses and unemployment reached heights not seen since the Great Depression. Anxiety and other behavioral health issues skyrocketed. We were entering the Great Unknown, and one of the unknowns was how the pandemic would impact the health insurance enrollment mix.

Although many predicted significant disruptions, the healthcare insurance market shows strong resiliency (see Figure 1). While there was movement over the last year, it was more modest, and the health insurance system, on the whole, was able to accommodate the economic impact of job losses, and so on. Large group fully insured business declined by 1.6 million lives from 2019 to 2020 – a decline of 3.7 percent, while small group fully insured declined by nearly five percent, continuing a downward trend from 2018 and prior years.

Initial reports for Medicaid Managed Care Organizations (MCO) growth were tepid but gathered steam and saw an increase of 4.4 million lives, or 12 percent from 2019 to 2020 (though some of this growth could be due to the maintenance of eligibility provisions requiring states to keep beneficiaries enrolled until the end of June when the COVID-19 public health emergency ends).

The individual Affordable Care Act (ACA) market also saw an uptick in 2020 after a slight decline in 2019. We do not have data yet for the self-insured market but assume even less decline than we show in Figure 1 for fully-insured large group business due to the lower overall negative economic impact of the pandemic on the largest employers who make up the majority of the self-insured market.

According to the Bureau of Labor Statistics, the overall employment losses did start to shift more heavily to larger and larger employers each month from March through July 2020, but the largest employers recovered employment faster than smaller employers from July to September. 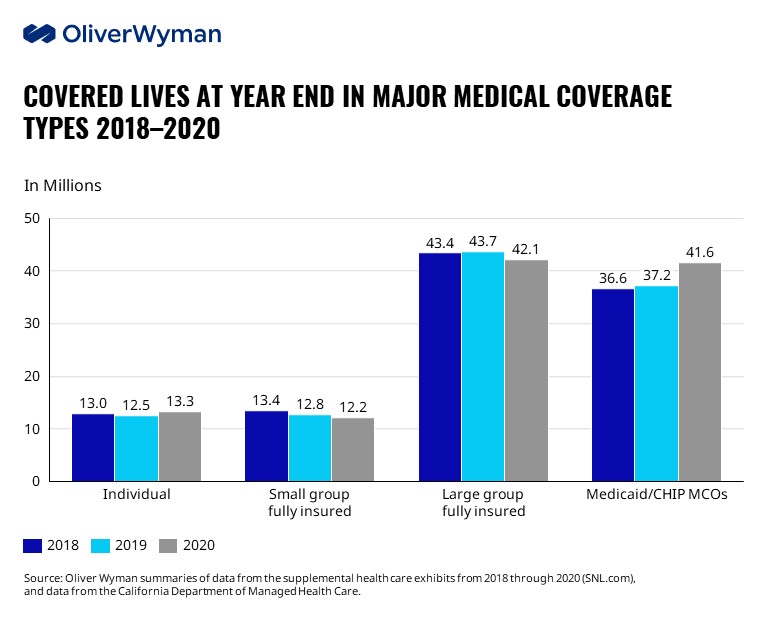 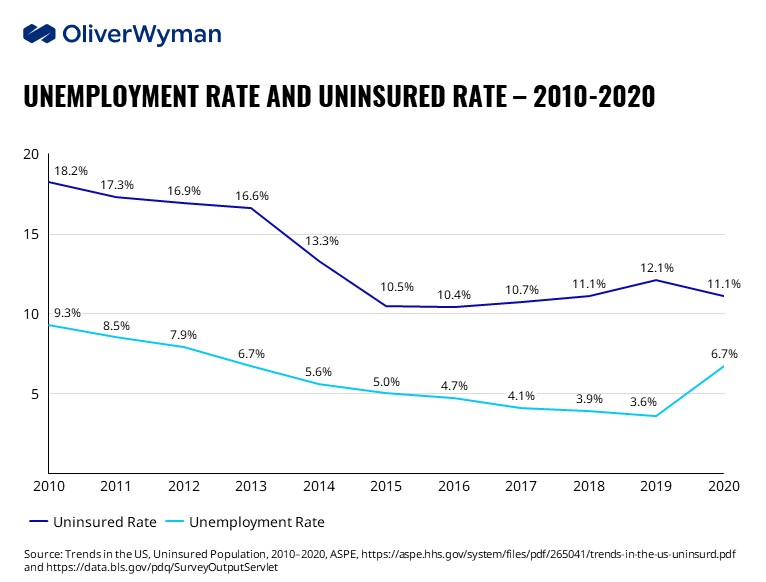 As unemployment rates came down from the financial crisis, so too did uninsured rates, with a sharp decrease in beginning in 2014 with the implementation of penalties on employers not providing adequate coverage, Medicaid expansion in many states, and the establishment of exchanges in all states. However, as unemployment levels continued their downward trajectory, the uninsured rate began to plateau in 2016 and then started to rise (likely as a result of increasing non-subsidized premiums on the exchanges, increasing healthcare costs in general, and the Trump administration’s attempts to curtail the ACA). But from 2019 to the first half of 2020, the uninsured rate actually fell as unemployment increased dramatically as a result of the pandemic.

So not only did the healthcare insurance market not break, it doesn’t appear it was stressed. Why? Here are five reasons.

1. Job losses during the pandemic came disproportionately from industries and employers that were less likely to have provided access to employer-based health coverage to their employees, for example, small employers in retail and entertainment.

2. Some of the unemployed during the pandemic were furloughed and maintained employer coverage, perhaps with the help of Paycheck Protection Program (PPP) loans made to their employers.

3. Many of the newly out-of-work were Medicaid eligible. Initially, we did not see a large increase in take-up rates in Medicaid. This is likely due to the lack of support and education regarding enrollment in Medicaid in the initial months of job loss, Medicaid’s retroactive eligibility, and the enhanced unemployment benefits made available under President Trump’s executive order. That “lag” has caught up, as the data in Figure 1 show. Additional factors in the increase in Medicaid enrollment include the prohibition on eligibility redetermination and additional states choosing to expand their Medicaid programs under the ACA since 2014.

4. Individuals who were on the fence about getting individual insurance became more risk-averse in the pandemic and took advantage of special enrollment periods to sign up for the ACA marketplace.

5. The “white-collar wave” or the expectation that 2020 white-collar unemployment would increase as the pandemic continued never materialized. While some white-collar workers lost their jobs in certain sectors, it wasn’t close to the catastrophic losses seen in other parts of the economy. The stock market remained strong throughout, and now many companies are waging a war for talent to keep up with demand.

Now that we are emerging from the fog of the last 14 months, there is optimism. In the US, COVID-19 cases are down significantly, and recent job data are encouraging. More jobs mean potentially more employer-sponsored coverage. There are also big regulatory and legislative changes afoot that could impact the payer mix shift going forward as well, both in the short- and long-term, including the resumption of Medicaid redetermination, enhanced incentives for states to expand their Medicaid programs under the American Rescue Plan Act of 2021 (ARPA), Cobra subsidies under ARPA, the potential for the expansion of the Medicare program to younger ages and the potential for a public option. Other potential impacts to the payer mix shift mix include a greatly enhanced ACA marketplace premium tax credits under ARPA for 2021 and 2022 and the potential for them to be made permanent and the path of economic recovery. (Regarding the latter, to quote James Carville, “It’s the economy, stupid”.)

In addition, there are societal shifts to consider. What will the future of work look like and how will that impact insurance coverage? What role will technology play in a post-pandemic world to influence coverage? Will these factors, and others, spur greater growth on the ACA exchanges? Further deteriorate employer-sponsored coverage, especially in the small group arena? Flood Medicaid past its breaking point? Or will the health insurance market largely remain stable as it has done since the 1960s?

We look forward to exploring these questions in part two of this series.

Subscribe
Outlook on Climate Change as a Healthcare Crisis
The Potential New Normal in Insurance Products
The Hospital of the Future, Part 3: Envisioning...