Key Takeaway
With our vaccine supplies growing and administration efficiency improving, the key question returns to one of willingness. #OWHealth
Share

Editor's Note: 15 March 2021: This perspective was originally published in November of 2020. As the nature of the COVID-19 pandemic changes (case counts, new strains, and vaccine availability and efficacy) we will continue to update our analysis and projections.

When we wrote Navigating the Long Haul to Normalcy in November, we committed that as the landscape changed and new data emerged, we would continue to update our perspective on likely timing to normalcy and the key contributing factors. In our December update, we discussed the impacts of the 1) fall surge, 2) approval of Pfizer and Moderna, and 3) unexpectedly high vaccine efficacy. In our January update, we discussed the impacts of 1) continuing surge of cases, 2) emergence of new SARS-CoV-2 variants, and 3) the beginning stages of vaccination. These analyses suggested we were likely to achieve potential Herd Immunity Threshold (pHIT) in the US on average in the late summer.

In the month since that update, the landscape has continued to evolve:

The Surge has Subsided

New daily case rates have been on a steep decline since mid-January and are now at approximately a fifth of their January peak (nearly 55,000 a day). Hospitalizations and deaths have followed, with much of the country seeing reduced strain on both intensive care unit (ICU) and overall hospital capacity. While this is great news, continued reduction in natural infection will prolong our time to normalcy. In addition, the past ten days have seen a plateau-ing in the decline. It is too early to tell whether this is just a short pause, a transition to a flatter trajectory, or the warning signs of another peak yet to come.

The Pace of Vaccination Continues to Improve

Vaccination pace has continued to improve in the US. As of this writing, 107 million shots have been administered and the current average daily rate is 2.4 million shots per day (with one day reaching 2.9 million). In addition, the percent of the supply being utilized is on the rise across the country, with a current average of 79 percent (up from 63 percent a month ago). These improvements are likely driven by a combination of increased allocation and improved operational efficiencies. With supply increasing (see below) and continued efforts at improving administration, there is reason to believe we will see continued improvement here.

Our Vaccine Supply is Expanding

The Biden administration announced they anticipate having enough supply to vaccinate any willing adult by the end of May. This represents an improvement of two months over prior similar statements. Multiple factors have led to this improvement. One factor is that Johnson & Johnson received an Emergency Use Authorization (EUA) for its one-shot vaccine on February 27 and first doses were administered on March 3. Johnson & Johnson (J&J) has committed to delivering 100 million shots by the end of July and the Biden administration recently announced plans to purchase 100 million more doses. Another is that the Biden administration has secured an additional 200 million doses of Pfizer and Moderna, bringing the total expected number of doses to 600 million between the two manufacturers. A third factor is that both Pfizer and Moderna have publicly stated they are rapidly working to increase production capacity in the coming months.

We’ve refined our vaccine assumptions given these developments and overlaid them with new case rates that appear more consistent with the current trajectory.

Our revised analysis suggests we are likely to achieve pHIT in the US on average in early summer (mid-June to early July) if vaccinations continue to hold to the optimistic scenario. Moreover, we expect hard-hit states in the Northeast to reach pHIT months earlier than states that have not suffered as much, with much lower reliance on vaccinations to get there (for state-by-state animation of progress to pHIT click here). At this point, several questions will matter most in determining when we reach normalcy and what the impact will have been by the time we do:

What will Happen with Case Growth?

Will we see continued declines in cases driven by ever-increasing vaccinations, continued focus on measures that work (such as mask-wearing and distancing when inside), and warmer weather which allows people to spend more of their time in the safer outdoors? Will we see a flattening trajectory punctuated by outbreaks driven by overall pandemic fatigue coupled with rapid removal of restrictions (such as Texas’ Governor Greg Abbott’s announcement ending a state-wide mask mandate and the reopening of all businesses at full capacity)? Or will we see a spring surge fuelled by significant spread of the more transmissible and deadly variants? Only time will tell which of these scenarios will manifest themselves. But until we have vaccinated the vast majority of those at greatest risk of severe illness, hospitalization, death, faster case growth, and a shorter timeline to herd immunity will come with a severe cost – over-run hospitals and high death counts.

How Willing Will People Be to Get the Vaccine?

With our vaccine supplies growing and administration efficiency improving, the key question returns to one of willingness. Most recent surveys have shown an increase in the overall US population’s willingness to be vaccinated (nearly 71 percent in the most recent surveys), but the numbers are still uneven across political and racial lines. In Europe, vaccine hesitancy is already proving problematic (for example, in France) and there are multiple reports of people refusing the AstraZeneca vaccine due to its lower efficacy than that of Pfizer and Moderna. It will be critical for willingness to continue to improve (particularly in states with low rates of natural infection that are reliant on high vaccination rates to achieve herd immunity) and for that willingness to extend across all available vaccines. While efficacy at preventing symptomatic illness varies, all of the available vaccines have proven astonishingly effective at reducing hospitalization and death. Ultimately, it is the reduction in mortality and the relief on our health system that will allow us to return to normal.

What Will the Ultimate Impact of the New Variants Be?

We have accounted for the broad spread of a more transmissive variant, but there is not yet enough data to provide clarity on the likely cumulative impact of all of the emerging variants on 1) hospitalization and mortality rates, 2) infection among children, and the potential need to reconsider approaches to school openings/closures, 3) vaccine and therapeutic efficacy, and 4) reinfection likelihood. We will need to track the evidence closely (as well as monitor for the emergence of any other critically differentiated variants) to refine policy decisions, treatment protocols, and estimates for timing to normalcy. This is a true wild card – implications can be as wide-ranging as a few weeks longer to normalcy and/or a (relatively) simple required booster in a year, to a catastrophic scenario where prior infection and vaccination with existing vaccines provides no protection against infection with the new variants.

While the past month has certainly brought many positive developments and a more promising outlook on the return of Normalcy, there are ongoing risks to our progress that require continued fortitude and commitment from everyone to manage. On the bright side, while our analysis suggests that we will – on average – reach herd immunity threshold in the early summer in the US, we expect to see the benefits of vaccinating older and vulnerable populations sooner, leading to a significant reduction in the population average infection fatality ratio. As more vulnerable populations become vaccinated, the number of cases leading to hospitalizations or deaths is expected to decrease significantly. The reduced strain on our public health system and the death toll may signal behavior to begin trending towards a new “normal” sooner, and restrictions may begin to be lifted before achieving the herd immunity threshold.

We will continue to update our perspective as more information becomes available. 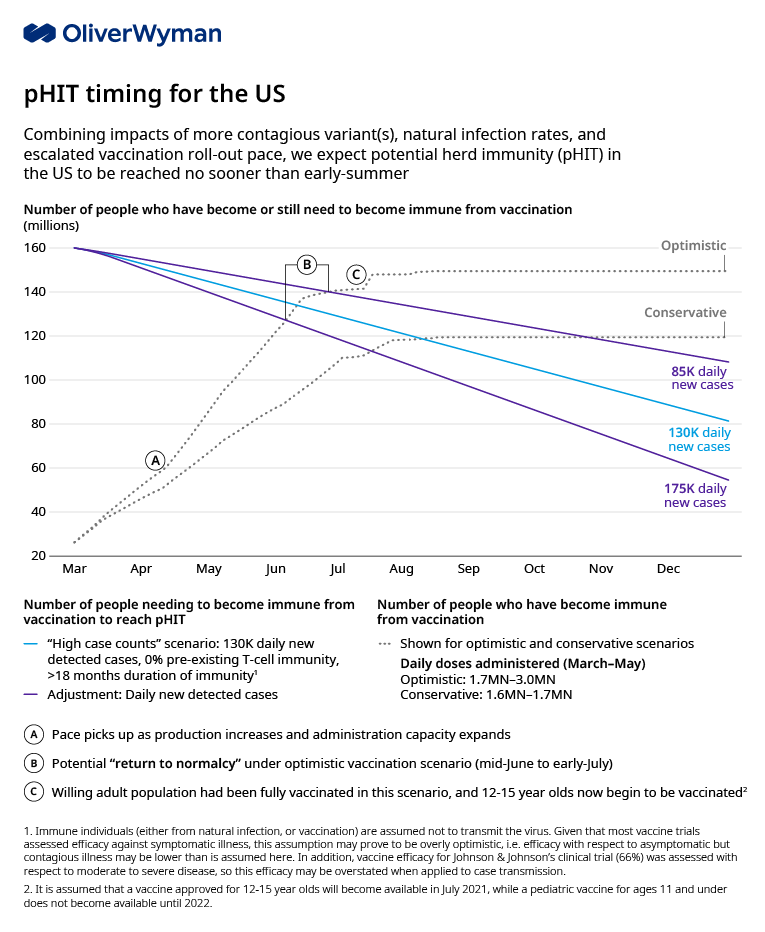 Subscribe
How to Support Mental Health in Times of...
The Great Behavioral Health Challenge
How COVID Lockdowns Impacted Pharmaceutical Sales