Key Takeaway
Our revised analysis suggests we are likely to achieve pHIT in the US on average in late summer. #OWHealth
Share

Editor's Note: 25 January 2021: This page was originally published in November of 2020. As the nature of the COVID-19 pandemic changes (case counts, new strains, and vaccine availability and efficacy) we will continue to update the content and graphics in this article.

When we wrote Navigating the Long Haul to Normalcy in November, we committed that as the landscape changed and new data emerged, we would continue to update our perspective on likely timing to normalcy and the key contributing factors. In our December update we discussed the impacts of 1) the fall surge, 2) Pfizer and Moderna approval, and 3) the unexpectedly high vaccine efficacy. All together, these developments narrowed the possible paths to achieving herd immunity and suggested we might achieve potential Herd Immunity Threshold (pHIT) in the United States as soon as June.

In the month since that update, the landscape has continued to evolve, complicating the picture:

First, the surge continues with very high daily new case rates and overwhelmed hospitals across the country: Case rates, hospitalizations, and daily deaths continue to set records. Daily detected new case rates have exceeded 150,000 since November 15th, with two stretches of between two and three weeks where they exceed 200,000. We are accelerating towards herd immunity, but at a tremendous cost – the US has surpassed 400,000 deaths since January 18th. With intensive care units (ICUs) across much of the US out of capacity and the healthcare system collapsing in the hardest hit geographies (for example, paramedics in Los Angeles County were told not to transport patients with low likelihood of survival to hospitals; ambulance crews waited up to eight hours to offload patients), not only is the COVID-19-related death toll likely to climb, but so is the excess mortality rate.

Second, there’s an emergence of new SARS-CoV-2 variants: The recently discovered United Kingdom variant with a nearly 55 percent greater transmission rate carries significant implications for timing to normalcy. Scientists have projected it’s likely the UK variant will become the dominant form in the US by March. This is likely to further increase daily case rates, but more importantly, it will also increase the threshold (pHIT) we need to reach from 50 to 60 percent to 67 to 75 percent, delaying the return to normalcy in the US by 1.5 to 2.5 months. As of now, evidence suggests that existing vaccines will be effective against the newly emerged variants from the UK and South Africa (though perhaps slightly less so), but more data is needed to understand both vaccine efficacy and protection from prior infection for these as well as the Brazil variant. Any significant impact to either would also have an impact on timing to normalcy.

Third, vaccination is proceeding, albeit slowly: Nearly 21 million shots have been given in the US as of this publication (representing nearly 6.5 percent of the US population). While these numbers track within the band of our predictions, they will need to accelerate between February and March in order to hold to the optimistic scenario. The vaccination progress is also uneven across the US. Combined with the geographic clustering of natural infection, this suggests that normalcy will be achieved at different times across different regions of the US. States less hard hit by natural infection, such as Vermont, Maine, and Oregon, will be more reliant on vaccinations to achieve herd immunity threshold than harder-hit areas like New York and Massachusetts, where we estimate over 20 percent of the population has developed immunity through natural infection.

Fourth, more vaccine approvals may be coming: Anticipation remains high for the approval of additional vaccines which could help shore up the current shortages, particularly given an anticipated gap in Pfizer availability in the spring. Johnson & Johnson has announced they are aiming for an Emergency Use Authorization (EUA) application in February and a goal of 100 million doses available to the US by April (though there may be a reduction on the number of doses anticipated to be available in February). This would dramatically improve supply and would also simplify logistics given this vaccine requires only a single dose and does not require extreme cold storage. The remaining front runners are more likely to come in the Spring, as AstraZeneca has stated an EUA application is likely in April and Novavax’s phase III trial is delayed by months due to manufacturing delays.

Taken together, these factors bring greater uncertainty back into our path to normalcy.

Our revised analysis suggests we are likely to achieve pHIT in the US on average in late summer – if vaccination continues to hold to the optimistic scenario. Moreover, we expect hard-hit states in the Northeast to reach pHIT months earlier – potentially up to six months earlier – than states that have not suffered as much.

At this point, there are several questions that will matter most in determining when we reach normalcy and what the impact will have been by the time we do:

First, how “hot” will we continue to run? Spurred on by travel and gatherings over the holidays, tremendous fatigue from the pandemic, and polarized perspectives on mask wearing and social distancing measures, we have lost the tenuous control we had over the virus in the early summer. With our health systems overwhelmed and a new administration just beginning – will we see new measures and greater compliance to slow the pace of natural transmission and ease the burden on our hospitals?  The Biden administration has called for 100 days of mask wearing across the US and has pledged to work with local authorities on mask mandates and dramatic scaling of testing infrastructure to help contain spread.

Second, how fast can we produce, distribute, and administer the vaccines? Given what has been observed in the first month of vaccination, it is clear there are multiple hurdles to overcome (such as the effective and efficient logistics of registration and administration, increasing population willingness to be vaccinated, and strained capacity). The Biden Administration has pledged to deliver 100 million shots in the first 100 days of the administration by deploying additional national resources (like FEMA, the National Guard, and the US Military), establishing additional federally run vaccination centers, launching public education campaigns, and authorizing the Defense Production Act to speed up production of vaccines and the needed supplies for vaccine administration. Time will tell how effectively these measures can impact the pace of vaccination and the dwindling supply of doses. There is also urgent need to begin targeting the emerging inequities of vaccine distribution (driven by differences in access, understanding, and willingness) which are being overlaid on top of the significant inequity of the impact of the disease itself.

Third, what will the ultimate impact of the new variants be? We have accounted for the broad spread of the UK variant, but there is not yet enough data to provide clarity on the likely cumulative impact of the UK, South African, and Brazilian variants on 1) disease severity and mortality rates, 2) infection among children and the potential need to reconsider school opening approaches /closures, and 3) vaccine and therapeutic efficacy. We will need to track the evidence closely (as well as monitor for the emergence of any other critically differentiated variants) to refine policy decisions, treatment protocols, and estimates for timing to normalcy. This is a true wild card – implications can be as wide-ranging as a few weeks longer to normalcy and/or a (relatively) simple required booster in a year, to a catastrophic scenario where prior infection and vaccination with existing vaccines provides no protection against infection with the new variants.

While the desperately awaited return of Normalcy continues to draw closer and there are bright spots along our path for the US, there is no mistaking that the next few months will continue to present tremendous challenges and require continued fortitude and commitment from everyone to maintain the control measures known to be effective against spread: masking, social distancing, and hand washing. We will continue to update our perspective as more information becomes available.

When will we return to normal?

Depends on case counts and vaccinations

To return to some sense of normalcy, we must achieve the potential Herd Immunity Threshold, pHIT, or the point where there is enough cumulative immunity present in the population to slow the natural reproduction rate of the virus. Daily case counts and the pace of vaccination majorly impact when that threshold is met. The below graphic shows how three different case count rates affect pHIT timing. The vaccination scenario band represents a range of different vaccine scenarios. 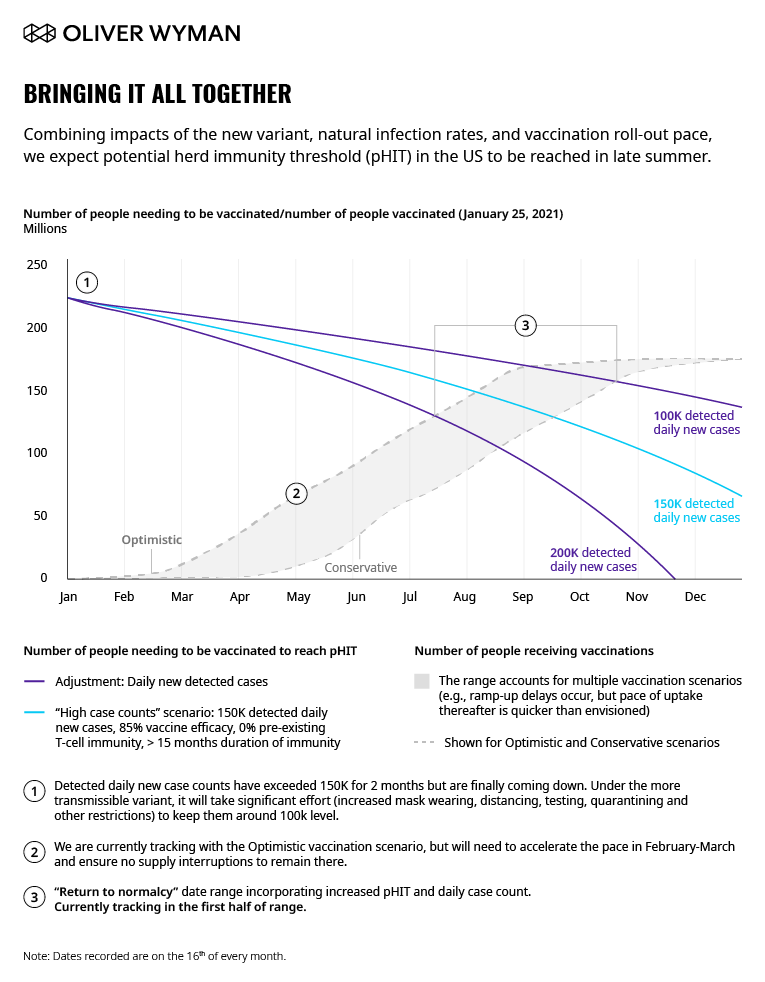 Subscribe
The Global Disparity in COVID-19 Vaccines is...
Gender Gap in Accessing Mental Health Support
Get Ready for the Post-Pandemic Healthcare...