Editor's Note: The following article was originally published on OliverWyman.com.

On October 30th, 2020 the Centers for Medicare & Medicaid Services (CMS) released Part II of the Advance Notice of Methodological Changes for 2022 for Medicare Advantage (MA) Capitation Rates and Part C and Part D Payment Policies. Their stated intent for an earlier than usual publication was to provide additional stability to the Medicare Advantage and Part D programs amidst uncertainty from the COVID-19 public health emergency. This early release of the Advance Notice also allows CMS the opportunity to publish the CY2022 Rate Announcement as early as January, as opposed to the typical April release, while maintaining the 60-day comment period. CMS has indicated they may arrange the CY2022 Final Rate Announcement into an earlier Part I release with a Part II publication in April. While there is much to consider in the Advance Notice, Medicare Advantage Organizations (MAOs) should exercise caution in making decisions based on this information, as there is always the possibility that the Final Announcement(s) could differ meaningfully from the Advance Notice.

CMS projects an increase of 4.82 percent to the National Per Capita MA Growth Percentage, which is not as large as the increase from the 2021 Final Announcement of 5.62 percent. In addition, the FFS non-ESRD USPCC rate is projected to increase by 4.52 percent over the 2021 rate. The increase in the USPCC rate includes a projection of costs from 2021 to 2022, but it also includes a restatement of the historical experience when considered against the 2021 Final Announcement. So, if there is an upward or downward restatement in the cost for the current year (such as 2021), then that adjustment flows into the USPCC rate increase estimate for the performance year. Although CMS recognizes a large reduction in cost for 2020 as a result of the COVID-19 public health emergency, the new cost estimates for 2021 are slightly higher than was projected in the 2021 Final Announcement, with almost no difference between the two aggregate 2022 cost estimates. The chart below shows the level and source of USPCC revision between the Advance Notice and Final Announcement from 2016 through 2021. 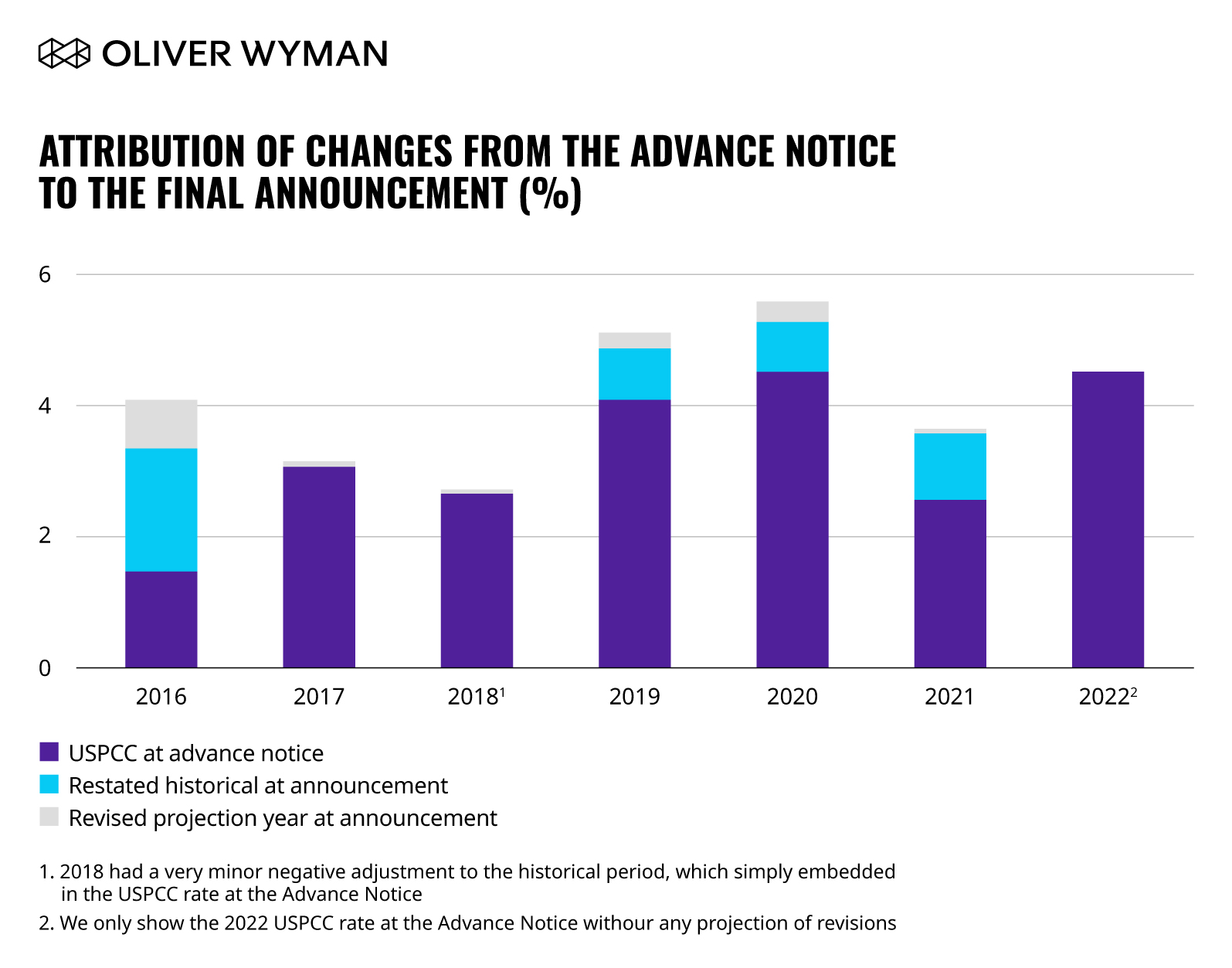 As the chart shows, most of the USPCC rate revisions result from restatement of historical data rather than updates to the projection between the performance year and the year preceding it. Given CMS’ indication that rates may be released in April, the potential for new information between now and then, and uncertainty around the COVID-19 public health emergency, there is a strong possibility that the 2022 rates will see meaningful revision in the Final Announcement.

CMS is proposing several key changes related to the Quality Bonus Payment Program (i.e., Stars) in response to the COVID-19 public health emergency, which was recognized as a nationwide FEMA major disaster declaration. Nearly all contracts will qualify for disaster adjustments on the 2022 Star Rating (which impact 2023 revenue) under the Extreme and Uncontrollable Circumstances Policy. Affected contracts will receive the higher of their measure-level ratings from 2021 or 2022 on non-CAHPS measures.

Additionally, CMS has revised the definition of a “new MA plan” for CY2022 quality bonus payments only. MA contracts offered under a parent organization without another MA contract in the prior four years will be considered new, primarily affecting contracts that started in 2019. CMS has also delayed the implementation of guardrails on measure cut points until 2023 Star Ratings. Finally, CMS has proposed a new measure related to COVID-19 vaccination administration. The measure would be on the display page beginning with the 2023 Star Ratings and subsequently become part of the CAHPS measures.

While Part II of the Advance Notice did not contain a Part D Annual Percentage Increase (“API”) value, which is necessary for determining the updated Part D benefit parameters, CMS did provide an update to the RxHCC risk score model. The new 2022 RxHCC model will replace the 2020 RxHCC model (CMS did not issue an updated Part D risk score model in 2021). Most notably, the model will transition from using 2014 diagnoses data paired with 2015 drug data to relying on 2017 diagnoses data paired with 2018 drug data to calculate the coefficients. CMS estimates the normalization factor for the new RxHCC model will be 1.056. The model recalibration also resulted in a few notable shifts in RxHCC coefficients, as well as the addition of a coefficient (previously 0) for three RxHCCs for the community, non-low income (NLI) aged group for developmental disabilities / developmental disorders.

Other meaningful changes for the community, NLI, aged group are as follows:

MAOs should expect to see non-trivial changes between 2021 and 2022 in their members’ Part D risk scores. The change in coefficients reflects the investments of drug companies between 2015 and 2018 in specific therapeutic classes, as well as the increased competition in the Hepatitis C space, which has decreased costs and reduced the corresponding coefficient. Many common disease states saw only moderate shifts, with the cancer-related RxHCCs being the exception. Health plans with large Part D bid amounts (such as D-SNPs or hyper-rich general enrollment products) should pay particular attention to these changes in order to capture an accurate risk score, while health plans such as stand-alone PDPs and $0 MAPD plans may have less incentive to invest in Part D diagnoses coding.

For CY2022 risk scores that determine payments to plans, CMS is proposing to fully phase-in the CMS-HCC payment condition count model that was first implemented in CY2020. CMS is also proposing to discontinue the use of Inpatient RAPS data that supplemented the encounter data used as the source of diagnoses. Although CY2022 risk scores are moving to 100 percent encounter data with the removal of Inpatient RAPS data and 100 percent weight on the 2020 CMS-HCC model, CMS expects this transition to increase revenue a quarter of a point. These changes were expected based on Part I of the CY 2022 Advance Notice that was released on September 14th, 2020.

Within Part II of the Advance Notice, CMS estimates that the 2022 Part C Normalization factor for the 2020 CMS-HCC model will be 1.118. This is the result of seven years of FFS risk score trend which CMS projects to be 1.61 percent annually. This annualized trend is up from 1.55 percent and 1.34 percent as estimated in the 2021 and 2020 Advance Notice, respectively. CMS cites the drivers of the increasing normalization factor to be changes in FFS demographics, implementation of ICD-10, increasing penetration of alternative payment models in FFS, and the change in the case mix in FFS.

CMS has indicated they plan to update the filtering methodology for identifying risk adjustment eligible diagnoses on FFS claims from a specialty-based logic to a HCPCS-based logic. They have estimated the impact will be an average payment reduction of 0.08 percent ($200 million dollars in net savings for Medicare).

Subscribe
Addressing Affordability in the ACA Market
The Financial Aftermath When Drug...
Availability of Free Bronze ACA Plans on the Rise