How to Rebuild Trust and Win the Pandemic Battle

Editor's Note: The following article was originally published on Brink.

The coronavirus isn’t just a public health crisis. It’s a crisis of confidence in our institutions. Trust in national governments has declined significantly in many countries since the pandemic erupted, and in many countries, people have become less willing to share health and other data to contain the spread of the virus.

In research conducted by the Oliver Wyman Forum in June, only 47 percent of American respondents said they would be comfortable sharing their health information to help contain the pandemic, down from 54 percent in March. Declines were sharper in Australia and Germany, although the willingness to share health data was higher than in the United States. People are even more reluctant to have data collected for other purposes, such as addressing societal challenges.

This poses an urgent challenge both to governments seeking public cooperation with containment efforts and to companies looking to restore the vitality of their business. They need to tackle the trust issue head-on by making a strong case for data-sharing and by providing more transparency about the ways in which data is used and privacy is protected. New regulations and standards can support those efforts, but self-regulation by the private sector can be just as important. 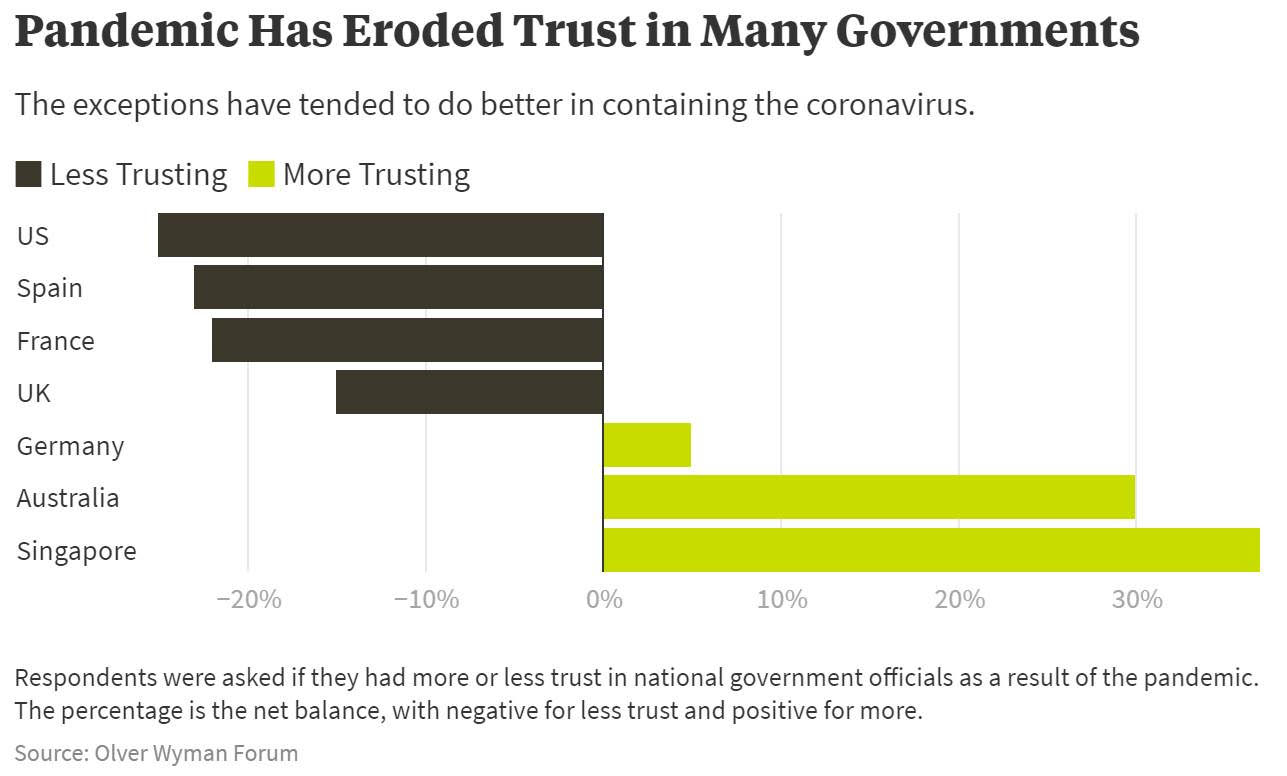 Even more worrying is a decline in trust in institutions. Forty-four percent of American respondents said they had less trust in federal government officials as a result of the COVID-19 crisis, while only 19 percent said they had more. That amounted to a net balance of 25 percent losing trust — a trend also seen in the United Kingdom (15 percent), Spain (23 percent), and France (22 percent).

While trust did decline in some countries, it did not fall everywhere. It’s instructive to note that trust in national government officials rose in Germany, Australia, and Singapore. All of these countries have been successful in managing the virus.

Therein lies a lesson: Success at combating the virus can build trust.

Policymakers and business leaders should send a clear and consistent message: Saving lives and saving livelihoods go hand in hand. Bringing the virus under control is an essential precondition for reviving the economy and getting people back to work and kids back to school.

Officials in Singapore emphasized this message when they extended and tightened lockdown measures in April and May following a surge of infections. In a national address, Prime Minister Lee Hsien Loong acknowledged the moves would be painful for many businesses and workers but added, “I hope you understand that this short-term pain is to stamp out the virus, protect the health and safety of our loved ones and allow us to revive our economy.”

Second, policymakers need to demonstrate that sharing data will save lives and help reopen the economy, which in turn will save companies from bankruptcy. There’s no shortage of evidence for that. Oliver Wyman’s Pandemic Navigator, which models the impact of health policies, shows that increased testing and tracing-led suppression measures — and behaviors like social distancing and wearing face masks — reduce both the amount and volatility of health and economic damage.

There is no one-size-fits-all approach to data-sharing given countries’ different cultural and legal traditions. South Korea beefed up its public health defenses against infectious diseases after an outbreak of Middle East Respiratory Syndrome, or MERS, in 2015. Health authorities are now using everything from closed-circuit television to mobile phone and credit card records to trace and isolate people who have been in contact with infected persons.

The country also requires anyone entering from abroad to self-isolate for two weeks and download a mobile app to ensure compliance. Such measures are draconian by the standards of most Western countries, but Koreans accept them in good part because they have been proven to work. Even after a rise in infections in August, the country’s cumulative COVID-19 case count stands at just over 26,000, less than the daily average in the United States.

Australia and Germany also have taken an evidence-based approach and been relatively successful in containing the virus while using less-stringent methods. Prime Minister Scott Morrison and Chancellor Angela Merkel have called on their citizens to take the virus seriously, and both countries have promoted the voluntary use of contact-tracing apps as part of their containment strategies.

Third, proactively describe the mechanisms adopted to safeguard people’s privacy. Our survey finds that majorities in all seven countries — the US, France, Germany, Spain, the United Kingdom, Australia and Singapore — would be more willing to use a contact-tracing app if data wasn’t stored on government computers, if technical measures were in place to preserve as much privacy as possible and if legislation limited the use of data.

Respondents also were more likely to use a contact-tracing app if it were developed by public health authorities rather than government or big tech companies.

Germany’s Corona-Warn-App uses technology developed by Apple and Google, but it was launched in partnership with the Robert Koch Institute, the country’s public health body. The institution publishes its privacy principles and makes clear that the app’s decentralized approach leaves data on users’ phones rather than in centralized databases. The app has been downloaded more than 18 million times since it was launched in late June — a number equivalent to more than 20 percent of the German population — an impressive share given the low rates of adoption in other countries.

Finally, policymakers have to keep the long term in mind as they frame their actions. Many European countries are experiencing a big second wave months after the first, and infections are surging for a third time in the United States. That suggests governments need to maintain the public’s cooperation with suppression measures for months — and possibly years.

To do this, governments should partner with academics and the private sector, where appropriate, to agree on principles of safe development, use, storage, and elimination of data consistent with national regulations. This should be done in a transparent manner, gathering input from citizens throughout the process.

To win acceptance, they should employ broad public awareness campaigns to educate citizens on the benefits of apps. Governments also should commit upfront to eliminating track-and-trace requirements once a vaccine is widely available. That can help alleviate fears that apps might serve as a gateway to a mass surveillance society.

Governments also have to work closely with the private sector to keep their containment measures closely aligned. Companies should show that they are using consumers’ data responsibly through measures such as transparent codes of conduct and ethics councils. A consistent message from the public and private sectors is the best way to maintain support for suppression measures and avoid confusion.

The battle to promote data sharing isn’t lost, but governments and companies need to show they’re serious about winning it. That means being much more open with people about the health and economic benefits of sharing data and the protections being used to safeguard privacy.

Subscribe
Asia’s Digital Hospitals of Tomorrow
Will Smart Containment Save the Economy?
Navigating the Long Haul to Normalcy