Our Work Lives Will Not Return to Normal After the Pandemic

Key Takeaway
"Showing how you, as a leader, protect your own wellbeing gives permission to your people to do the same." #OWHealth @wef
Share

Editor's Note: This article first appeared in the World Economic Forum Agenda and on Oliver Wyman.

What a double-edged sword hope can be. When the pandemic first struck, it fuelled our efforts to unify and overcome a crisis of unknown proportions. But now the hope has been somewhat dashed, and this is testing even the toughest organizations.

The sprint is turning into a marathon. As a result, organizations that continue to encourage false hopes that they will get back to 'normal' now find they have tired teams on their hands, tumbling employee engagement scores, and a general lack of faith in timeframes.

Organizations often need shocks forced upon them but the case for change is ironclad in the current situation. Those that fight to get back to where they were find that the more they fight, the more their team’s resolve is reduced and their ability to thrive is impeded.

There is a better approach. Organizations that recognize and embrace ambiguity as a constant seize the day and become entities that continuously sense, learn and stay connected to new trends and dynamics.

Instead of instilling the artificial belief that life will get back to the way it was, these leaders confront the sour reality that working may never be 'normal' again. They focus instead on developing individual, team and organizational resilience, and then hunt for opportunities to elevate their performance.

Here are three ways to focus such an approach:

One of the most dangerous things leaders can do in the current environment is to create a misconception that the current situation will change. By doing so, they set their people up to feel punished every time a deadline passes.

What’s happening has parallels to the challenges military personnel face when they are under siege or in captivity. After being released from seven years in captivity in Hanoi, United States Admiral James Stockdale attributed his ability to survive to the fact that he accepted where he was, and while he knew he would eventually prevail, he avoided setting false horizons. The people who did not survive were the optimists who continued to set expectations for when they would be released – only to be repeatedly disappointed after that deadline came and went.

Be honest about what is not known. Urge people to trade in facts, not optimism. Too many leaders are preparing their workforce for another potential fall by saying “we will be back to normal by January 2021” despite tremendous ambiguity. While leaders understandably want to give their people certainty, if they guess in the current environment, they will likely be wrong.

Instead, admit you don’t know and explain that you are dealing in several different scenarios. Avoid setting deadlines and focus instead on sharing the contingencies you are considering. That way, your team can expect ambiguity rather than focus on false dawns based on uninformed deadlines.

Then set a North Star and give your people freedom to pursue it. Business leaders keeping their people motivated aim much higher than returning to business as usual. They describe outcomes or problems they want to achieve or solve, and then stop short of telling their people how to do it. This encourages creativity, adaptability, ownership and innovation. It also allows the whole organization to work the problem.

Build an inclusive and sustainable environment for people to give their best. Making people feel psychologically safe is difficult when millions of people are being laid off. These days, many employees hide how they feel. Instead of safeguarding personal boundaries, many respond when their boss sends them an email late in the evening.

While this worked when organizations rapidly put out fires in the first few months of the pandemic, such a level of performance is proving unsustainable.

The Yerkes-Dodson Law concerning the empirical relationship between pressure and performance posits that when pressure increases, so will a person’s performance – but only up to a point.

As stress continues, people typically pass through four zones: in the first zone, they are “activated”. Next, they begin to feel “in the flow” and at their peak performance. But if pressure continues to rise, many people enter a third zone of becoming “distracted” before possibly moving into “shutdown mode,” from which they may not return. And that’s just what we are seeing in many organizations now.

Leaders need to create an environment in which they, and their employees, feel safe enough to exercise choice in an effort to protect their resilience without fear of judgement or retribution. People need to feel they can establish and protect the boundaries between their work and life. Working at home can not mean living at work.

Take the first step by taking stock and setting limits that will preserve your own sustainable performance. Managers should ask themselves where they are on the Yerkes-Dodson Curve and how they can avoid drifting into becoming “distracted” or even worse, shutting down altogether. Resilience is not a trait. It can be learned so long as people feel safe exercising their ultimate freedom – how they choose to respond to pressure. Some people find they can enhance their resilience through exercise, others through music or connecting with family and friends. 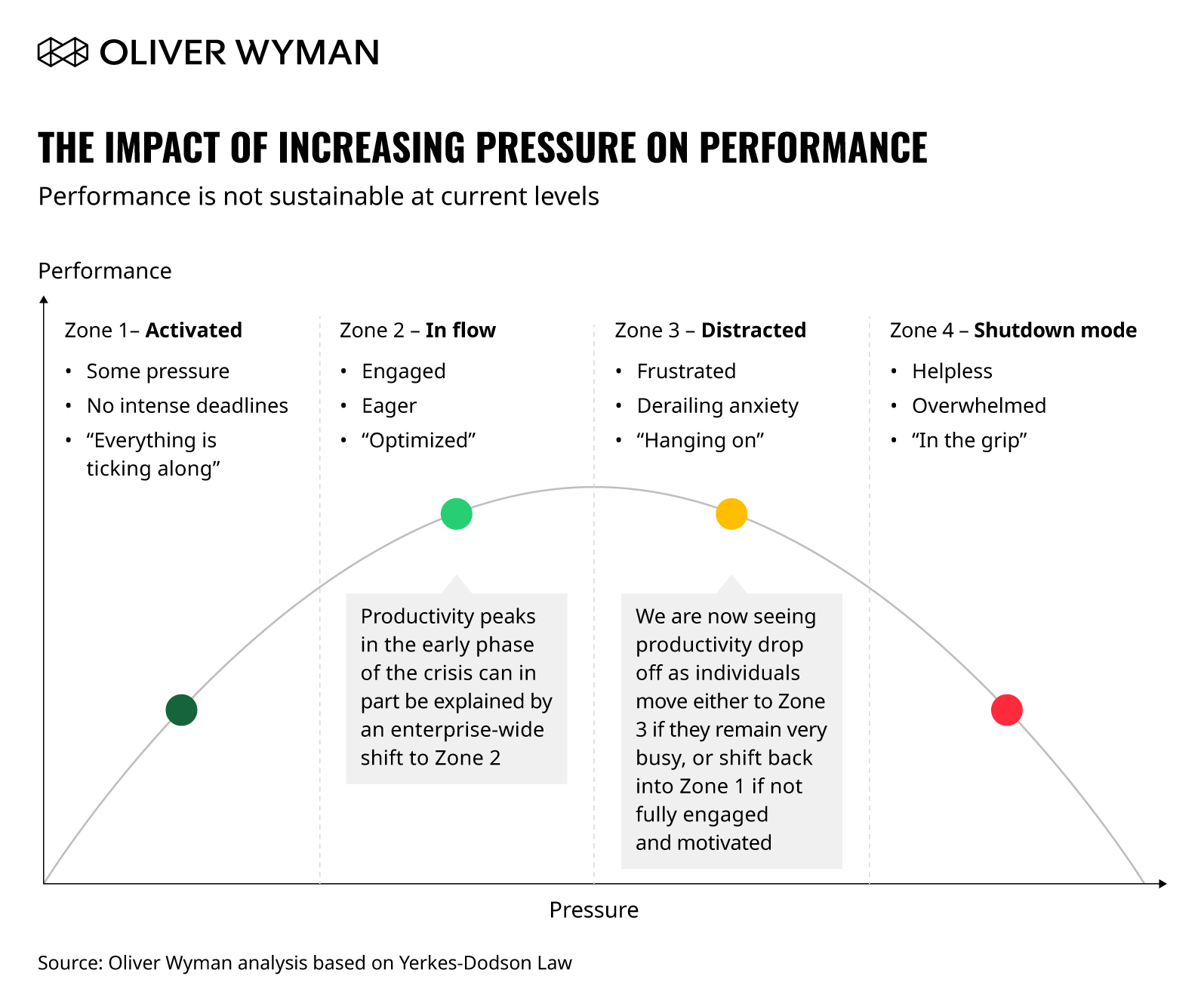 Showing how you, as a leader, protect your own wellbeing gives permission to your people to do the same. Employee engagement scores plummet in organizations where leaders work all hours because their employees follow their example.

By contrast, one financial services firm confronting falling employee engagement scores and increasing wellbeing issues found its employees opened up about their stress once managers made it clear they should feel safe to set boundaries, with a view to being able to give their best while working from home.

Avoid the insensitive and myopic focus on results to the detriment of others and be willing to push back when others threaten to challenge the boundaries you set for yourself.

Leaders must fight the temptation to fall into the 'competency trap'. People naturally like to get better at what they are already good at; but the more expert they become, the tougher it is for them to change.

Tapping their knowledge feels better than exploring new ways of doing things. That’s a problem in the current environment, because many of the old methods no longer work. Customer journeys are being remapped, and the competitive landscape is more dynamic than ever.

These, and other aspects of organizational life, will continue to move at an unprecedented pace. So it stands to reason that any organization waiting to slot back into the old rhythm and ways of working will become obsolete.

The velocity of change in our world also suggests that only humble learners who enable their people to stretch and grow sustainably will remain relevant as leaders. As Peter Drucker once famously said: “The greatest danger in times of turbulence is not the turbulence. It is to act with yesterday’s logic.”

Subscribe
Get Ready for the Post-Pandemic Healthcare...
The Future of Academic Medical Centers
Outlook on Climate Change as a Healthcare Crisis