Earlier this month, as part of J. P. Morgan Healthcare Week, hundreds of healthcare transformers attended Mayfield and AWS' Health Innovator Summit: Conversations on Accelerating Innovation, in San Francisco at the AWS Loft. Attendees included leaders from hospitals and pharma companies as well as entrepreneurs and innovators. Panelists who participated in a series of discussions over five hours included the Food and Drug Administration (FDA), Stanford, CNBC, the American Medical Association (AMA), 23andMe, the University of California Health System, Sutter Health, and Oliver Wyman. Here’s more on some of the most memorable key takeaways, including a panel on provider perspectives moderated by Oliver Wyman.

The FDA is currently undergoing a digital transformation, said Amy. The FDA, whose actions affect 20 percent of the greater economy, will open their data in time and is working to standardize interfaces where information is submitted, she said. Indeed, the FDA recently launched an app late last year called CURE ID for healthcare professionals to report their experiences treating infectious diseases and use crowdsourcing to help save lives and develop new types of drugs.

Overheard at #jpm20 #JPMHC20 (#FDA’s cio) about real-world evidence in #healthcare: to make change happen at the fda, people must get promoted for taking risk. But to what extent should you de-risk innovation in government? Start to develop frameworks, advises the fda. pic.twitter.com/zAPpO1J70A

Said Amy, expect to see lots of healthcare data converging into one place in the future. 21st-century cures in particular, she stressed, have specifically compelled the FDA to better understand how to use real-world evidence to help improve care delivery, while also ensuring the lessons learned are spread across an even playing field. The FDA can’t approve products in a static way and the traditional product pathway is now outdated thanks to the fast pace of digital health. But, real-world evidence, she said, shouldn’t lower the bar.

“Collecting individual data at the FDA is very hard for us because we don’t have the internal infrastructure ready right now to pull in all of that data. Hence the reason for our technology modernization activities is to get us ready to collect more information at scale,” she said. The FDA is preparing now to enable better surveillance looking at individually structured data for safety surveillance as well as to better understand the efficacy and use of drugs.

Each data set not only has its own context but must be considered amidst the biases that come with it, she said. The public need and public voice are ultimately transforming the greater healthcare industry.

Amy said that in 2020, the FDA will work towards having effective conversations with the Centers for Medicare & Medicaid Services. In terms of what’s next for the organization, she said many new solutions are currently being proposed around the price of drugs in healthcare. These prices, she said, aren’t ones the FDA regulates, however. The FDA, she added, is working to make sure drug pathways are as efficient as possible.

There are Now 21 New Uses for Real-World Data

Said Atul, although the US is spending billions on electronic healthcare records, too few are actually using this data. If we don’t use the data in a safe and respected way, it will be a national tragedy, he emphasized.

Atul announced during this panel that the University of California, which has 5.1 million patients tied to what he referred to as “modern” data, has been working to de-identify 25,000 manually annotated notes for training and testing. Said Atul, his organization has 200,000 employees, with 100,000 receiving care from them – this formula where an academic medical center treats the very people who work there is one he called “the secret sauce."

Overheard at #jpm20 The US is spending billions on #EHR records but too few are using this data. If we don’t use this data in a safe and respected way, it will be a national tragedy. — @atulbutte #JPMWeek #JPMHC20 #DigitalHealth #emrs pic.twitter.com/WewicBl9TY

Why Certain Companies are Built-to-Last

Panelists discussed leadership development. The overall consensus was that empowered decision-making should go throughout an organization, from the bottom all the way to the top. Some of the best decisions, it was noted, come from junior-level individuals, who must be given a voice and an opportunity to participate in an organization where hierarchies are flattened. Panelists emphasized a successful organization must have a culture where failing is okay.

Some of the best ideas come from those you serve.

Talk to the front lines in healthcare - nurses, MAs, family members and egad even the patients! #JPM2020 https://t.co/xp41R9hjU9

“We absolutely have de-centralized decision-making. I believe that’s the only way a company can grow and scale,” said Chad. “We try to hire the smartest people we can and get out of their way.”

In terms of why many startups fail, there was consensus that forcing someone to do something will backfire and weaken a company’s chance of survival. And, learning about why a failure happened, without getting ego in the way, said panelists, is the key to creating a company that’s ultimately built-to-last.

Amidst talk of the role diversity and inclusion plays in hiring decisions, a key takeaway was advice to other leaders on not hiring people who weren’t good cultural fits for the greater organization – even if they or their company’s name was recognizable. “Culture,” they said, really starts with the hiring process. Those startups that say they “don’t have enough time” to focus on hiring for diversity, said panelists, are only hindering their own success, as the diversity of thought leads to greater innovation.

Getting Inside the Mind of Providers

The panel began around a discussion of sepsis. Said Jason, “It takes 70,000 deaths from sepsis – which kills one out of two hospital patients – to see one new therapeutic trial.”

Added Lori, there hasn’t been much progress regarding sepsis yet. “We’re a 600-bed, smaller hospital. We’re very focused on blocking and tackling, on some of the basics,” she said. “I’ll be honest, and I’m almost embarrassed to say this – and I don’t know if it’s better than other hospitals around the country – but what’s the one thing we’ve done better in the last years around sepsis? We’ve been religious about handwashing.” Most hospitals, she said, are still working on the basics.

On that note, there was also talk of healthcare in general being simpler all around. For instance, a seemingly little detail like making sure a hospital room has a pull-out couch so a family member has a place to rest while visiting his or her loved one, makes a huge difference. 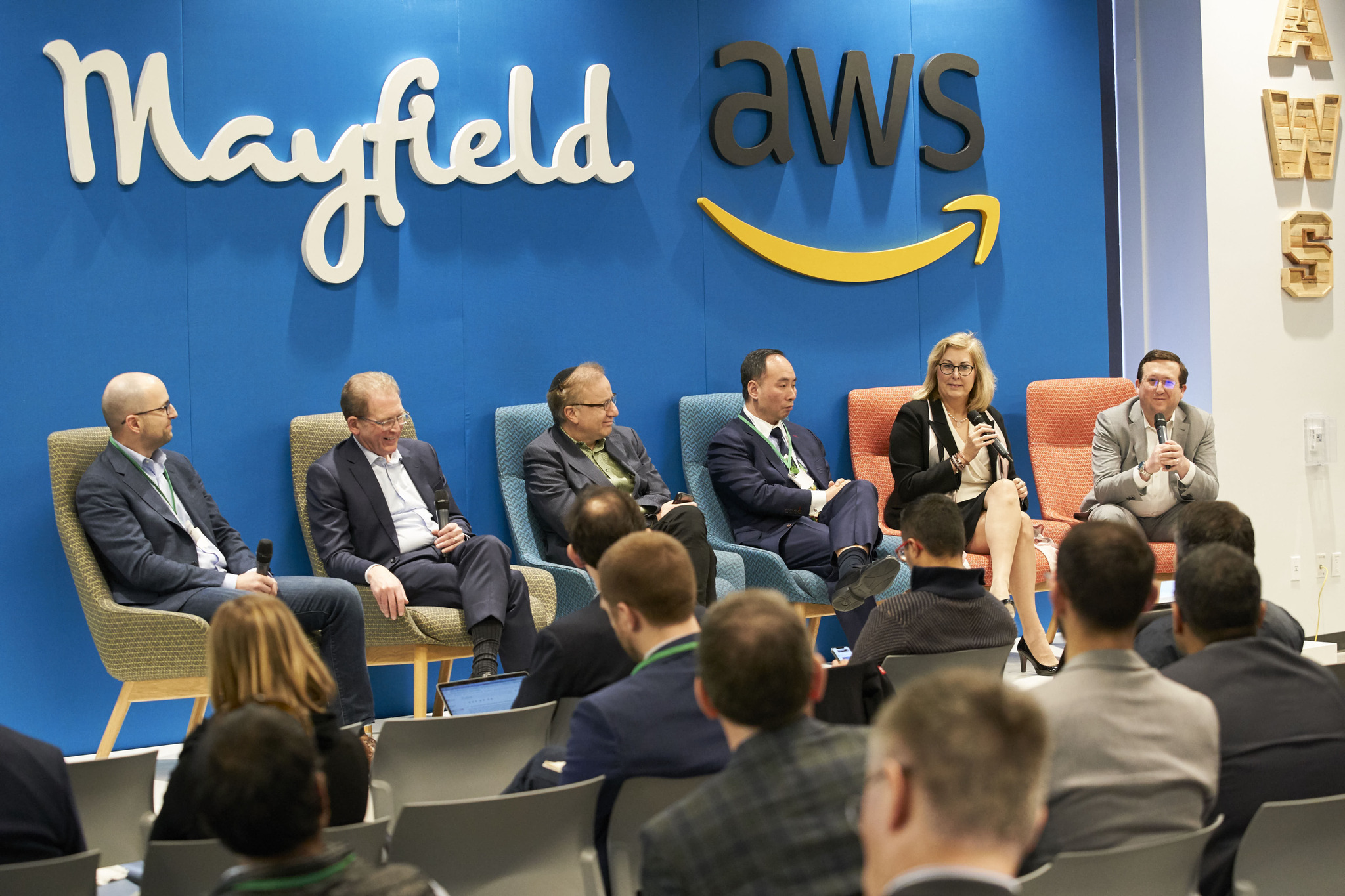 Added Albert on where he sees technology heading next, “Technology can be the great equalizer if done right. Partnering with innovators is the right approach.”

Next, the conversations shifted to medical education, a sector it was argued is in need of much improvement. Said Lloyd, healthcare leaders must envision medical education as a lifelong process, one that doesn’t end once someone leaves academia. He pushed for more people to examine what “lifelong learning” really means – a phrase he said needs more attention across healthcare. Medical education, he said, must involve a more thoughtful dialogue in the future. This new mindset will transform the industry, he said, and medical students are ready for a national conversation about medical education to happen.

The Future Role of the AMA

Last to take the stage was James Madara, MD, Chief Executive Officer and Executive Vice President of the AMA. This chat, moderated by Chrissy Farr, Health and Technology Reporter at CNBC.com, started out with talk of physician burnout.

Said James regarding a time-motion study they did across multiple markets, “For every hour face-to-face with a patient, there are two hours of administrative work and another couple of hours at home at night.”

The conversation then moved to data and outcomes. The next decade of health, said James, needs more interaction in the data domain, whether social determinants of health, virtual scribes, and the like, to tackle fragmentation in healthcare.

The best future role for healthcare technology companies, he said, is to align their work with the realization that data ultimately belongs to patients.

“The patient has to give permission,” he said. “Regulation never keeps up with technology. So you really have to think: ‘Is this something the patient would allow or approve? If so, what’s the evidence?’”

Data rights, he said, aren’t built into an electronic transfer when a patient’s data goes from one hospital to another. More transparency regarding where data goes and flows, he said, will strengthen the industry moving forward.