Healthcare doesn’t have a “women in healthcare” problem. Healthcare has a “women in healthcare leadership" problem. According to Oliver Wyman’s Women in Healthcare Leadership report, despite making up 65 percent of healthcare’s workforce, women only hold around 30 percent of average payer or provider C-suite positions. When you go higher up the corporate ladder into the realm of healthcare CEOs, it gets worse – 87 percent are male. This diversity gap in the C-suite puts incumbents at risk of not creating enough differentiation or innovation to compete in a fast-changing landscape.

As part of Oliver Wyman’s effort to better understand the root cause of this male-female leadership dynamic, we analyzed how healthcare organizations currently fair when it comes to female representation at the top. What does gender distribution look like among leadership? And not only what does it look like, but why does this gap exist? To answer these and other questions, we built a database of over 3,000 executives across 134 payers and providers representing 70 percent of the industry’s revenues. We found nearly 25 percent had what we defined as “higher female representation” in their C-suites (meaning over 40 percent of their C-suite positions were filled by women). Here's a summary of what else we learned: 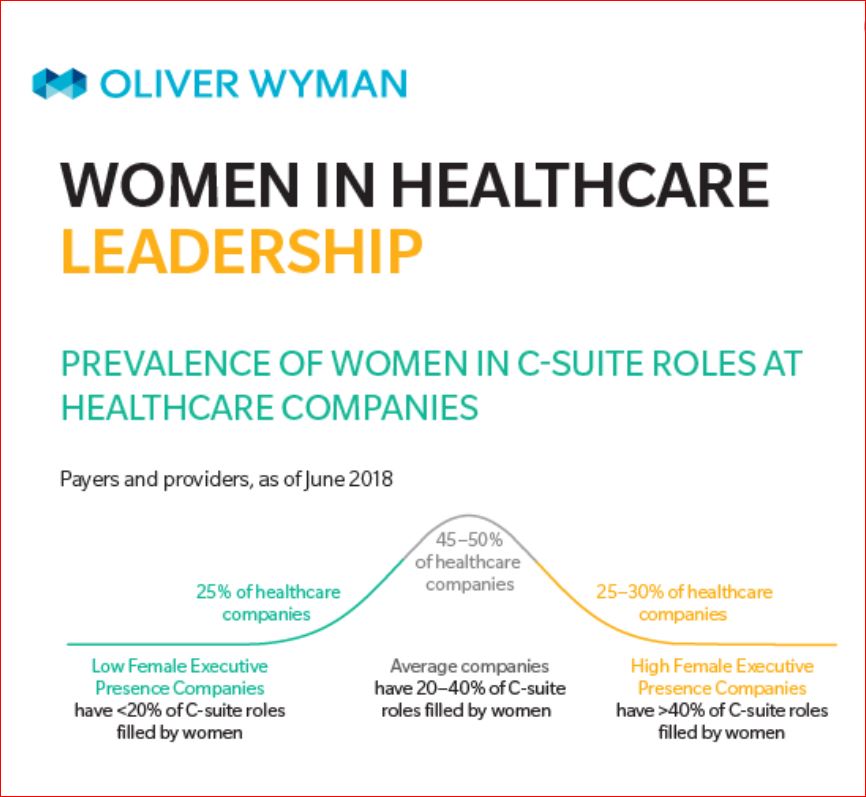 Four Big Research Findings (Some of Which Surprised Us)

Through our research, we also sought to understand if there were certain commonalities between leaders at the top versus the bottom. Let’s start with what did not correlate with greater representation – some findings our analysts weren’t expecting, no less.

Our team originally assumed a community’s culture could impact a company’s culture – for example, those in the Silicon Valley (aka an area ripe for disruption) are perhaps more comfortable disrupting the male status quo than those in, say the deep Midwest (aka an area more homogeneous than most other parts of the US). However, across the four main regions of the United States (the Northeast, South, Midwest, and West), there were actually no significant variations.

2. The revenue factor is apparent.

4. A dent is being made across the industry.

“We are deliberate about diversity. We track it, we report it, we talk about it. If you’re out of compliance, you don’t just lose money – you lose your hiring privileges. That’s the most powerful motivator I have with my team.”

"You have to be intentional. It can’t just be about words, but actions. You can’t hand it off to a special committee or person alone. You have to make it part of every decision you make organizationally.”

“Having more diversity in our team is a source of strength to help us serve a very diverse patient population. We try to harness local, diverse leaders from our community to help us and educate us on issues of diversity – from hiring to being more accommodating. For example, I know when Ramadan and Yom Kippur is every year and it’s reflected in our scheduling.”

“There’s a corporate advantage to having a diverse team. If I don’t understand that business level, then it just becomes a diversity initiative that’s only about the numbers.”

What Organizations with Higher Percentages of Women Leaders Have in Common

We observed a willingness to challenge the status quo seemed to correlate with more women in senior leadership. Organizations with a higher representation of women in leadership typically have one or more of the following characteristics:

These three correlations could be indicative of a different mindset favoring more diverse C-suites – a mindset that’s driving innovative business decisions. Many senior female leaders we spoke with said risk-taking and playing the role of both challenger and problem solver was key to them making it to the top of their organizations. However, these correlations could also be indicative of a company culture that embraces change and diversity with gusto.

“More non-traditional organizations or innovators tend to create opportunities for women and embrace different points of views. They are more open to a ‘listen, learn, try, fail, change’ type of approach. That’s a space where women inherently thrive.”

“A number of people have a traditional male perspective of ‘everything will be okay if you stick to the program.’… But you want to create an agility culturally where people are encouraged to think big and take risks. You'll have to support them through that.”

How Our Findings Can Help More Women Reach C-Suite

Individual leaders making a commitment beyond just checking boxes is critical. These commitments can come in the form of: hiring inclusion and diversity leads, making themselves and their C-suites accountable, and rethinking succession planning and hiring processes.

We discuss strategies like these, and other ways to impact change in more depth in our research. But ultimately, the institutional characteristics and culture of your organization matter when it comes to diversity in healthcare C-suites. Yes, there are bright spots here and there. But our research shows the majority of industry players still lag in embracing and championing female leaders. We’ve seen organizations who stand out embrace disruption, offer more opportunities, and are consciously making changes – starting at the top.

We challenge those leaders with less diverse leadership teams to critically assess where diversity is on their priority lists and put it up higher. This is essential to avoid falling behind the competition and losing touch with consumers as the industry faces the next wave of disruptive change.

Subscribe
Females are Discontent but Darn Proactive About...
Infographic: Women In Healthcare Leadership
In a #MeToo World, How Healthy is Your...