Pharma Companies Struggle to Partner with Tech. They Need to Get Over It.

Key Takeaway
It’s when pharma companies step out of their comfort zones from the start that customers will reap benefits. #OWHealth
Share

Pharma has achieved remarkable breakthroughs in recent years – drugs that target cancers displaying particular genetic mutations, a new, long-awaited treatment for drug-resistant tuberculosis, and new gene therapies that fight disease by altering the instruction manual that tells the body how to operate, to name just a few. But there is much work still to do – and not all of it involves the next big scientific breakthrough.

Pills and injectables do things we might have thought impossible a few years ago. But they don’t work if patients don’t meet with their physicians, if physicians don’t prescribe them, and if patients don’t follow through and take their meds correctly. And there is much reason to think that they don’t. It’s estimated that only half of patients actually take drugs as directed, and that non-adherence to medication costs the United States $300 billion a year in lost productivity and the cost of treating patients after their disease has been allowed to grow more severe.

The Pharma Industry Operates Between a Rock and a Hard Place

There is plenty of room to improve patient outcomes across a wide range of conditions – and to earn new revenue from existing drugs. But to accomplish those goals, pharma companies need access to skills and market savvy that they’ve never needed to develop.

“No digital health offering has scaled like a medicine,” says Chris Hogg, chief commercial officer of Propeller Health, which has developed a sensor-and-app service for improving outcomes in respiratory disease. “Pharma is great at commercializing innovation,” he adds.

But pharma's success is limited. One reason? It's an industry  generally focused more on science than on, well, art. “Just having an efficacious drug is insufficient alone to get effective outcomes, because doctors practice the art of medicine when prescribing, and patients are unconstrained in how they take their medication," says Rachel Sha, vice president of digital business development and licensing at Sanofi. “Tech brings a very different skillset. Pharma doesn’t have the ‘build fast and iterate mindset,’” she adds. “To that end, Sanofi learned a lot from the startups.” Sanofi, she says, sees partnerships as a way to address the issue. They're exploring, for example, the specific idea of partnering with tech companies in multiple areas, including multi-channel engagement, precision marketing and e-commerce, digital therapeutics, and integrated care. They've already formed relationships with companies including Sema4, TriNetX, Evidation and Click Therapeutics.

Get Comfortable with Being Uncomfortable

It's not that tech thinks it has all the answers. But...pharma’s traditional strong points – meeting regulatory hurdles and conducting large-scale physician-oriented sales – have a built-in shortcoming.

The cultural differences between pharma and tech go a long way toward explaining the discouraging record of past collaborations between the two industries. Pharma partnerships are typically conducted from the wrong vantage point – from the finish line looking back to the starting line. Pharma companies tend to want to stick closely to a preconceived plan, learn and grow along the way while attempting to execute it,. It’s an approach to innovation that works well for drug development, but commercial innovation, especially innovation that aims to customize the user experience, requires a quicker, more iterative way of working.

Pharma probably can’t give up all of its goal-centeredness, but there are lessons companies can learn from startups, especially the way they're willing to experiment with their future commercial model. They trust to the market and refrain from making decisions until they need to – and until customers have had a chance to weigh in. It’s an uncomfortable model for pharma, but one that is likely to lead customers to innovative solutions.

It’s when pharma companies step out of their comfort zones from the start, make decisions step by step, and make changes to their plan in its initial development stages (with full team involvement) that customers will reap benefits. Migrating from partnership to co-development to aligned commercialization will break the cycle. 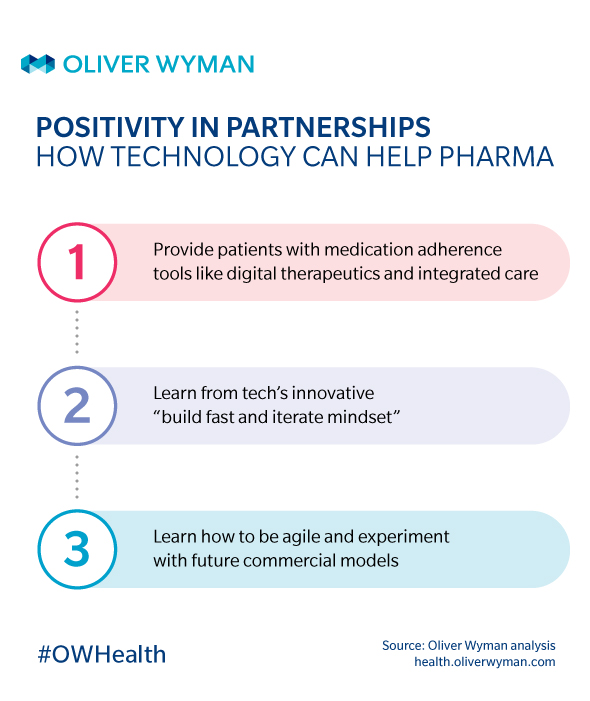 Subscribe
Podcast: Innovation is a Lifeline, Not a Buzzword
How Technology Changes People's Minds About...
Is Blockchain Ready to Unleash Innovation in...