Addressing Affordability in the ACA Market

Key Takeaway
The illness burden in the individual market is 23% higher than for the small group market. This cost falls primarily on individuals and families with incomes above 400% of FPL. #OWHealth
Share

In the US, we generally view medical care and health insurance as expensive. Imagine a family of four from Corpus Christi, Texas: two 50-year old adults (who are employed, but were not offered employer-coverage) and their two children. They have an annual household income of $100,651 – or 401 percent of the federal poverty level (FPL). What does this family do for health insurance? Well, if they wanted to purchase comprehensive major medical coverage, the lowest-cost silver plan available to them on the Exchange would cost $22,961 – nearly a quarter of their income – and the plan they would be purchasing would have a $5,200 per-person deductible (including a family deductible of $10,400). According to Oliver Wyman analysis, the lowest-cost silver plan in Corpus Christi is actually less than the median of lowest-cost silver plans available in the states using the federal Exchange.

The Very High Cost of Coverage, but Only for Some

At 150 percent of FPL, this family could obtain coverage for the lowest-cost silver plan for free due to premium subsidies and the difference between the lowest-cost and the second-lowest-cost plans. At 400 percent of FPL, their premium after subsidies would be $8,244. At 401 percent of FPL – the point at which a family is no longer eligible for premium subsidies – their premium would spike to $22,961. Of course, people with access to employer-sponsored coverage purchase that coverage with pre-tax income and therefore receive a subsidy equal to the income taxes are not required to pay on that income. 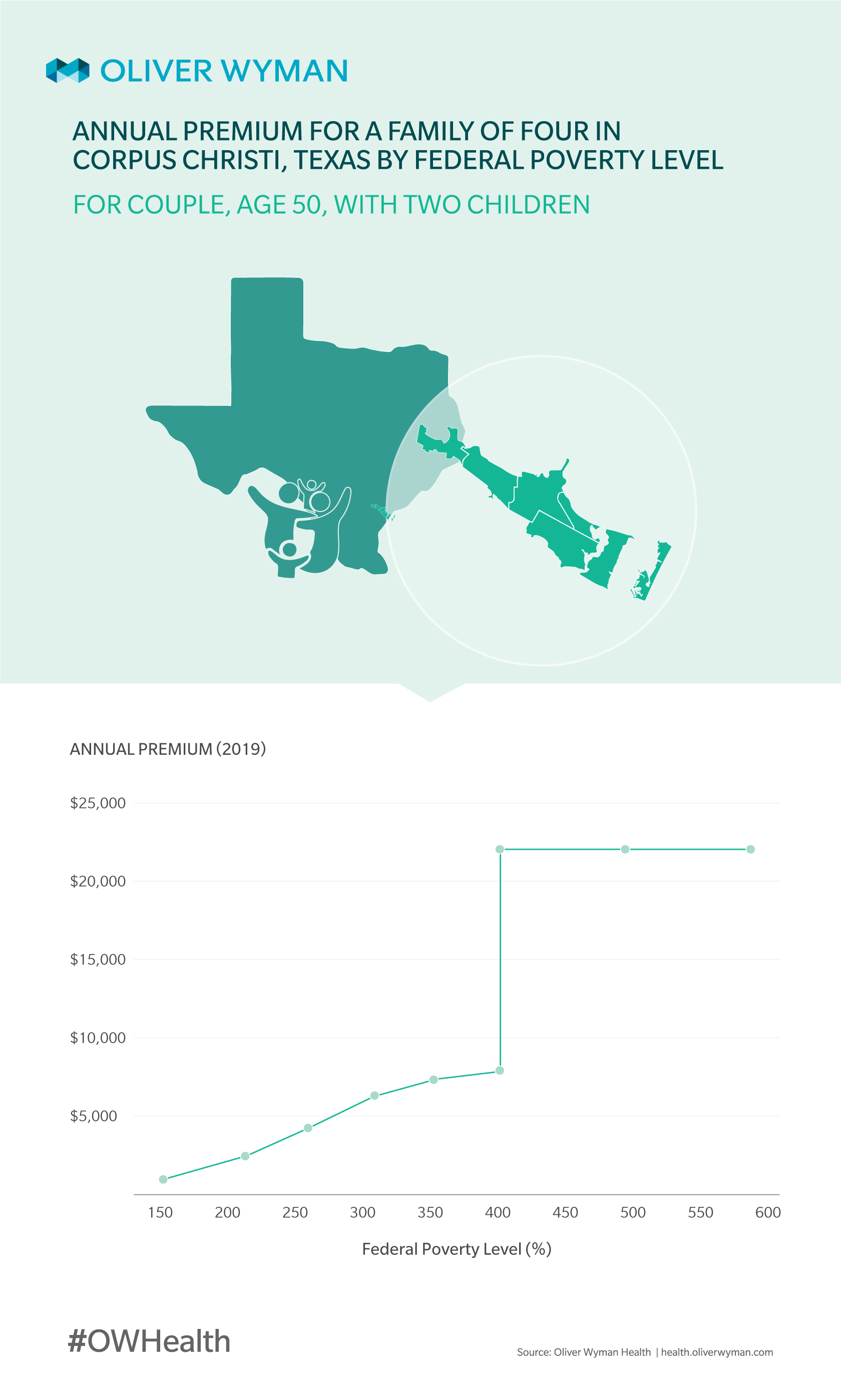 One of the reasons ACA market coverage is so expensive is also one of the law’s most popular provisions – anyone can enroll in coverage during the open enrollment period, regardless of their need for healthcare services. And, the premium rate they pay cannot reflect their expected need for healthcare services. The result of this guaranteed access? According to Oliver Wyman calculations, the illness burden in the individual market is roughly 23 percent higher than for the small group market. As we noted in a prior Oliver Wyman Health article several years back, this cost falls primarily on individuals and families with incomes above 400 percent of FPL. The premium subsidies largely protect those with lower incomes from this cost. Therefore, it’s no surprise individuals and families who don’t qualify for premium subsides have been leaving the market.

What Can be Done about Affordability? Here are Oliver Wyman’s Estimates

We used our microsimulation model to understand what could be accomplished using a federally funded, state managed reinsurance program with a $5 billion net cost in 2021. We estimate that such a program would reduce nationwide average premiums by almost 30 percent, and because coverage would be more affordable, it would draw another 2 million people into the market, almost all of whom would not be eligible for premium subsidies. Because this program would lower premiums for both the subsidy- and non-subsidy-eligible population by almost 30 percent, and because premium reductions for the subsidy-eligible population reduce federal outlays for premium subsidies, the size of the reinsurance program that could be provided for a net cost of $5 billion, is considerably larger than $5 billion. We estimate a federally funded reinsurance program using Section 1332 waiver authority could provide around $25 billion in reinsurance for a net cost of $5 billion, with the other $20 billion going to reduce federal outlays for premium subsidies.

A few caveats are in order here. Our modeling assumes the $5 billion is apportioned among states where premiums decrease by the same amount in every state. Insurers setting their premiums according to expectations of a reinsurance program’s effects may view the impact differently than we do. Although we have not modeled the impact of this $5 billion reinsurance program on the group market, we believe this program would not have material impact on that market. Finally, our model doesn’t anticipate major changes to the operation of the health insurance markets beyond the reinsurance program.