Key Takeaway
What if all the medicine we needed for optimal health was already there, in our kitchens? #OWHealth
Share

Editor's Note: This article was originally published in the 2018 Oliver Wyman Health Innovation Journal. Oliver Wyman’s Health & Life Sciences division is devoted to increasing industry-wide awareness of the “Food as Medicine” movement as part of our mission to drive nutrition’s holistic impact on health and well-being. We hope this interview sparks new conversations about how care decisions focused on the intersection of diet and medicine will dramatically drive healthier decisions and healthier lives.

Shivani Shah (SS): How significant is the malnutrition problem? What is its impact on the broader healthcare environment?

Alison L. Steiber (ALS): Let’s start with what malnutrition is, given that it’s often misunderstood. Malnutrition is largely about having an imbalanced intake in nutrition – either too much (obese) or too little (undernourished) – that then contributes to chronic diseases, acute diseases, and everyday illnesses and infections.

Within the United States, there’s an enormous problem with food insecurity – considered a major driver of malnutrition. Nearly 40 million people – an estimated 12.3 percent of American households – are food insecure, according to The 2017 Economic Research Report. This 12.3 percent increases to 17.3 percent when examining an elderly community-based population. The burden of malnutrition and food insecurity increases a person’s likelihood of mental health problems, diabetes, risk of hypertension and hyperlipidemia, and decreases key nutrients the body needs most, like iron, potassium, and calcium.

These figures, which represent a staggering number of individuals, are indicative of a system failing to prevent and treat malnutrition across many different environments, including our homes, schools, workplaces, and doctor’s offices.

ALS: It’s twofold. First, you need to be able to recognize it. Between one-third and one-half of hospitalized adults are malnourished, but only 7 percent are diagnosed with malnutrition. This gap is a major care quality issue. Next, you need to be able to treat it in real time. Up to 31 percent of malnourished patients, and even 38 percent of well-nourished patients, reportedly experience nutritional decline during their hospital stay. 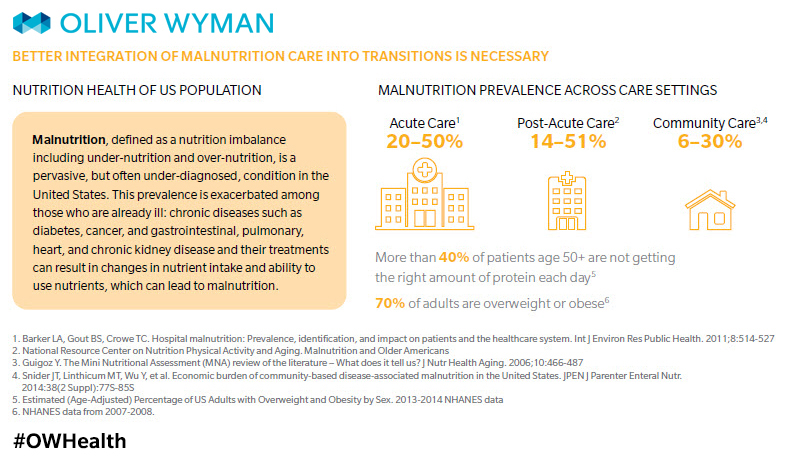 SS: What are the costs of malnutrition?

ALS: It is difficult to quantify tangible and intangible malnutrition costs, as costs range from decreased work productivity to increased healthcare costs when malnourished patients have extended hospital stays. In a hospital setting, costs are determined through diagnostic related group (DRG) codes. In a recent Academy study, malnutrition diagnoses were reported to increase when patients were properly diagnosed through a Nutrition Focused Physical Exam (NFPE) technique where registered dietitian nutritionists (RDNs) used a physical exam to determine the presence of malnutrition. The number of DRGs was assessed 12 months prior to the RDNs receiving NFPE training, and 12 months after. Malnutrition as a major comorbid condition nearly tripled after the training. This allowed these patients to be properly treated – avoiding sizable downstream costs. And, it meant the hospital was reimbursed for necessary care upstream.

SS: What barriers are there in treating malnutrition?

ALS: The first is a lack of awareness across many hospitals and clinics. Many healthcare professionals aren’t attuned to thinking about malnutrition. A second barrier is lack of quality training for practitioners in proper malnutrition screening and diagnosis. 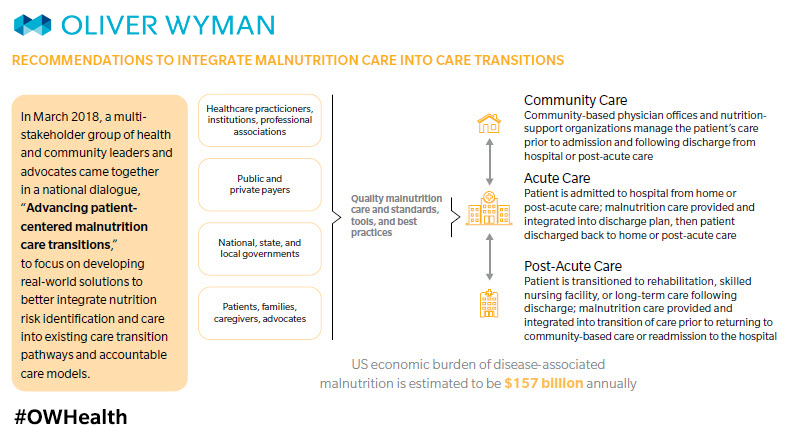 There isn't a simple procedure or biochemical test. Rather, it’s a time-consuming combination of physical, clinical, and dietary assessments to determine whether malnutrition exists. Adding to this problem? Hospital staff shortages. It is even more difficult to have trained staff and proper access to individuals at risk for malnutrition in clinics and community settings. Increased awareness, validated screening, and assessment tools are needed to ensure that malnutrition is being addressed, regardless of setting.

SS: What is the Academy of Nutrition and Dietetics doing to address malnutrition?

ALS: The Academy has many programs, resources, and research projects to address malnutrition, such as the previously mentioned NFPE training workshop, which provides handson training to increase knowledge and skills in the diagnosis of malnutrition for both pediatric and adult populations. The workshop, performed nationally, is now being conducted both domestically and globally.

A second major initiative the Academy has spearheaded is the development and testing of eMeasures (an electronic indicator of quality) for malnutrition in hospitals. The goal is to address malnutrition quality of care for hospitalized older adults by focusing on screening, assessment, diagnosis of malnutrition, and treatment care plans. For this project, we partnered with Avalere Health and Abbott Nutrition to launch the Malnutrition Quality Improvement Initiative (MQii) that provides hospitals with tools and processes to screen, diagnose, and treat malnutrition. Within the last four years, 56 unique facilities across 23 hospital systems have embraced MQii tools and resources. The Academy is also spearheading the submission of value sets (bundles) of electronically available terminology to be readily used in documenting malnutrition. Documentation is essential in assessing prevalence and addressing the problem. 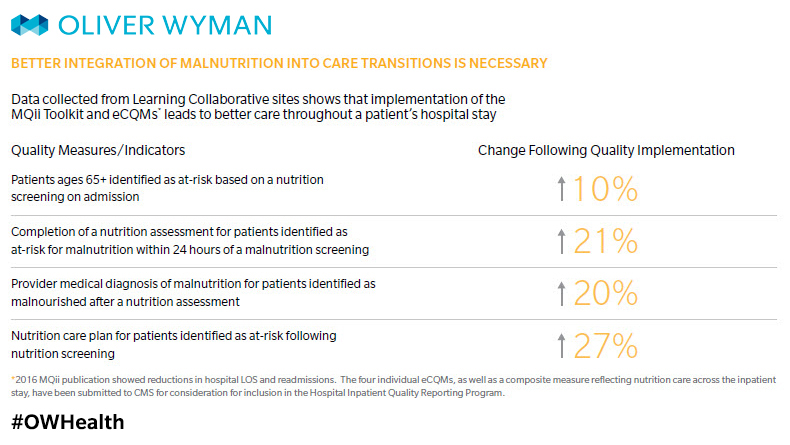 SS: What does “food as medicine” mean, especially as a way of addressing malnutrition?

ALS: Considering food as medicine is truly innovative. It raises nutrition to a higher community and health system level by having physicians and RDNs give patients food prescriptions. Patients who take seriously what their physicians say are likely to follow tangible directions. Imagine a physician writes a food prescription that includes consultation with a RDN, who then works with the patient, client, or consumer in places like the clinic and the grocery store to translate nutrient needs and preferences into food purchases that improve health.

SS: How do “food prescriptions” relate to MQii?

ALS: “Food as medicine” could incorporate the tools and resources for those patients either at risk or diagnosed with malnutrition. Healthcare providers in the community would use validated screening tools to determine people at risk for malnutrition. Those identified would receive a prescription for appropriate foods to address the malnutrition. This could be done across senior centers, food pantries, food banks, and outpatient clinics.

SS: What’s the most urgent next step in addressing malnutrition?

ALS: There is an urgent need for interoperability: seamlessly transferring valid, reliable malnutrition data throughout the healthcare system. Having the ecosystem invest in and adopt a comprehensive, long-term solution to the issue of interoperability in healthcare information related to the diagnosis and treatment of malnutrition would represent a significant step. The Academy has developed nutrition-focused standards available at HL7 (a major organization that set guidelines for how electronic health records could and should work) so that documented nutrition data will follow the patient wherever they go: from hospital to outpatient or long-term care facilities. The push for action at the public health level is urgent. The Academy has worked to pilot technology tools (Nutrition Care Process Terminology and an informatics web-based platform) in collaboration with food banks and other stakeholders to monitor and intervene against malnutrition and food insecurity.

Subscribe
Podcast: Walmart's Consumer Strategy
From Drug, to Cure: Pharma's Role in Emerging...
Beyond the Pills: When Value Meets Pharma