8 Million Nuclear Stress Tests are Performed in the US. Is This Necessary?

"My cardiologist recently said the only thing they could see was a slight abnormality in my heart – not anything serious. I had a nuclear stress test a year ago, and now he recommends another. Is this necessary? I read nuclear stress tests should not be given every year, so I feel like I should cancel it. I also have an electrocardiogram and another echocardiogram coming up.” – Mary Grace, 63, Florida

Mary Grace is not alone – every year, an estimated 8 million nuclear stress tests are performed in the United States.

Cardiac stress tests are ordered most often to assess whether symptoms like shortness of breath or chest discomfort are due to heart artery blockages. For patients who exercise with a normal electrocardiogram, a stress electrocardiogram or treadmill stress test may be all that is needed. This test largely involves monitoring of the electrocardiogram tracing during exercise. It is the lowest cost option among the various types of stress tests, no IV is needed, and there is no radiation exposure.

A nuclear stress test adds nuclear imaging to the basic stress electrocardiogram and is more likely to be used in patients with a prior heart attack, stenting, coronary artery bypass graft surgery, or those unable to exercise. The test requires an IV, involves injection of a radioactive tracer, and usually requires sitting under a camera that acquires images at rest and after stress.  For patients with appropriate indications, nuclear stress tests can be an important and helpful test. For others with less certain indications, nuclear stress tests can lead to unnecessary increased cost ($400-$750 for a nuclear stress test, $80-$275 for a stress echocardiogram, and $15-$70 for a stress electrocardiogram) and significant radiation exposure. And for those without concerning symptoms, routine surveillance stress testing is rarely indicated.

Nuclear stress test volumes have skyrocketed since the technology was introduced, more than doubling between 1995 and 2010. In fact, in 2010, 1 in every 200 patients at a non-emergency department office visit underwent a nuclear stress test.  Nuclear stress tests also involve significant radiation exposure (equivalent to 400 chest x-rays!) and may contribute to as many as 491 additional cancer cases annually. Based in part on this and equivalent diagnostic efficacy, it has been recommended preference be given to a stress electrocardiogram or stress echocardiogram in low-risk patients.

Unfortunately, current data suggests nuclear stress tests remain one of the most overused diagnostic procedures in medicine. Studies suggest over $100 million each year is spent on unnecessary nuclear stress tests. This has fueled both the Choosing Wisely campaign and the American Society of Nuclear Cardiology to boost efforts curbing nuclear stress testing overuse.

PracticingWisely® was developed in conjunction with Dr. Marty Makary of Johns Hopkins to uncover and address practice variation within areas of common overuse. Using claims data, rates of provider-level testing for a variety of measures can be easily assessed, with comparison of performance at the practice and national level. When such an analysis was performed for nuclear stress testing, notable variation was observed. Whereas roughly one quarter of physicians ordered nuclear stress tests less than 25 percent of the time, some 10 percent of physicians ordered them more than 75 percent of the time. 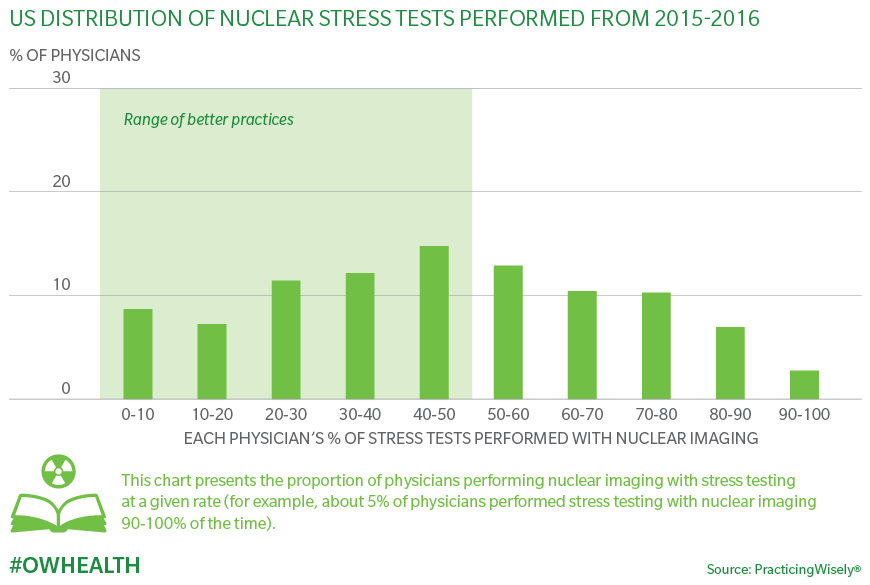 Leaders in quality improvement and appropriateness have long cited the need for potential limitations on self-referral (such as a physician ordering a study and performing it himself or herself) and feedback on one’s own practice pattern. In service to this, PracticingWisely® generates reports to partially allow a given provider to visualize their practice pattern relative to peers nationwide. It is common to hear from providers that they benefit from seeing their performance and how it may deviate from that of their peers.

While nuclear stress testing is an important imaging modality for many patients, its overuse is associated with significantly increased cost and exposure to radiation. As we shift to value-based reimbursement, PracticingWisely® allows providers to better understand their performance in a non-punitive way, ultimately aiming towards more clinically appropriate care.

We look forward to sharing more of our research and welcome questions, reactions, and ideas for new measures at PracticingWisely@OliverWyman.com.