Key Takeaway
There’s an interesting mirror between the UK and the States, with politicians in the US now leading more initiatives to end #braincancer. #OWHealth
Share

Just like that old pair of bell bottoms buried in the back corner of your closet, the healthcare system in the United Kingdom is rigidly stuck in the 1960s. But a new push from the government to radically digitize a system in dire need of a modern makeover is promoting consumer centricity and is making prevention a key care delivery focus. So say our guests on this episode of the Oliver Wyman Health Podcast. Tom Robinson, a San Francisco-based Partner in Oliver Wyman’s Health & Life Sciences division, chats with Crispin Ellison, a London-based Partner, also in Oliver Wyman’s Health & Life Sciences division, who works with the National Health Service (NHS) and the Prime Minister’s Office, to learn about a movement across the UK to shake up healthcare’s status quo. Together, they discuss innovation opportunities across the UK healthcare system for those in the United States. Crispin also shares his perspective on how to crack brain cancer.

Breaking Down the Current State of the UK Market

UK healthcare, a predominately public sector healthcare system where over 90 percent is paid for by the government, is generally free to all recipients with universal access at point-of-care. NHS England, an approximately $200 billion organization, runs the whole setup, Crispin says. But this model is not exactly the ideal monolith many from overseas perceive it as, he emphasizes. It’s actually quite segmented, fractured – and regionally young.

“NHS England is divided into 44 areas, each of which is responsible for an average population of about a million, and will be a cluster of hospitals, primary care providers, mental health providers, and social care providers,” Crispin explains. “Actual decision-making is on a regional basis.”

“The current health system in the UK, as with so many jurisdictions across the world, is in a state of crisis. It is unable to cope with rising demand and is under huge pressure,” he says.

There’s a dire need for UK healthcare to be more digital-enabled, personalized, and focused on prevention. One of the UK healthcare system’s greatest flaws, he says, is its lack of consumer-centricity.

“It’s still stuck in a 1960s model of reactive, provider-centric service, the like of which doesn’t really exist in other industries. Because it’s free to customers, customers can’t vote with their feet and go elsewhere, so there’s very little customer focus,” he explains.

The big difference between the UK and the US system is the proportion of Gross Domestic Product (GDP) committed to healthcare. For the UK system, the average cost per patient is around $2,500 USD – half the relative cost for the US system.

“There’s a recognition the UK health service is not going to be able to reform itself. For about ten years, we’ve been trying to reinvent the wheel – and not always a particularly round wheel comes out of that reinvention process. There’s a recognition at all senior levels we need to bring in ideas from elsewhere,” he says.

There is potentially monumental change beginning to happen to shatter the status quo of UK healthcare delivery. “The particular focus is how digitalization can be used as the vehicle to transform the service,” Crispin says.

One example is a greater push toward digitalization to make prevention, not just a diagnosis, a top priority to help put consumers back in the driver’s seat. As an example, Crispin and Tom reference a digital agenda from Matt Hancock, recently appointed Secretary of State for Health and Social Care, titled “The future of healthcare: our vision for digital, data and technology in health and care”, which was launched last October.

“Just being able to make the best use of mainstream products and services would transform health and social care in this country,” Hancock’s policy paper reads. “And appropriate use of NHS data could radically reduce the cost and time needed to generate new evidence on the effectiveness of interventions.”

“We have the opportunity to build an ecosystem that continually creates the best healthtech – technology that can be exported, alongside new methods and insights that can contribute to health outcomes globally. We are committed to working with partners to make that happen,” Hancock’s agenda states.

“Matt Hancock has come with a very strong digital agenda about what he wants to do,” summarizes Crispin.

Crispin also points out the Prime Minister, advocating an innovative mindset to be widely adopted, has allocated a significant switch-up in funding.

“The NHS is getting together an additional $20 billion a year – a 5 or 6 percent jump in funding,” he notes. “Therefore, for the first time, there is potential to have the seed funding necessary to drive transformation.” 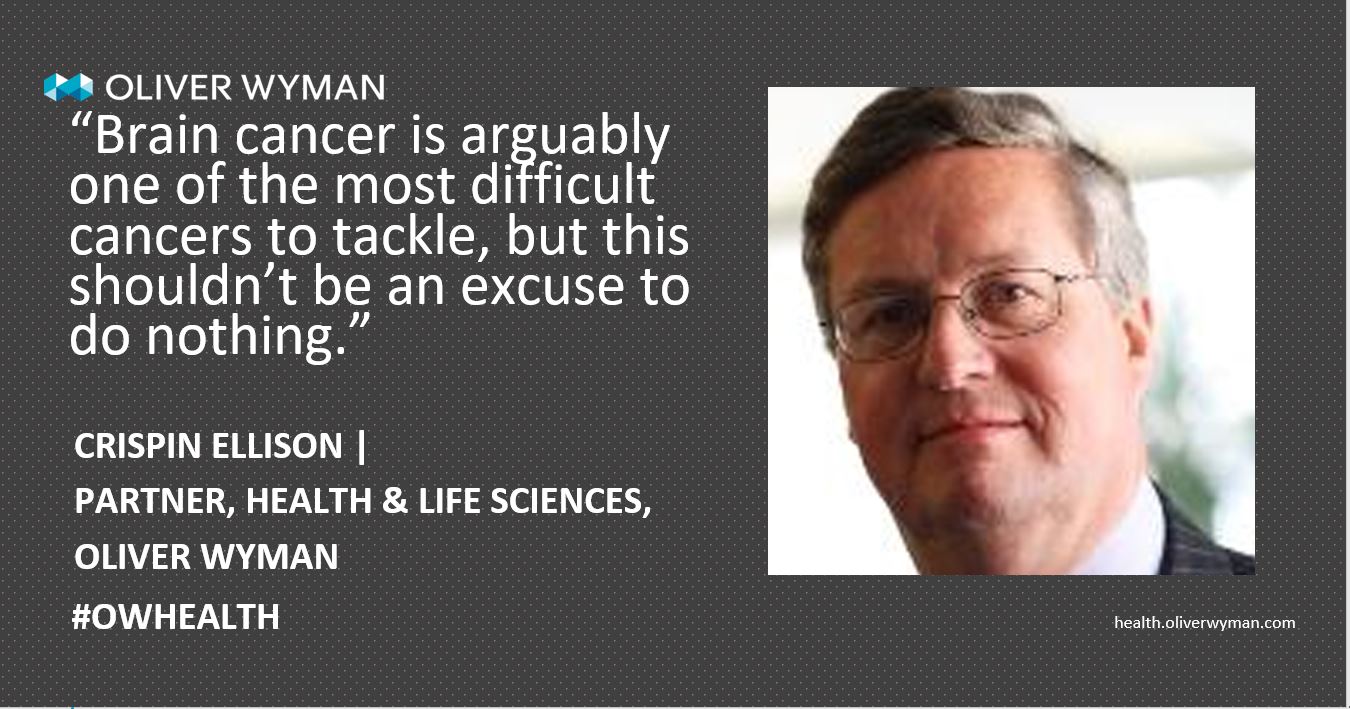 Brain cancer is an area that’s seen no real breakthroughs over the past 40 years, due to the complexity of the condition and the small populations of patients affected by brain cancer, says Crispin.

“This was very much brought to a head in the UK when former Cabinet Minister and senior politician, Tessa Jowell, contracted brain cancer and made a very emotional speech in the House of Lords about her condition,” he explains.

“Less than two percent of cancer research funding is spent on brain tumors, and no new vital drugs have been developed in the last 50 years,” said Tessa during this speech. “In the end, what gives a life meaning is not only how it is lived, but how it draws to a close. I hope this debate will give hope to other cancer patients like me so that we can live well together with cancer, not just dying of it.”

“Brain cancer is arguably one of the most difficult cancers to tackle, but this shouldn’t be an excuse to do nothing,” says Crispin. “She launched a movement.”

This movement is supported across political divides across the UK. For example, all key stakeholders have now come together to try and build a program and make real progress in this area.

“One of the challenges is brain cancer has a smaller population. This therefore needs to be internationalized so we can share data on brain cancer, and indeed when you want to trial someone and find an appropriate patient, this will have to be an international movement,” he says.

There’s an interesting mirror between the UK and the States, with politicians in the US now leading more initiatives to end brain cancer, says Crispin. For example, there’s the Biden Cancer Initiative, launched by former Vice President Joe Biden and his wife, Dr. Jill Biden, whose son died from brain cancer. Brain cancer was also thrust into the spotlight when former US Senator John McCain passed away earlier this year after deciding to end his brain cancer treatment.

Regarding this pace of future progress and the spark he’s seeing being ignited recently, Crispin says it’s now a question of focusing collectively on different research areas.

“One of the key things in the UK we’re looking to develop is adaptive trials so when a patient who has a treatment that doesn’t work, they then move on and try another treatment. We don’t have the protocols or data for that, but we’re looking to pilot this approach from the beginning of 2019,” he explains. “We’ve already got some significant progress – we’ve attracted $80 million of investment in three months. It’s now a question of pulling this all together in a program."

The goal is to ensure research isn’t conducted in isolated pockets, but via a global community where data, ideas, and even patients remain connected. The main challenge is this is potentially a five- or ten-year journey.

“We need to globalize and stop doing things on a national basis. The populations won’t support the economics without bigger scale,” he emphasizes.

For more on Crispin’s predictions, check out the Oliver Wyman Health Podcast page, featuring executive conversations on the business of transforming healthcare.

Subscribe
Leading from the Front Lines: Advice from a...
Podcast: The Medicare Advantage ... Advantage
Q&A: Amazon Web Services and AXA on Asia Health...