Key Takeaway
@AneeshChopra: "What we now need is a new model of organizing and using health information safely and securely to ensure it works in the best interests of patients we love and serve." #OWHIC
Share

Today was the third and final day of this year's Oliver Wyman Health Innovation Summit (#OWHIC) here in Dallas, where 350 C-suite executives, leaders, and influencers convened to discuss the future state of the industry. Here's a brief summary of some of Wednesday's biggest breakthroughs and takeaways.

The morning began with a mainstage session from Aneesh Chopra, President of CareJourney and the former (and very first) US Chief Technology Officer. His address sparked debate and dialogue across the venue. Aneesh said although data has incredible and actionable potential, realizing this potential is an entirely different story. The industry must focus its efforts on achieving what he called true data liberation so healthcare information is available easily for all. Fluid data accessibility, he explained, will spark incredible innovation that may end up completely redefining the status quo for care delivery. And it can be done with the tools and standards already available.

"Apple is a tougher enforcement cop on standards than the government," he said.

"Software doesn’t care if it’s an app to pull your records for risk adjustment decision support, or to do what you want on Facebook as a consumer. It's simply 'machine 1' talking to 'machine 2' with a handshake authorized with a digital secure token. That's it!" he said.

"What we now need is a new model of organizing and using health information safely and securely to ensure it works in the best interests of patients we love and serve," he concluded. 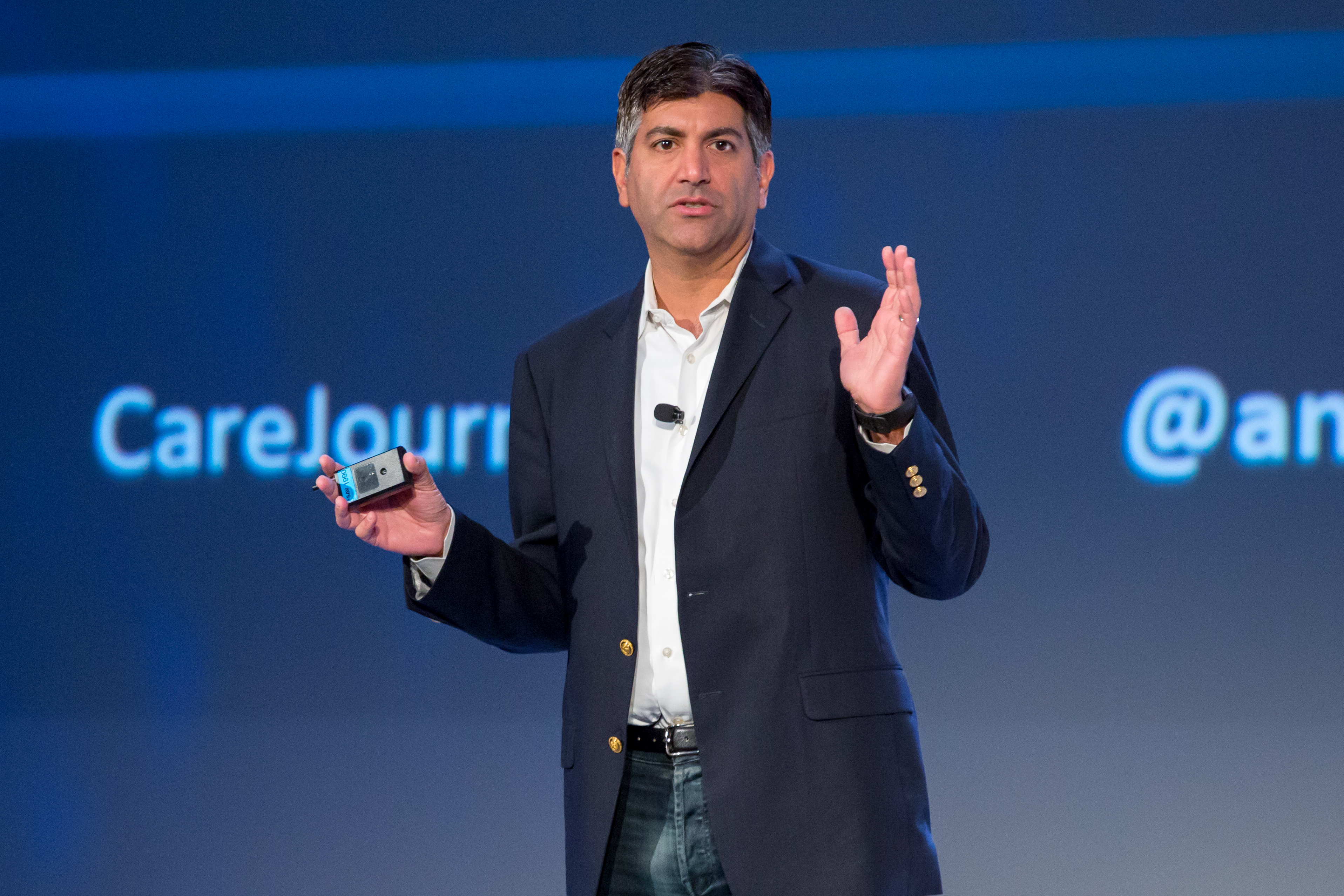 Next up, Patrick J. Kennedy, former US Representative (D-RI) who founded The Kennedy Forum, joined Thomas R. Insel, MD, Co-founder & President of Mindstrong Health, and Linda Rosenberg, the National Council for Behavioral Health’s President and Chief Executive Officer, for a passionate conversation on the nation’s mental health epidemic. With mental illness reportedly present in nearly one in five US adults, and with an estimated one in eight Americans age twelve and older on a daily antidepressant, there's a great need to treat mental health not as a cost issue, but merely as a health issue, emphasized the panelists. Operating two different health systems (one for the body and another for the mind) is an inferior and ineffective approach to considering mental health as merely health.

"Mental health is the topic we tend to experience, but not talk about," said Tom. Seventy percent of people with a mental illness have the disease by age 25. Tom said that young people prefer to manage their mental health online. "There’s less stigma, there’s greater convenience, and it can be customized. This is a wonderful opportunity to scale," he said.

Mental health issues affect a large portion of the population. "Half the audience here probably has some kind of antidepressant they’re taking," said Linda. The state of the industry, she said, has not caught up yet to meet consumers where they are. Things that currently exist are slower to change than things that are brand new, she said. The good news is that demand for virtual means of care delivery is very strong.

"Telehealth companies who focus on psychiatry have more people who want to work for them than they have business," she said. "Regulation always follows innovation."

Patrick began by talking about his parental upbringing. "My father [Ted Kennedy] had incredibly emotional trauma that affected him for the rest of his life. At that time, we didn’t know what post-traumatic stress was," Patrick began.

Mental health became a passion of Patrick's as a government leader and something he tirelessly sought to advocate for. But early on in his career, Patrick said no one else wanted to be the sponsor of a bill that had the words "mental health" or "addiction" in it.

So many health status issues are not medical, but are social determinants, he said. One of the main problems is that there isn't a payer or even a state in this country close to closing the gap where care access between addiction and cardiovascular disease is considered separately, he said.

"We could get those partnerships between the state, county governments, and federal where the government could make a difference," he said. But payers never see what the government does, and vice versa, he added.

"The first thing we need is to put some teeth and public pressure behind the law so insurance companies have to build out access. They're just not paying for it. They think they can get away with it, because no one's going to give them any political pressure. We need to build a counter movement behind parity," he advised.

LaVone said that although her company's merger back in 2013 where two organizations, both with over 100 years of experiences serving the citizens of Texas, was a wonderful opportunity, geographical challenges prevailed. She then discussed the tactics and strategies behind bringing different organizations together as one.

"You have to know the visions, goals, and values of a new organization upfront. This becomes your North Star," she said. "It’s important to ask the hard questions and get the hard answers early."

"There will be those within and outside the organization that have your back. There are some that will sit back and wait and see, the neutral ones. There are others who don’t want you to succeed," she explained of the merger process.

“The greatest opportunity we have is to improve the experience of our customers,” she said. “The healthcare system was built around the convenience of the providers, and that has to change.”

"One of the challenges we have in healthcare is we’re selling something no one wants to need," said Niyum.

Brigitte emphasized the importance of listening to the consumer. "Once you start to listen, you think of new solutions," she said.

Sam Glick, Partner in Oliver Wyman's Health & Life Sciences division, who moderated this chat, asked Brigitte what Aetna's greatest threat was. "Our own organization is threatened by our business model," she responded.

Reena expressed excitement during this session for mental health's ongoing buzz at the Summit. “I’m thrilled mental health made it to the main stage. Five years ago, no one was talking about it,” she emphasized. “There’s fifty years of evidence this stuff works. The key is getting it into the hand of patients.” 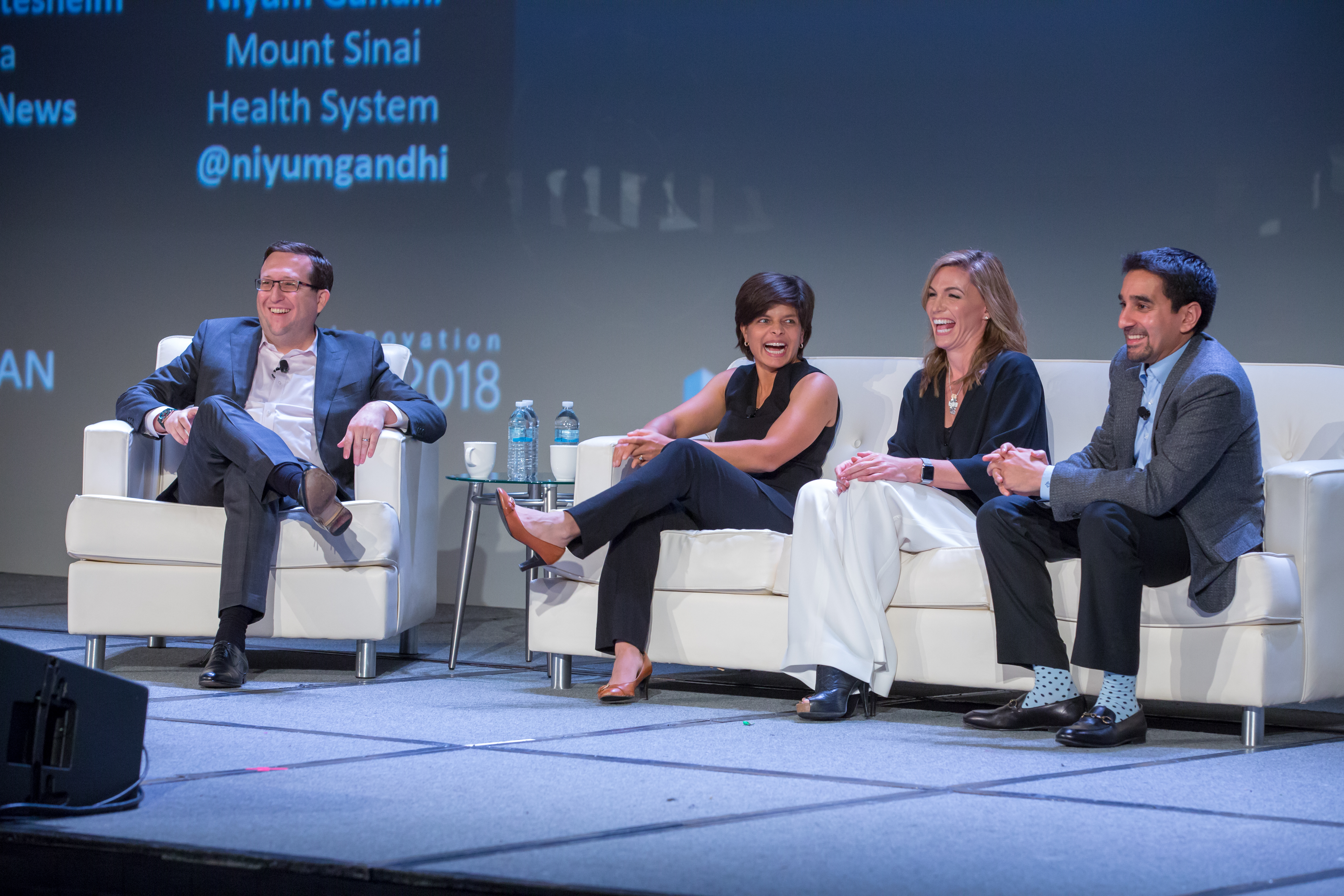 For more information now that the event has ended, check out The Oliver Wyman Health Podcast, featuring exclusive, in-depth conversations with some of this year's keynote speakers on their greater industry perspectives, predictions, and visions for what's next. And stay tuned for more recaps of the event in coming weeks.