The Hospital of the Future, Part 1: Nine Market Pressure Points for Health Systems

Editor’s Note: This article is the first in a three-part “Hospital of the Future” series. In Part 1, we explore the top strategic pursuits that the vast majority of health systems are advancing today. In Part 2, we shine a light on bolder examples of innovation that bridge to new services and operating models. And in the Final Part, we explore bigger systemic shifts in the role of hospital system in the context of macro market disruption.

Hospital-based health systems – regardless of size and geography – are experiencing incredible, unrelenting performance pressure. For most, margins are tenuous due to reimbursement compression, challenging cross-subsidization dynamics, and declining inpatient utilization. Historical profit zones largely reside in undifferentiated services like imaging and routine procedures. New, more agile competitors are vying for patient relationships – particularly around the front end of care delivery. Networks are narrowing, and payers are pushing for rate concessions or risk-based contracts. The regulatory climate remains murky. And workforce burnout at multiple levels is a legitimate concern.

Against this difficult backdrop, hospitals systems are seeking sustainability, growth, and relevance with a broad set of actors – employers, payers, clinicians, and ultimately consumers. So, what are they doing about this, and are the near-term actions that they are taking commensurate with the scale of the challenge? Over the past year, Oliver Wyman conducted conversations with the leadership teams of over 30 large hospital systems (exceeding $1.5 billion in revenue) to understand their strategic agenda. Interestingly, the vast majority of these organizations are pursuing the same nine strategic initiatives. 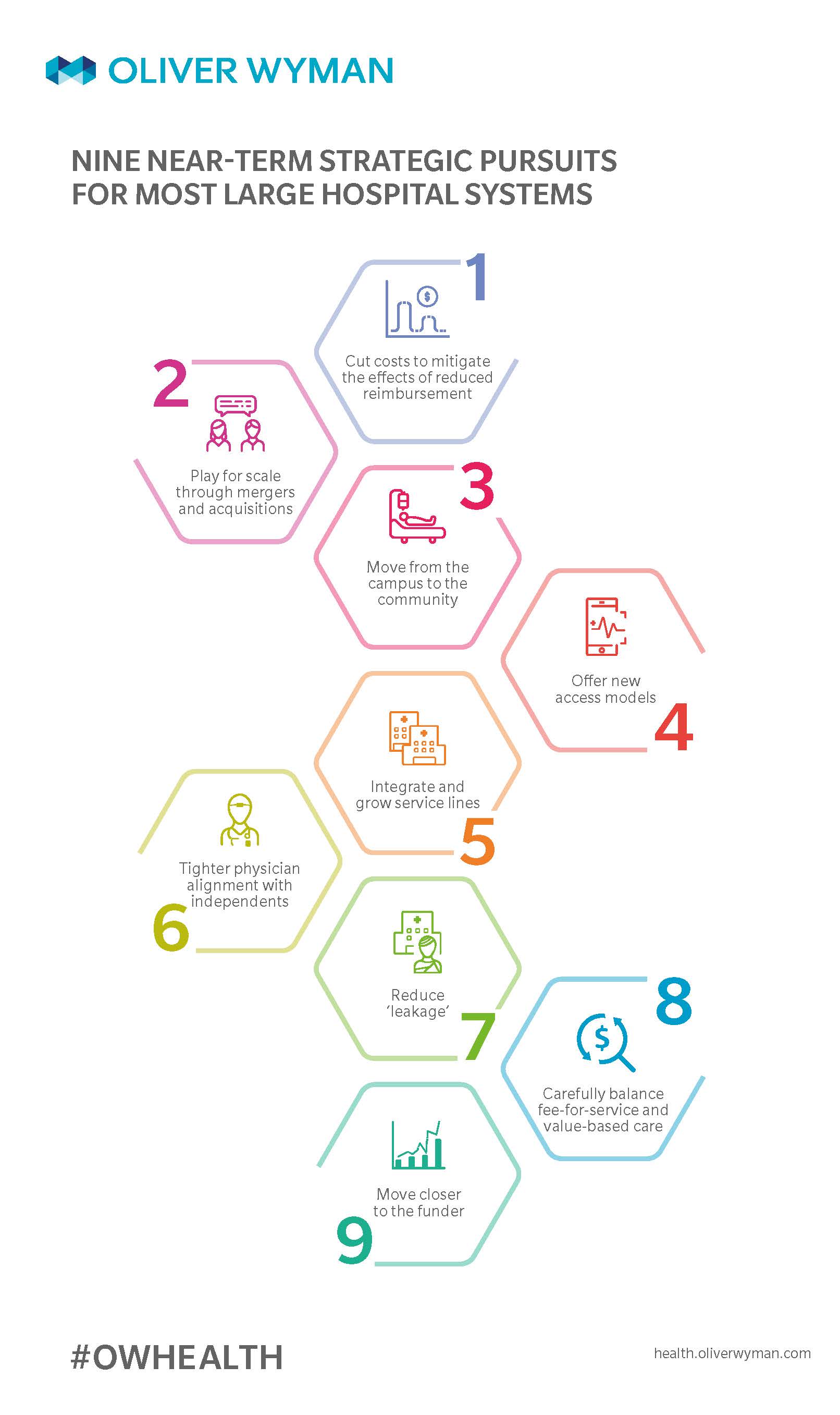 1.  Cut costs to mitigate the effects of reduced reimbursement:

For decades, hospital systems enjoyed escalating reimbursement rates that allowed them to thrive even as their costs increased. However, top-line growth is stalling for most systems due to flattening reimbursement rates, payer mix and site of service shifts, and intensifying competition. As a result, the biggest priority for most systems is to rein in costs. Providers have started addressing low hanging fruit by tightly managing supply and targeted labor costs. This type of cost takeout initiative can produce roughly a one-time five to seven percent savings, but ongoing demands from legacy operating models, such as hiring, often negates these effects. Most systems have avoided transformational cost restructuring that can yield upwards of a 15 to 20 percent savings impact and slowing cost trend. This requires changes in what services they provide, to whom, and where – as well as substantial reengineering of the underlying clinical model. The result is that for most not-for-profit systems, expense growth is outpacing revenue growth.

2. Play for scale through mergers and acquisitions:

Many health systems believe becoming larger is a necessary step on the path to sustainability. The primary vessel for achieving greater scale has come through inorganic combinations. The average pace of mergers and acquisitions (M&A) activity has almost doubled in recent years, compared with the aughts. 2018 continues the trend – despite the close eye of the Federal Trade Commission – with the most recent announcement coming just this week from Texas. M&A proponents believe scaling up will strengthen a system’s negotiating position with payers, drive down operating and investment costs, provide access to capital, improve credit ratings, and add capabilities. Yet, recent analysis shows no correlation between size and margin performance.

3. From the campus to the community:

Clinical advancements, consumer preferences, and economic forces are driving volume from traditional acute inpatient care to outpatient care. Health systems are redesigning their new points of supply around ambulatory care offerings, focusing expansion plans on physician offices and procedural suites, rather than beds. Some systems are moving their services into the community with ‘one-stop-shop’ ambulatory centers, including clinical services that were once only performed in acute care facilities. These include diagnostic testing such as imaging, specialty procedures in GI or cath labs, infusion centers, a growing menu of outpatient surgeries and emergency departments not connected to an acute care facility. As they push care outside of the hospital campus, systems also need to decide if they would maintain their outpatient rates (HOPD) or accept lower reimbursement for services performed away from the campus. Ultimately though, most are keeping their outpatient services on campus, missing the bigger opportunity to bring care to consumers where they live and work. And those that are building ambulatory outposts tend to aggregate disparate services under one roof versus redesign the experience itself.

Patients who need low-acuity care no longer need to confine themselves to a primary care office during working hours. A range of urgent, retail, and virtual care is now widely available. According to Oliver Wyman analysis, over $200 billion in healthcare spend is expected to migrate from traditional venues to new front door sites. As a result, hospital systems are threatened with losing their primary source of new patients. Systems are therefore racing to grab every street corner and saturate their markets with access points. Urgent care in particular has snowballed nationally – currently an $18 billion industry that experienced a 1,725 percent volume increase in privately insured patients between 2007 and 2016. This is seven times the volume growth of emergency room visits during that time, according to FAIR Health. However, these services remain largely transactional in nature, and are often disconnected from the rest of the health system.

Hospital systems nationwide are doubling down on efforts to differentiate and grow key clinical domains by developing ‘centers of excellence’ (CoEs) or ‘institutes.’ Most have focused on the same four key (largely profitable) areas: oncology, orthopedics, cardiology, and neurology – with the goal of not just winning share but also expanding the addressable market geographically. Academic medical centers initiated the first wave of CoEs combining their tripartite mission of clinical care, research, and academics. However, many regional hospital systems have adopted the integrated service line construct as well – with an emphasis on co-locating the full spectrum of care, operating a unified organizational structure, hiring patient navigators, and working to make the patient experience seamless and integrated. Only select hospital systems have advanced broader redesign efforts to tailor the care model and experience around the patient’s needs and journey in a holistic, longitudinal manner. Cancer care has been the leading example here.

In the 2000s and first half of the 2010s, there was a significant spike in physician acquisitions by hospital systems – especially primary care and profitable specialties. Amassing ‘attributed lives’ with the ability to influence their care patterns became a major rallying cry – whether to serve as a funnel for the downstream hospital engine, or from a value-based care perspective. As of 2016, hospitals employed a reported 42 percent of physicians and 29 percent of physician practices. However, in recent years, we have seen a shift from hospitals buying physicians to tightly aligning them with their systems. This pattern has been driven by a thinning supply of ‘attractive’ acquisition targets coupled with significant acquisition costs. Most have established clinically integrated networks (CINs) toward this end, but other alignment vehicles are emerging (such as co-management deals to build joint ambulatory surgery centers). Expect even more activity on this front over the next three to five years – both with primary care and specialists.

Under the prevailing preferred provider organization (PPO) network model, a typical hospital system will see its patients receive more than half of their care from other provider organizations. Preventing this ‘leakage’ is a major concern for systems – especially those operating in markets with stagnant population growth where new lives are hard to come by. These efforts are also critical for organizations participating in value-based contracts. We have observed ‘best-in-class’ organizations driving leakage down to nearly 30 percent through a combination of efforts – redesigning referral management processes, pursuing continuity of care efforts across the full continuum (such as into post-acute), and becoming more consumer-friendly. Our experience shows that there is an upper-bound in what systems can achieve when addressing leakage – efforts yielding more than a 10 percent absolute improvement are rare.

Nearly all large hospital systems nationwide now have part of their revenue streams tied to value-based payment. Most executives recognize this is important to their long-term future. However, most efforts have focused on optimizing pay-for-performance, upside only, or very light risk arrangements. While there are visible examples of providers taking risk in support of moving toward value-based care, most hospital system executives are reticent to embrace downside risk. Many are waiting for a ‘tipping point’ that remains elusive. They have had a difficult time proving a return on investment (and disruption) – especially for commercial lives. And many are skittish because of the government’s fluctuating position on value-based programs. With that said, those hospital executives that we engaged with view Medicare Advantage as a low / no regret area to move toward with greater speed and conviction.

9. Move closer to the funder:

In a world still largely governed by broad, open networks (PPOs), hospital systems are looking to create greater adoption and loyalty. With limited growth prospects, going directly to the funding source has been a core vehicle – through deeper payer partnerships (as tracked by Oliver Wyman) and in some instances going direct to the employers themselves (often with the payer acting as a third party administrator). Through partnering, systems expect improved access to patients, either through benefits and network designs or through active steerage. Hospital executives appear to be shying away from a stance of crossing the bright line to ‘become the payer’ – with an increased recognition of the complexity and risk of the payer’s value chain. Expect the upward trend of hospital system-payer partnerships to continue.

These nine priority areas are consuming incredible time and attention for most hospital systems. The question is whether they are sufficient, especially since most systems are competing using the same tactics – with a fixed (or shrinking) pie to work from.

Stay tuned for our next article in this series on Oliver Wyman Health, which will analyze some innovations that can help healthcare systems thrive long-term.

Subscribe
Three Healthcare Trends to Watch
Outlook on Climate Change as a Healthcare Crisis
What’s in the Medicare Advantage Stars for 2021?