The Potential Impact of Changes to the Risk Adjustment Program 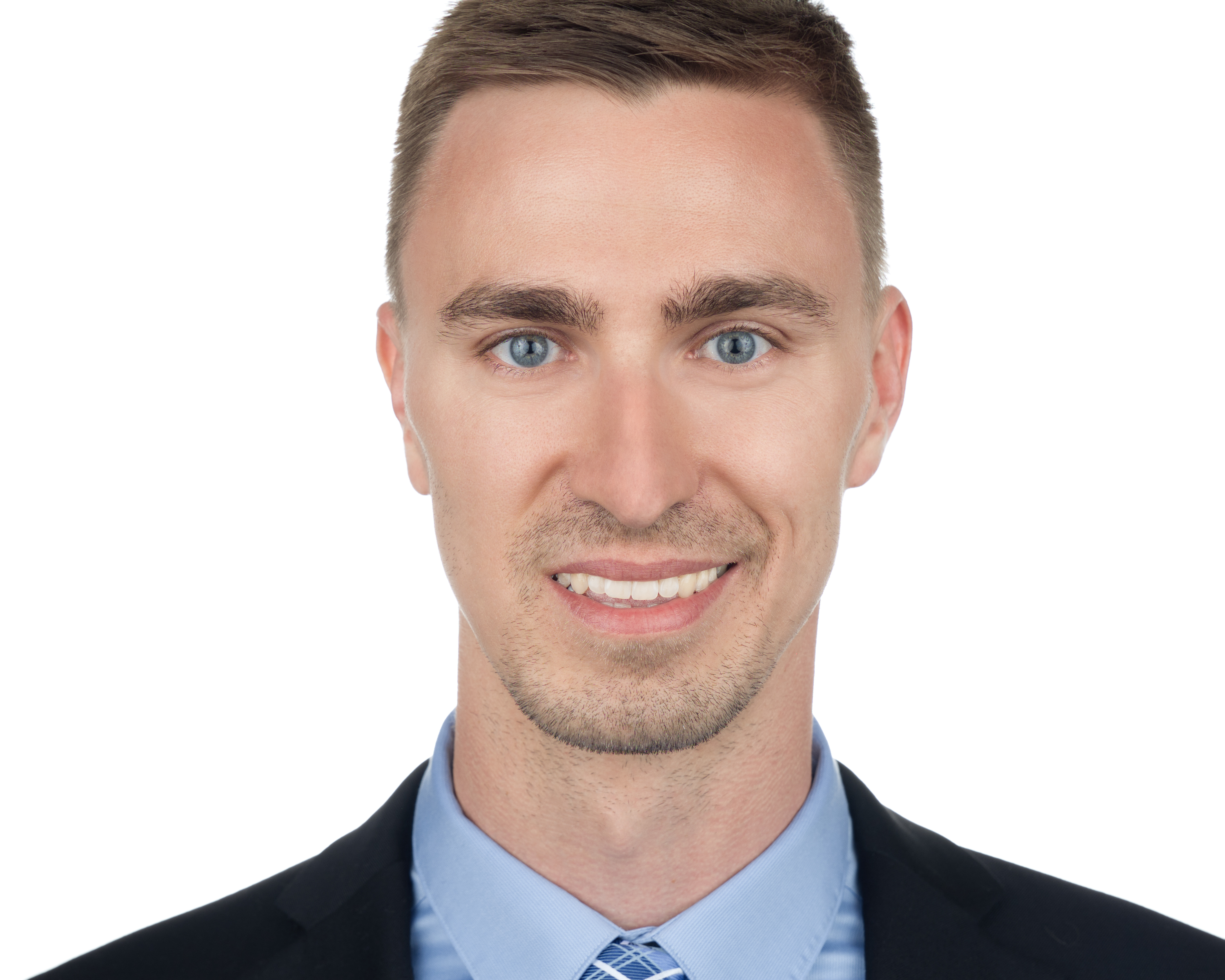 The Administration announced on July 7th it would suspend collections and payments under the risk adjustment program for the 2017 benefit year. The Centers for Medicare and Medicaid Services (CMS) indicated this action was the result of a ruling issued in the United States District Court for the District of New Mexico on February 28, 2018, ordering CMS vacate the use of the statewide average premium in the risk adjustment transfer formula for the 2014 to 2018 benefit years.

On July 30, 2018, CMS issued a final rule related to its risk adjustment methodology for the 2017 plan year, and indicated this rule would allow them to proceed with assessing charges and making payments for that plan year, as announced in a report released on July 9, 2018. Subsequently on August 8, 2018 CMS issued a proposed rule outlining their proposal to use the statewide average premium in the risk adjustment transfer formula for the 2018 plan year, and are currently seeking public comment.

Given the court case and the public comment period, we thought it might be instructive to evaluate what could happen if each carrier’s charge or payment were recalculated by replacing the statewide average premium with the carrier’s own average premium for the market in each state, while leaving all other aspects of the formula unchanged. As noted in the final rule, this would have required a balancing item by increasing charges, reducing payments, or splitting the difference between charges and payments, since the ACA did authorize and funds were not appropriated to pay any shortfall between calculated payments and charges.

To examine the potential financial impact this type of change in methodology could have, we utilized 2016 financial experience at the carrier level for the individual market within each state, and recalculated the transfer amount for each carrier by substituting the carrier’s average premium for the statewide average premium. (We excluded Vermont and Massachusetts, which have merged individual and small group markets for purposes of risk adjustment, and eight other states for which we could not reconcile our various data sources within a reasonable tolerance.) After these exclusions, our analysis included roughly 90 percent of nationwide membership in the individual market. 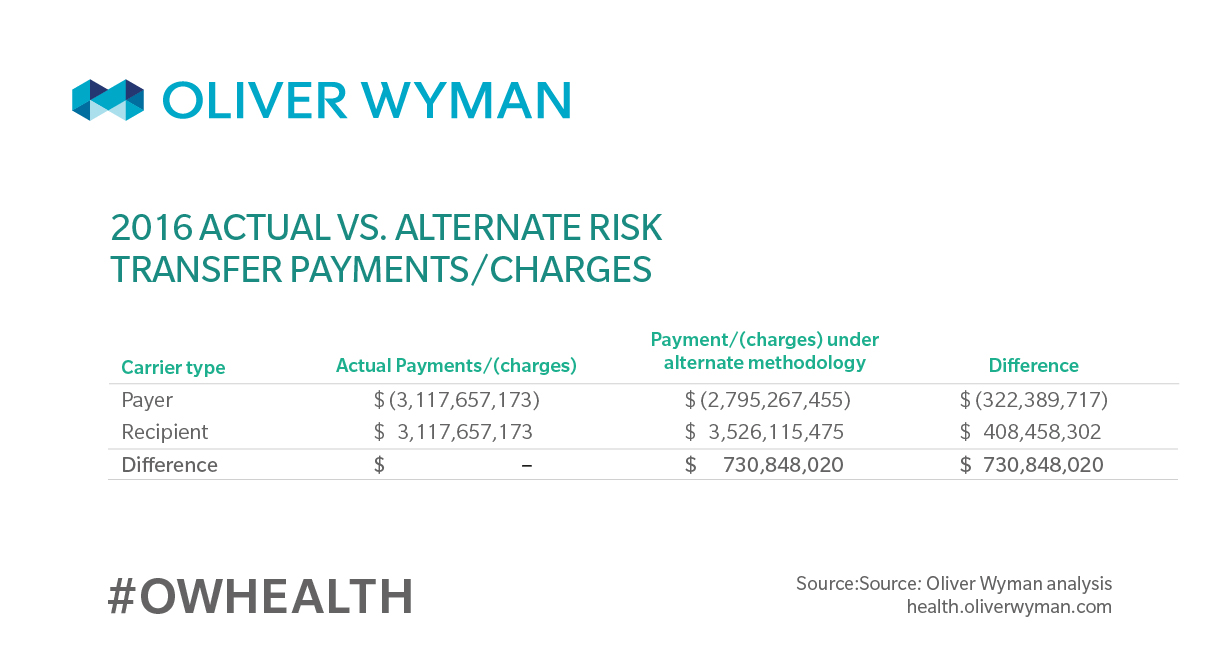 Even if risk adjustment payments were not required to equal risk adjustment charges by law, the unfunded shortfall would require appropriations at either the state or federal level. In our estimation, this would be unlikely. Based on the 2016 modeling, the appropriations would likely need to be greater than $731 million, as our analysis does not include ten states or the small group market.

As shown in Table 4 (at the end of this article), the impact of these alternate methodologies would vary by state, ranging from no impact in Wyoming and South Carolina to significant changes in the District of Columbia. On average, across all states we examined, the impact on charges and payments to carriers is estimated to be roughly 1 percent of premium under Alternative 1 and slightly higher under Alternative 2. 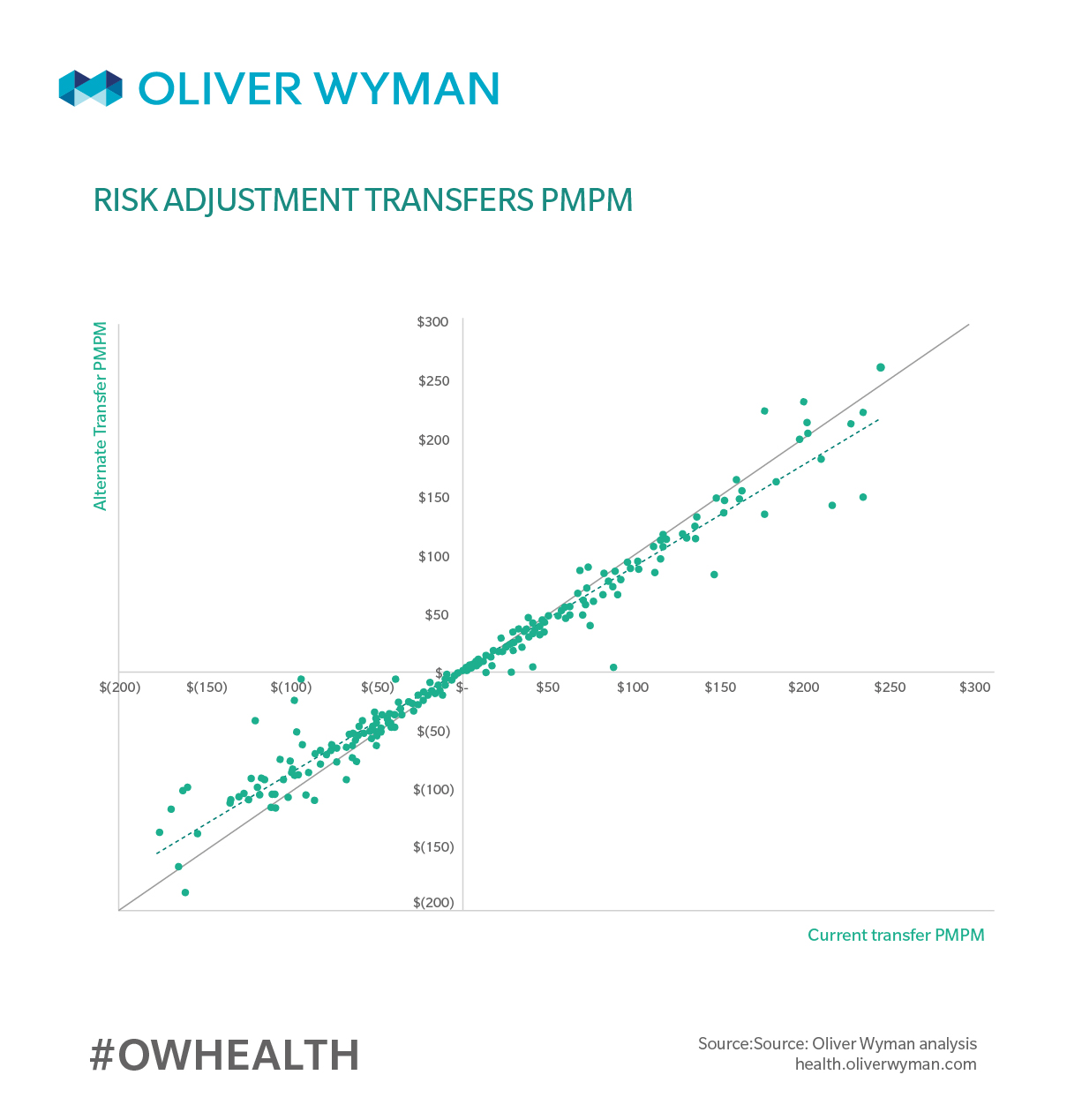 Finally, we examined the results by carrier size within a state. As Table 3 shows, the alternate risk transfer methodologies would generally have a greater percentage impact on smaller carriers than it would for larger carriers. Among the smaller carriers, those that received payments from the risk transfer program for 2016 would have a greater shortfall under the Alternative 1, but receive substantially more under Alternative 2. 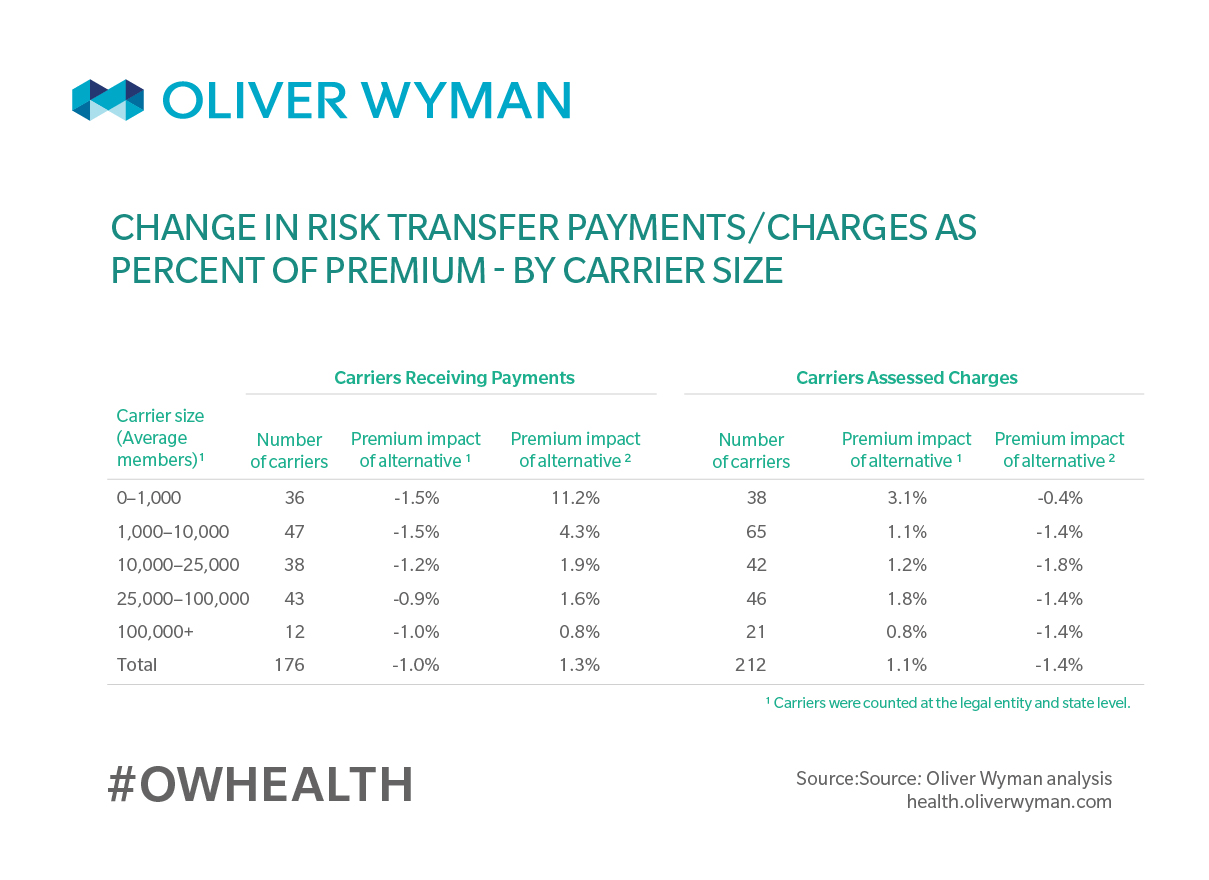 The estimated impact of the alternate methodologies examined would vary by state and by carrier. Generally, carriers that are assessed charges under the risk adjustment program today would be expected to be charged less under Alternative 1, and charged more under Alternative 2, while carriers that receive payments from the risk adjustment program would be expected to receive less under Alternative 1, and receive more under Alternative 2. On average, the change in risk transfer amounts under the alternatives would not have dramatic financial ramifications for the market as a whole, at least for 2016, but analysis shows the financial implications are greater for carriers with fewer members. The PMPM difference for some outlier carriers can be dramatic. Further financial pressure on some of the smaller carriers could increase their risk of insolvency or withdrawal from the market, further affecting enrollees in the individual market. 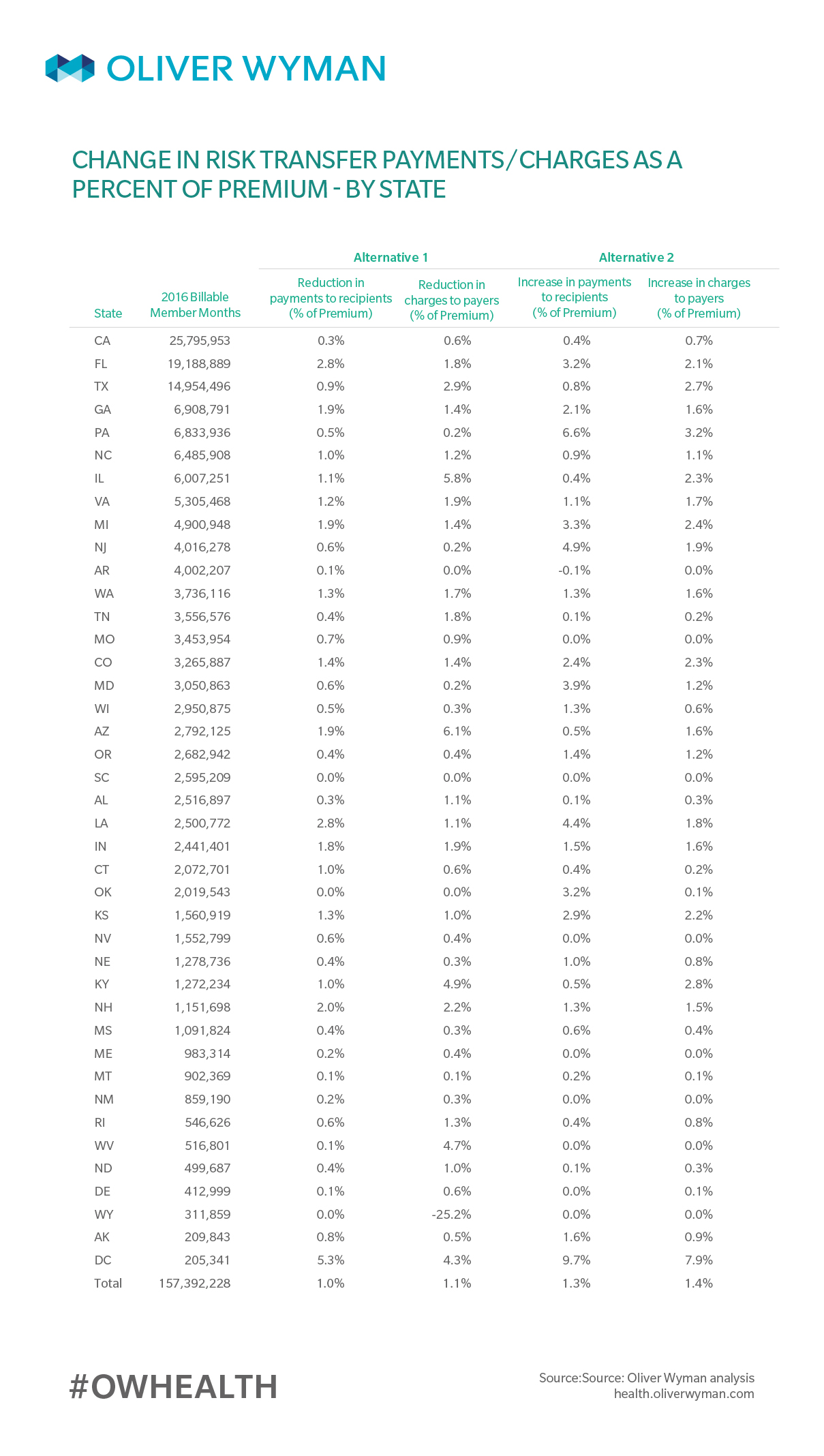