Food as Medicine: Health Beyond the Medicine Cabinet

Key Takeaway
We need a cross-industry approach that works in an integrated way within each individual consumer’s ecosystem. #FoodAsMedicine #OWHealth
Share

Annual healthcare costs in the United States top $3 trillion dollars, with much of this cost preventable. ($3 trillion dollars, by the way, is nearly a year’s worth of groceries, for the entire US population.) “Good nutrition” can be a powerful antidote to much of the illness we see, and as a direct result, drive healthcare costs down dramatically. The role of nutrition in health, however, is typically not ‘top of mind’ in day to day choices…

Because choices such as these persist without any real intervention or education, poor nutrition drives disease:

The time is ripe for purposeful collaboration across the ecosystem to help more people understand their daily decisions dictate whether food is a toxin or food is medicine.

"The time is ripe for purposeful collaboration across the ecosystem to help more people understand their daily decisions dictate whether food is a toxin or food is medicine."

How to Drive the ‘Food as Medicine’ Movement Forward

In order to accelerate the pace of progress in driving positive food-related behavior, we, as participants in the ‘Food as Medicine’ ecosystem, need to execute three steps:

Why Aren’t We There Yet?

Many (most?) people lack motivation and/or robust knowledge about the impact of food choices on their health. While it’s common sense that poor long-term dietary decisions negatively impact health, the desire for immediate fulfillment and satisfaction typically wins over making "the healthy choice” (especially because the downside isn’t nearly as tangible in the short-term).

Moreover, society creates an environment that capitalizes on the aspects of human nature; it's incredibly easy to make poor dietary choices. Take powerful constituents, for example: buy fresh produce and spend an hour chopping and steaming vegetables, or swing through the drive-thru on the way home? And often times we just don’t have the education (even when we search for it), so we make poor choices unknowingly.

As a result of our collective inability to address the massive number of diet-related conditions, healthcare costs may increase without bound over the next quarter century. National healthcare spending is estimatedto increase annually by 5.8 percent over the next ten years. That’s a massive – but importantly, preventable – spike!

"Buy fresh produce and spend an hour chopping and steaming vegetables, or swing through the drive-thru on the way home?"

Reaching Consumers with Consistency is a Battle Royale

A common question from those both inside and outside of the healthcare industry is why aren’t more physicians — and health systems, more broadly — helping drive better dietary choices? The bottom line is even if they did, we would still be swimming upstream in the journey to drive long lasting impact. Solving for ‘food as medicine’ requires a long-term, complex “battle royale” across a plethora of touchpoints – touchpoints that require the involvement of stakeholders well beyond healthcare. If someone sees her physician for twenty minutes twice a year, even the best-intentioned physician-patient discussion on adapting better nutrition habits will soon be forgotten.

To educate the masses on healthy diet-related behavior, and have it impact food decisions on a long-term basis, requires more frequent touchpoints. This, in turn, requires participation from a host of different constituents, many outside the traditional health industry. Consumers’ exposure to other influencers that play into the psyche and the subconscious, like consumer goods manufacturers and marketers, grocery stores, television and social media ads, makes those entities very influential. To highlight just a few sources of influence:

First, those designing and implementing food pricing policies have tremendous influence. A healthy diet costs the average American about $550 more annually compared to an unhealthy diet. Researchers from the Harvard School of Public Health, pushing for the implementation of policies that lessen this gap, assert this price difference poses economic hardship for some. (This same amount, sadly, is a mere fraction of the downstream healthcare costs related to an unhealthy diet.)

Second, the medical education system heavily impacts how capable the healthcare industry at large is to influence food choices. While the healthcare workforce has great potential to help address the ‘food as medicine’ gap, only a reported 1 in 5 US medical schools require students to take a course in nutrition. Most medical students complete fewer than 25 hours of nutrition instruction over a four-year period. Thirty years back, a reported 37 percent of medical schools even offered a nutrition course, with this number now at 27 percent. When the idea of "nutrition as medicine" is such a small component of training, it naturally becomes less of a focal point for physician-consumer conversations, even for the most well-intentioned care givers.

Third, the mass marketing of junk food to children and the food industry’s hypnotic power over consumers heavily influenced food choices. The US would do well following England’s recent lead to ban cartoon characters like Tony the Tiger and the Milky Bar Kid as part of junk food marketing campaigns. We’re beginning to see some (very small) steps in the right direction. Sesame Street’s Cookie Monster is slowly parlaying into healthy eating – he now proclaims “A cookie is a sometimes food!” as opposed to “Me want cookie!”

Fourth, what is taught, and learned, in early education about diet and nutrition sets the foundation for how children make food related decisions that stem into adulthood. For the most part, historical approaches – and those used today – are fairly ineffective in influencing food choices. Although the original Food Guide Pyramid from the ‘90s was replaced in 2005, the new version is “vague and confusing,” according to Harvard T.H. Chan School of Public Health. The new version uses just colors and proportions to depict the new pyramid, requiring additional effort (navigating the United States Department of Agriculture website) for details and clarification on the chart’s meaning. In a world where there’s already "not enough time", this is an extra step many likely do not take the time to do.

Three Angles to the Intersection of Health and Nutrition

To better understand how the ecosystem can work together to change consumer health behavior, let’s first define our discussion parameters. According to Alison Steiber, PhD, RDN, Chief Science Officer of the Academy of Nutrition and Dietetics, the world of ‘Food as Medicine’ – the intersection of health and nutrition – consists of three key angles. 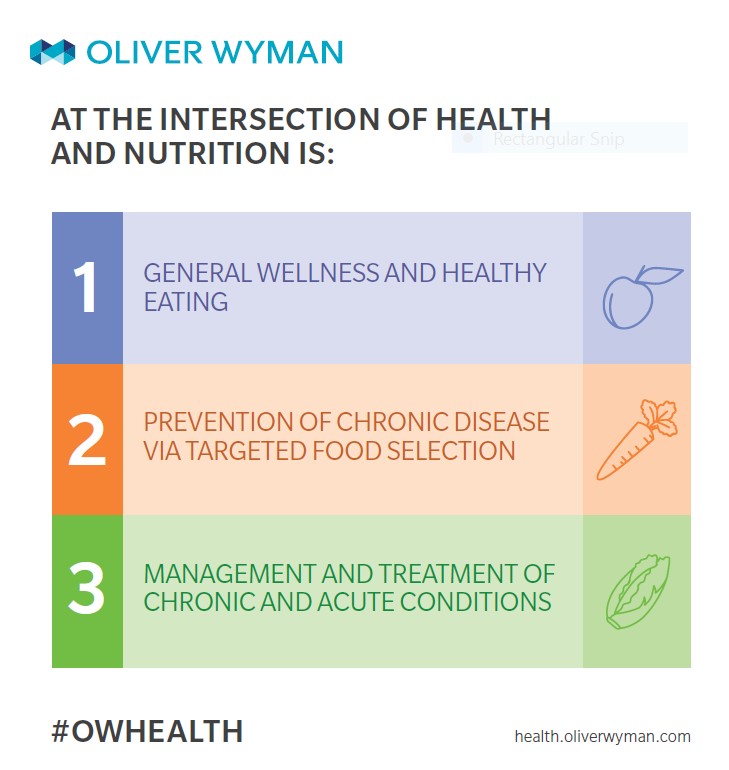 The first angle entails general wellness and healthy eating; the second entails the prevention of chronic disease via targeted food selection (such as to prevent weight gain); and the third is about management or treatment of chronic or acute conditions (such as the control or reversal of diabetes).

These three angles, in turn, span across a comprehensive and complex ‘Food as Medicine’ ecosystem, comprised of all industries and players with some influence on consumer nutrition and dietary choices.

Addressing the Challenges of a Complicated Ecosystem

The ‘Food as Medicine’ landscape is a complicated, intricate network of interlinked constituents across a range of traditional industry lines. Not only are many players involved, but many more discreet, yet critical, connections exist than are initially apparent.

While we can continue to “let a thousand flowers bloom” and optimize across numerous independent agendas, to accelerate progress and drive large scale change, we need a cross-industry approach that works in an integrated way within each individual consumer’s ecosystem.

While this is certainly a beast of an effort, we can start small and scale the successes to redefine the role of nutrition as a prominent part of the patient journeys of tomorrow.