Key Takeaway
Amazon or Facebook or Google’s data vector can now classify you with more accuracy than any #EMR data base. #OWHealth
Share

The healthcare industry is suddenly abuzz on blockchain’s untapped potential to increase care quality while lowering costs. Blockchain’s potential across the healthcare spectrum ranges from helping create patient vaccine registries to streamlining and sharing blood test information with greater ease. But is healthcare’s blockchain hype justified or just to be set aside?

To learn more about what those in healthcare need to know most about blockchain, Tom Robinson, Partner, Health and Life Sciences, Oliver Wyman, Aditya Lingampally, Principal, Oliver Wyman, and Santiago Doria, Senior Consultant, Oliver Wyman, recently spoke with Ted Tanner, Chief Technology Officer and Co-Founder of PokitDok, an artificial intelligence and machine learning company specializing in healthcare data and blockchain platform services. Ted, who presented at this year’s HIMSS conference on blockchain’s hype in healthcare, helps create innovative blockchain solutions for healthcare players. Below, Ted shares his perspectives on blockchain’s evolution in healthcare thus far, and where technological advancements may lead the industry in time.

Blockchain is Opening the Once Closed Networking Door

Blockchain is enabling newfangled networking effects across household companies and social media platforms that were once not possible, especially in healthcare. Companies that typically would have never operated together can now collaborate seamlessly via a streamlined series of networks. Companies are now a product of network effects, namely the big “GAFA” four – Google, Apple, Facebook, and Amazon.

“Millennials expect those network effects to take place. Ergo, these companies have to come to the table, have to agree on computational consensus, and have the network be the service,” Ted explained.

That is a fundamentally different approach to how health technology operates today. But because these technologies are now well established, new behavioral changes are emerging, as there are only so many different ways these consolidated silos can operate as one.

And as organizational adversaries come together, they are utilizing blockchain to simplify administrative capabilities, drive better clinical outcomes, and more.

Regarding one such network effect, one prediction of Ted’s from about two years back – that clearinghouses would one day be disintermediated – appears to be coming true.

“We’re seeing companies want to forgo usage of the electronic medical record (EMR) systems and create more of a dynamic personal health record, instead of having the EMR be the center of the universe,” he said. Amazon or Facebook or Google’s data vector can now classify your behavior with more accuracy than any EMR data base, he emphasized. This behavior data is central to identity by consensus. What you do is who you are so to speak.

“We’re seeing many companies wanting to push that concept, because they see the EMR and the clearinghouse as a high-friction environment; they want a frictionless interaction.”

“What we’ve done with clearinghouses, we’ve also done on the pharmaceutical side. We have enabled our Application program interfaces (APIs) across the board as smart contracts. This is present state. We’re currently in proof of value contracts that will be moving into production this year,” Ted explained.

“What you do is who you are, and not any one company has the best data. Historically, if you thought in a master data management scenario or a matching scenario – which is historically how provider systems or payers match their data bases to Jane Doe – this network is a service by consensus where a weighted probability computes Jane Doe’s best probability at any given time and context,” he explained. Compared to the standard usual 75 percent accuracy match, which Ted declared merely “atrocious,” he’s seen near perfect accuracy – 99.999 percent – based on the consensus network effects.

Identity by consensus is the spearhead. Hence, Blockchain is driving four primary use cases in healthcare: 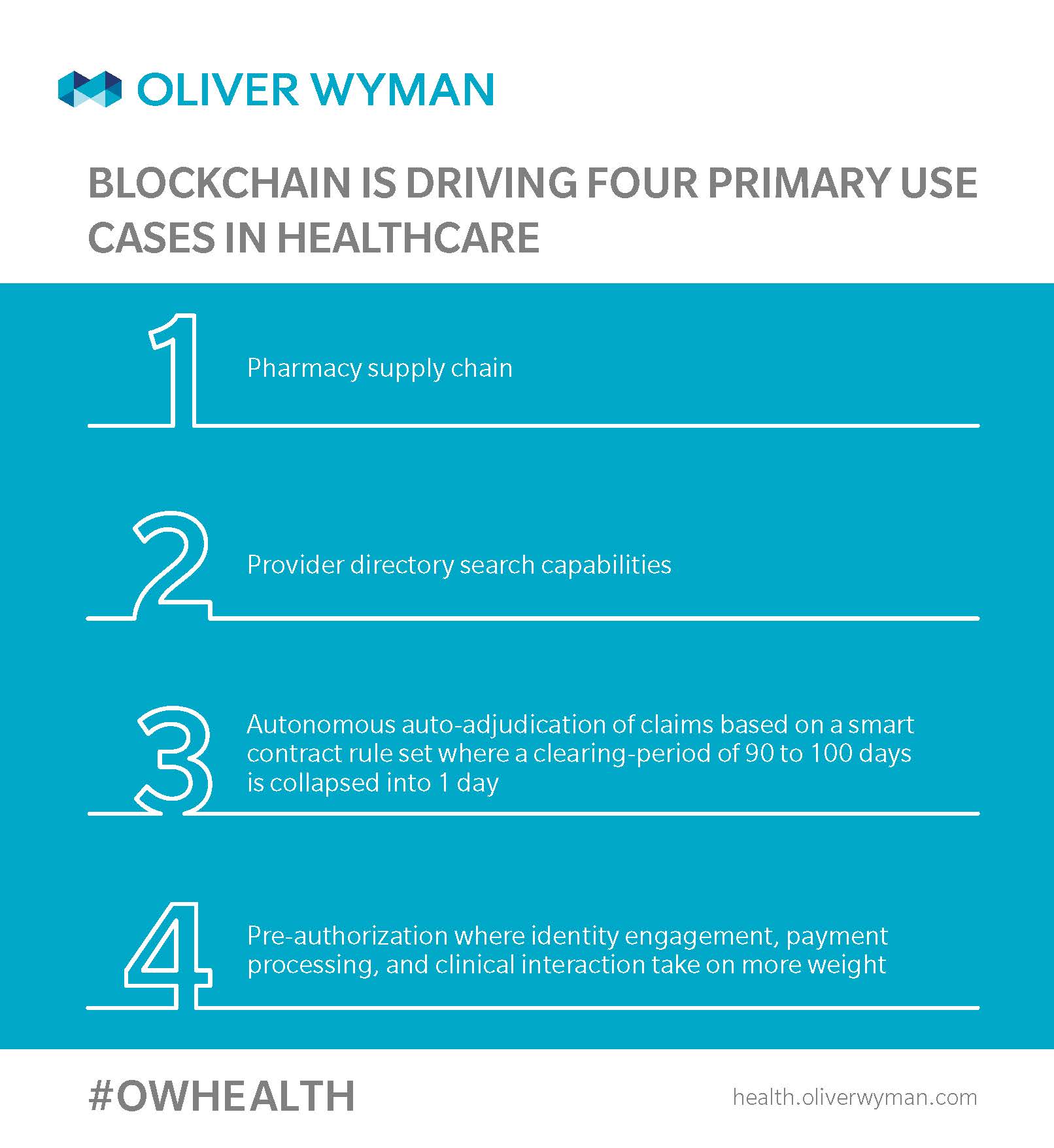 Although other solutions aside from blockchain can clearly drive the four aforementioned examples, blockchain’s network and transparency capabilities differentiate it as a standout solution for these, and other, use cases. Although, autonomous auto-adjudication, for instance, is indeed possible without blockchain, blockchain is unique in that it offers unparalleled healthcare consumer classification capabilities, including data records, data vectors, and preauthorization functionalities that extend far beyond a single siloed approach.

“The static nature of the rules is usually ensconced in SQL databases, and nobody has any idea how they operate. In an enterprise blockchain, everybody will see the smart contract rules and results of the transaction, but not necessarily the data it’s processing on. One of the advantages is everyone sees the operational characteristics, operational acuity, as well as if rules actually need to be changed in real time.”

“If you are a middleware or a middle IT person in the healthcare space, you are getting ready to be washed out,” Ted emphasized.

In time, blockchain, which will face resistance from those incumbents who neither understand nor try to adapt alongside blockchain’s evolution, will ultimately thrive and prosper. “There will be a network of networks. There are going to be multiple blockchains,” he predicted.

“If you want to know your customer in an immutable, secure, temporal fashion, go engage with a Proof of Value today, and experiment,” he stressed. “If you are not in a Proof of Value contract with somebody, moving transactions around, you’ve already missed the boat.”

Subscribe
Is Blockchain the Answer to Healthcare...
Driving Success: Building a Disruption-Ready...
Cyberattacks and the C-Suite: 5 Strategies to...