The DNA of Effective Prevention

Key Takeaway
To cut costs, the industry must move from treating #disease to preventing & detecting it earlier #OWHIC
Share

Thanks to technology, we can finally retire the old business adage that says you can only pick two out of good, fast, and cheap. Today, we have Google searches that provide high-quality answers to our questions in a matter of milliseconds – for free. Consumer electronics like personal computers, smartphones, and flat-screen televisions keep getting lighter, faster, easier to use, and more affordable. In fact, the same can be said for a whole host of consumer products from appliances to automobiles with autonomous driver-assistance features.

Technology has engendered a reasonable expectation among consumers for ever-higher quality products at ever more affordable prices. That is, except in healthcare.

Contrasted with our demand for consumer product perfection, we’re appallingly tolerant when it comes to healthcare, despite its almost annual higher-than-inflation cost increases. Total healthcare spending in the US reached nearly $3.4 trillion in 2016, and the Centers for Medicare and Medicaid Services (CMS) projects it will climb to $5.5 trillion by 2025, outpacing the growth in gross domestic product (GDP) for the period. In fact, despite having the highest per capita healthcare expenditure in the world, the US ranks towards the bottom among the 35 countries in the Organization for Economic Co-operation and Development (OECD) in terms of most health outcomes. It trails other developed economies in such measures as life expectancy, health coverage rate, and deaths from preventable diseases.

What's going on here? How can we harness the power of technological innovation to achieve “good, fast, and cheap” for our industry? The unsung hero of efforts to bring affordability to medicine isn’t better treatment; it’s better prevention. And one engine that could be driving better prevention is genetics.

One of the most productive things the healthcare industry can do to cut costs is move from treating disease to preventing it – or at least detecting it earlier. Studies show that five percent of the population accounts for nearly half of all healthcare spending. Identifying that five percent and treating them earlier could have a huge impact in both lives and money saved.

But prevention also can at times be an overly blunt instrument. Widespread PSA screening, to offer one notable example, has led to diagnosis of prostate cancers in men who would have otherwise died from other causes never knowing they had cancer. Universal wellness programs also miss the mark frequently, encountering roadblocks to getting people to do the two things they already know they need to do: Exercise more and eat less.

This is where precision prevention comes in. For self-insured employers, about one percent of their members account for more than 30 percent of their cost of medical claims. Advances in genetics can help identify those most at risk for certain diseases and put them on a path of early detection and prevention. Focusing on the population more likely to get sick allows us to precisely target our investments in prevention on the people who need it most.

For example, there are conflicting guidelines for how often women should get mammograms and at what age they should start. These varying one-size-fits-all recommendations contribute to confusion in an area where compliance is critical. But when a woman knows she has a mutation that puts her at greater risk for breast cancer the decision becomes a lot clearer. How much is there to gain? Earlier detection of all new breast cancer cases would have saved about 22,000 lives and reduced treatment costs by $4.5 billion in 2017. 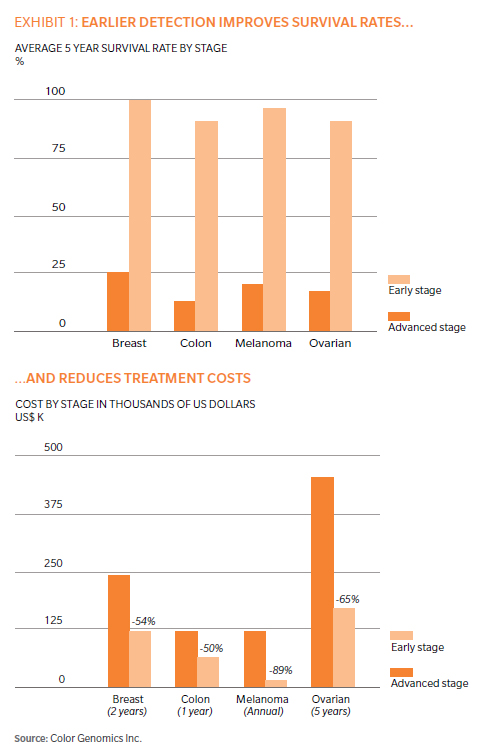 As the genetics industry has matured, the cost of determining a person’s hereditary risk for life-threatening diseases like cancer and heart disease has dropped from thousands of dollars to just a few hundred. Making important health information so much more affordable enables broad populations to take informed steps on prevention. It also provides opportunities for earlier intervention, as an informed consumer is more likely to get the necessary screenings that would enable early detection.

An informed patient is often a more efficient healthcare consumer. By shifting intervention from treatment to prevention, genetics can reduce the number of people facing difficult, uninformed spending choices. If I have cancer, I want to get well at any cost. If I’m just studying options for staying healthy, I can afford to shop around. It’s at this end of the price elasticity curve where healthcare consumers have excelled at demanding high-quality, lower-cost options.

Finally, as improved access to genetics yields larger amounts of data, machine learning is providing key insights that allow us to interpret the information. For example, as scientists identify specific variants that require special attention, machine learning can find ways to flag variants that demand similar attention but might have been missed by manual review.

And beyond the effect of individual mutations, our understanding of the impact of multiple mutation permutations will accelerate with the assistance of advanced machine learning.

By improving outcomes and minimizing error rates and other costs from manual interventions, AI and advances in genomics are moving us ever closer to our goal of more timely and efficient delivery of preventive services. And while it won't happen overnight, that will help unleash the power of consumers to demand better, faster and cheaper in their healthcare.