Availability of Free Bronze ACA Plans on the Rise

We projected in May some consumers eligible for premium subsidies (eligibility is for those with incomes from 100 percent to 400 percent of the federal poverty level (FPL)) would have access to free bronze plans in 2018 as a result of uncertainty around cost-sharing reduction (CSR) funding. Now that President Trump has stated the funding will not continue, and 2018 premiums in many states are publicly available, we can see the prevalence of the availability of zero premium bronze coverage in many states across the country.

Premium subsidies are determined based on the difference between the premium for the second lowest cost silver plan and a fixed percentage of income that varies with the insured’s income. Consumers can use their premium subsidies to purchase any plan offered on the Marketplace at any metal level. If they purchase another metal plan, such as bronze or gold, they would forfeit any CSR they would be eligible for. But, those consumers making more than 250 percent of the FPL are not eligible for CSR and those between 200 percent and 250 percent of FPL are eligible for a relatively small reduction in cost sharing.

Free Bronze Plans on the Up and Up

The availability of no cost bronze coverage has been recently evolving. In 2017, certain consumers could purchase bronze coverage for free. Based on our analysis recently featured in the Wall Street Journal, the prevalence of free bronze has increased significantly in 2018. This is a direct result of insurers loading the cost of the lost CSR funding onto silver plans, as most insurers did, rather than spreading it across all plans. This increases the subsidy without increasing premiums for other plans, and therefore reduces the net cost of plans at other metal levels that were not loaded.

The states with the greatest availability of free bronze coverage are those that are higher cost states in general and that have a greater difference between the cost of bronze and the cost of the second lowest cost silver plan. For example, in states where a 60-year-old making 350 percent of the FPL (about $42,000 in most states) had free coverage available in at least 70 percent of counties, the cost of the second lowest cost silver plan is $290 more on average per month than in states where fewer than 70 percent of counties have free bronze. The difference between lowest cost bronze and second lowest cost silver in these states is roughly $200 per month on average. In the four maps that follow, we show the prevalence of the free bronze plans for 2018 at various age and income combinations. 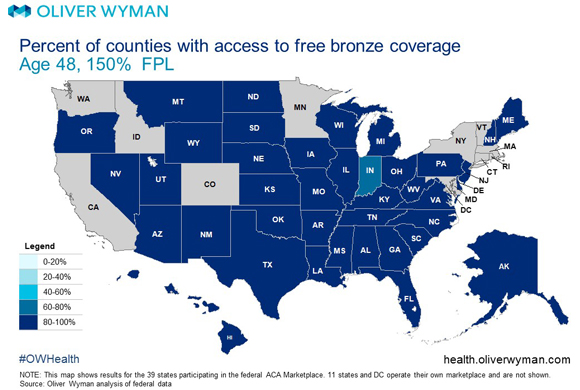 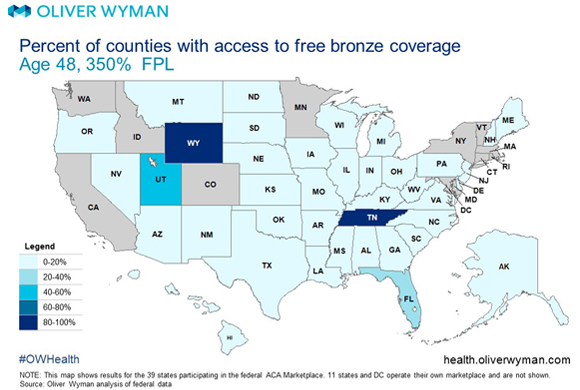 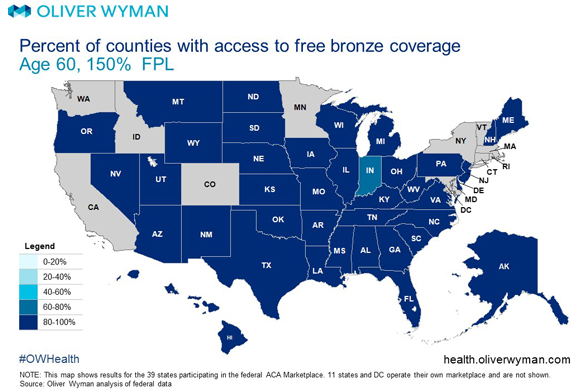 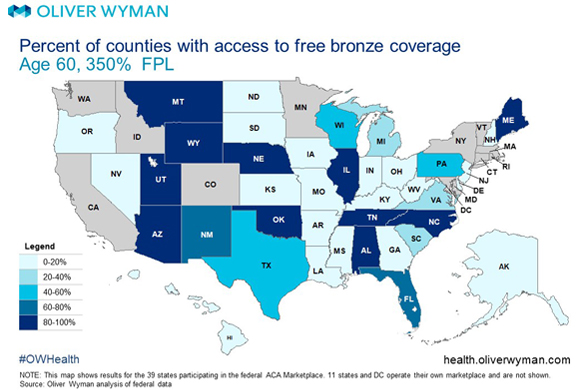