The future of the individual health insurance market is unclear, as market and regulatory uncertainty have led to premium increases and the exit of some payers. With open enrollment just around the corner and health reform on hold (for now), policymakers and industry leaders are considering a variety of strategies to stabilize the individual market.

New analysis from Oliver Wyman breaks down the challenges facing insurers in today’s individual market and explores the potential impact of stabilization proposals. You can read the full report here. Below, Kurt Giesa, FSA, MAAA, and Peter Kaczmarek, FSA, MAAA, of Oliver Wyman Actuarial Consulting provide a summary of their analysis.

Insurers incurred steep financial losses in the individual market after the ACA exchanges launched in 2014. For insurers and their insureds, one of the more costly provisions of the ACA is the requirement that insurers provide coverage to anyone willing to pay their premium (guaranteed issue) at a price that does not reflect the individual’s risk (modified community rating). 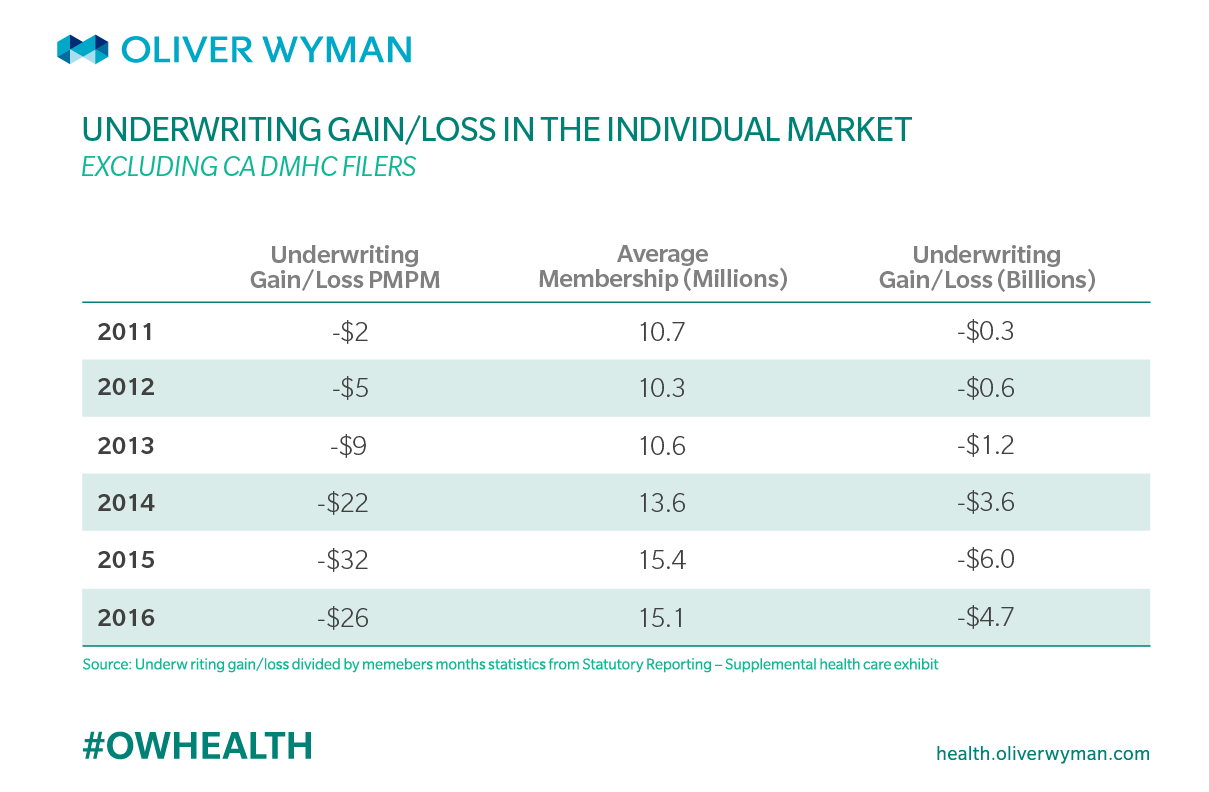 That means someone with very low anticipated health costs pays the same amount for coverage as someone who is at the same age and income, but has multiple chronic conditions or other costly health issues. The guaranteed issue and modified community rating provisions have made health insurance accessible for many, and this could be considered a societal “good.”

However, these provisions are also a leading driver of costs in the individual market. Because the guaranteed issue and modified community rating provisions allowed more people with costly health issues to access coverage, claims and medical costs increased. Our analysis shows that these ACA provisions led to a 54 percent increase in the average cost of coverage in 2015. That breaks down to an estimated $62 PMPM, or $744 per person over the course of the year in 2015, and roughly $10 billion market wide in 2015. 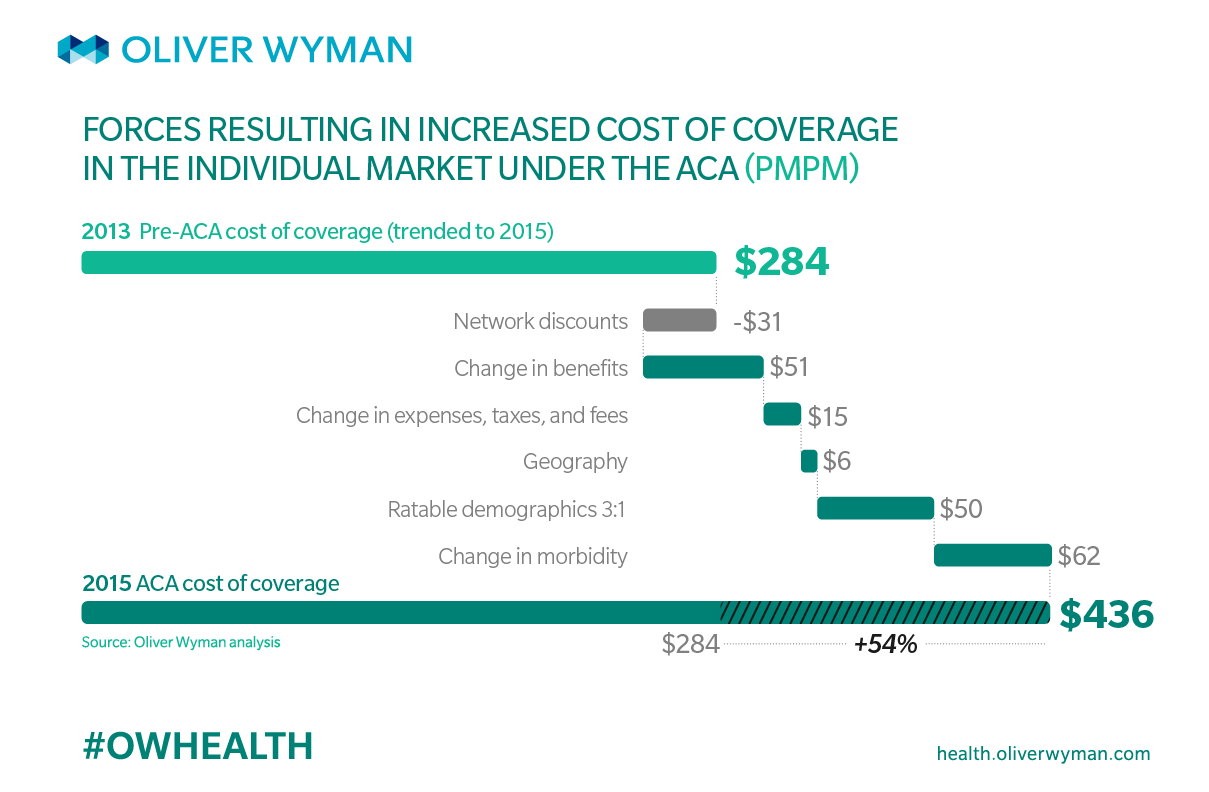 Trending that $10 billion forward, and accounting for continued guaranteed issue and modified community rating, yields a projected cost of roughly $15 billion by 2020. That is a cost that will be borne primarily by individuals purchasing health insurance off of the Obamacare Exchanges, and by the federal government through premium subsidies for eligible individuals. However, recent history shows that many young, healthy enrollees are not willing to bear this cost, and so may choose to go without insurance.

To avoid an exodus of young, healthy individuals and further destabilization of the individual market, policymakers are considering a number of stabilization tactics. These include continuation of cost sharing reduction (CSR) payments; strong enforcement of the individual mandate; extending the moratorium on the health insurance tax; and a dedicated external funding mechanism to help cover the cost of guarantee issue and modified community rating.

To determine how these proposals could impact the individual market, we used our Healthcare Reform Micro-Simulation Model to simulate the impacts on enrollment, average premiums, and federal spending. We found that together, these approaches could increase enrollment by roughly 2 million individuals, reduce average premiums by more than 20 percent, and be roughly revenue neutral when considering premium subsidies and CSR payments. 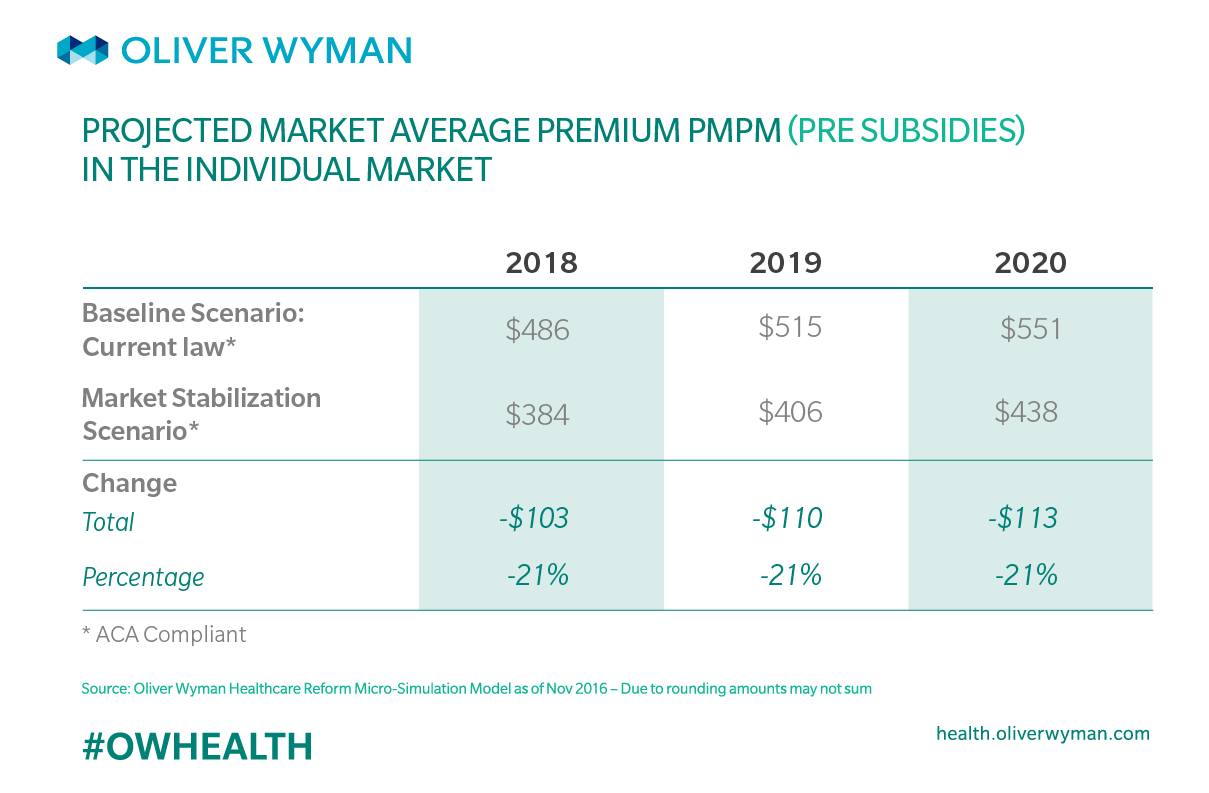 Discontinuing CSR payments will result in considerable uncertainty being introduced into the market. Insurers that have a higher share of CSR-eligible enrollees could be disadvantaged and we may see some payers leave the market. As the CBO’s analysis showed, continued funding of CSR payments could help control total federal spending under the ACA.

Lax enforcement of the individual mandate could reduce individual enrollment to below 14 million in 2018. As younger and healthier people opt out of the market, the cost of coverage would increase, and market-average premiums would increase in parallel. Those who qualify for premium subsidies would be insulated from the premium increases, but government spending on those subsidies would increase. Those ineligible for subsidies would have to pay these higher premiums or leave the market, and older, less healthy insureds would be more likely to remain in the market. Strong enforcement of the mandate could help to keep enrollment and morbidity in the individual market at desirable levels.

Meanwhile, the reinstatement of the health insurance tax (HIT) would result in an increase in premiums of roughly 3 percent in 2018. The tax was put on hold for 2017, but is set to be reinstated for 2018. Continuation of the moratorium would help reduce the significant premium increases and provide more stability to the individual ACA market.

Finally, our analysis shows that a dedicated external funding mechanism, such as the transitional reinsurnace program that ended in 2016, could mitigate premium increases and help bring more young, healthy insureds into the market. In fact, our modeling shows that the lower premiums resulting from external funding would attract a younger and healthier population, as well as more non-subsidized individuals. And a significant portion of the reinsurance costs  – approximately 80 percent – would be offset by a decline in federal spending on premium subsidies.

Subscribe
New Analysis: How the ACA’s HIT Will Impact...
A State-by-State Approach to Stabilizing the...
Analysis: Potential Impact of Defunding CSR...