The journey towards a consumer-centric marketplace challenges many traditional healthcare organizations, especially when digital integration is required. Across the healthcare landscape, the digital changes necessary to create magnetic experiences are slow in coming; but it’s not lack of desire that has stalled growth, as most have dedicated initiatives to become more digitally nimble. The real hurdle is that existing (and usually dated) technology hinders a company’s ability to respond faster to change.

What is the solution? Hire a Frugal Modernizer CIO. The frugal modernizer focuses on developing a new funding model that takes a smarter approach to modernizing existing technology through continued and preventative maintenance.

Yahoo! offers a sobering lesson for any organization doubting the benefit of frugal modernization. Yahoo! has acknowledged that their websites were originally built in a monolithic fashion, which made rapid changes difficult. In contrast, their main – and more nimble – competitor Google was able to adapt and evolve with much greater effectiveness. While Yahoo! initially may have been the darling search engine, in time they lost their edge to Google. Yahoo’s infrastructure was built at a time when digital assets didn’t focus on continued modernization. On the other hand, Google sustained a flexible, modular, and continuously refreshed infrastructure. As a result, Google is today’s marketplace leader while Yahoo! sold off its assets.

Today’s healthcare IT issues mirror Yahoo!’s experience in that many healthcare companies are still navigating fixes the wrong way. When the inefficiencies inherent in older systems become too great, many healthcare business and IT leaders turn to complex and expensive solutions, including:

These historical solutions gloss over underlying problems. When “quick fixes” are finally completed, the cost almost always exceeds initial budget estimates, original timelines are surpassed, and the solution basically provides similar functionality to what previously existed. In many situations, this practice costs hundreds of millions of dollars with minimal ROI.

How to move above and beyond to get it right

Moving above and beyond the unappealing choices of the past requires radical rethinking of IT funding where frugality reigns. When companies begin to think like the frugal modernizer CIO, they can create continually refreshed platforms at lower overall costs. With this mindset, key technology and infrastructure platforms are not allowed to become antiquated.

2. Selective refresh. Earmark funds for refreshing specific, and different, technology asset groups each year so that no asset becomes outdated. For example, a company can task IT to select specific platform components to be upgraded. By continually refreshing small modular components, it allows the platform to be as effective today as it was when initially designed. With continual upgrades, the platform can better accept new technology.

4. Amplify planned updates. Here, funds designated for adjacent application fixes are either combined or expanded to create more substantive impact than possible with smaller fixes. For example, an IT organization can align its modernization effort with the funding available to make fixes. If an asset’s code base is being opened for a fix, IT creates an opportunity to modernize at the same time with little additional cost by grouping small fixes together or requesting incremental, meaning small, additional funds to amplify the effect.

Sooner or later, every organization will encounter difficult decisions to keep pace with digitalization. These four fixes from the frugal modernizer CIO can fit in almost any organization’s game plan and, more importantly, they’ve been proven successful. If traditional players aren’t willing or ready to modernize digital infrastructures in nimble and smart way, they’re at risk to becoming the next Yahoo! 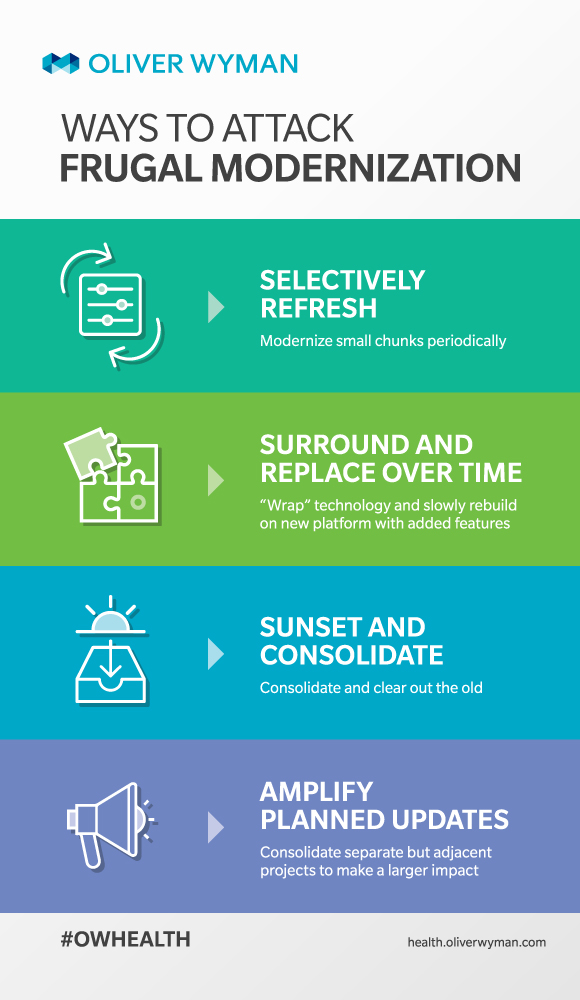 Subscribe
What Does it Now Take for a CIO to Succeed?
Getting Digital: Three Ways Healthcare...
Infographic: Introducing the New Digital CIO