Key Takeaway
What happens next w/ #AHCA and CSR funding will shape the competitive & rate outlook for 2018 and beyond.
Share

The initial deadline for health insurers to file their 2018 Healthcare.gov rates has now come and gone. The filings are often viewed as a weathervane for the market as a whole, and scrutiny of payers’ actions was especially high this year. But the reality is the rates submitted this week are not final (most are not even public yet) and the market is far from set. Payers submitted rates because they had to, but the real story is yet to come.

What was not surprising about this year’s rate filings?

It is true that there is a tremendous amount of uncertainty in the ACA market, but it’s not particularly surprising that so many payers filed rate requests. That’s because the rates are not set in stone, and payers still have opportunities to adjust rates or withdraw from the market. Payers have until August to adjust rates for on-exchange plans and until October for off-exchange plans. And in some states, insurance commissioners are allowing payers to resubmit rates once it becomes known if cost sharing reduction (CSR) payments will continue.

In addition, payers have until July 1 to decide to withdraw from the individual market altogether. HIPAA requires payers to give individual policyholders 180 days’ notice before exiting the individual market. Payers that intend to terminate some (but not all) of their plans are required to give members only 90 days’ notice. This means those payers offering off-exchange plans have a withdrawal deadline of October 1.

Takeaway: Despite the rate filing deadline, it’s still too early for payers to reliably predict their competitive environment. There is still much uncertainty and too many opportunities for local landscapes to change significantly. Now more than ever, payers should be watchful and have alternative strategies in place in order to be ready to react quickly to the near-term market and regulatory environments. Given the notification requirements and upcoming timelines, there may not be much time to react.

What was most surprising about this year’s rate filings?

The extent to which continued CSR payments will impact rates. We know – from rates that have already been made public and our recent survey of payers’ 2018 plans – that payers are expecting CSR defunding to have a significant impact on 2018 rates. According to the survey, almost 60 percent of respondents plan to adjust rates if CSR payments are halted. Meanwhile, 42 percent of respondents said they would withdraw from the market if CSR is defunded.

A separate analysis performed by Oliver Wyman Actuarial Consulting found that defunding CSR would increase rates by 11 to 20 percent. (The variation is due to the number of enrollees eligible for CSR subsidies in a particular market or enrolled with a particular payer.) 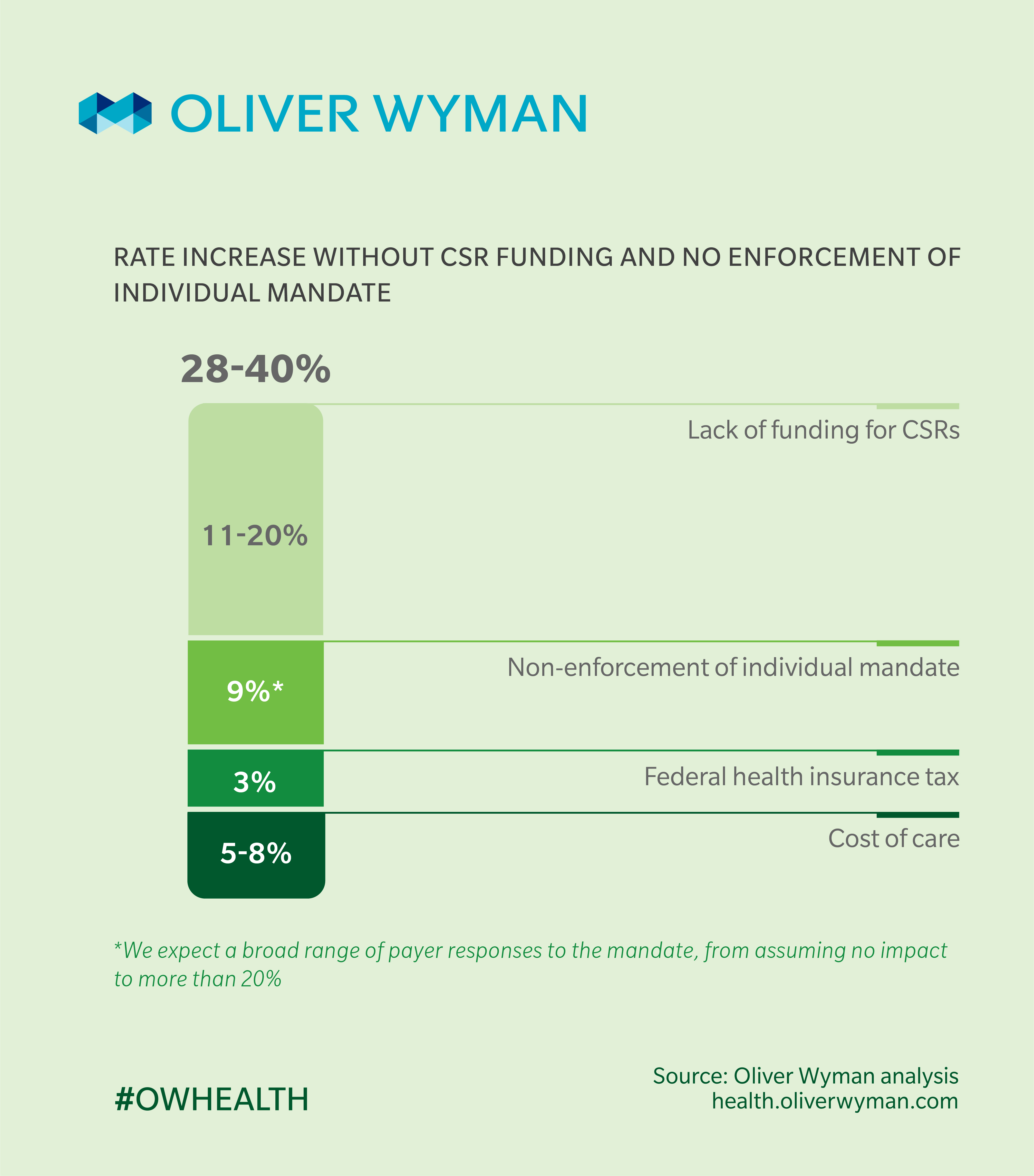 The Senate version of the American Health Care Act, which was released June 22, does include an appropriation for two years of CSR payments; but it is not clear if the bill will pass, or even if it will make it to the Senate floor for a vote.

Takeaway: What happens in the coming week and months on AHCA and CSR funding will significantly shape the competitive and rate outlook for 2018, and beyond. Payers should be ready to take their next step in the event CSRs are not funded.

What about the high-profile exits by players like Anthem (in Ohio, Indiana, and Wisconsin), how did that impact the filings?

The impact of the exits will vary, obviously, by market. In general, the exit will likely exert additional pressure on the remaining payers in the market – this because the carriers that exited had poor financial results and the remaining payers will need to absorb those costs.

Takeaway: For those markets with relatively little competition, some local or smaller payers may find themselves as one of the few remaining players in the market. That could have devastating results if the 2018 rates are not adequate to cover the risks. Payers need to be acutely aware of the characteristics of their market and have modeling to adjust their own potential risk pool.

Payers find themselves in a watchful waiting period – waiting to see what happens with repeal and replace and waiting for some sort of clarity on the CSR issue. Most payers are planning for a number of possible scenarios, including refiling rates, withdrawal, or charging ahead should the market dynamics stabilize.

Takeaway: But watchful waiting does not mean standing still – especially in this complex market. The rate filings to date are directionally informative, but we expect rates and players to change as policy and regulatory positions evolve. Plans need to be running several scenarios so they can respond quickly to the competitive and government changes that play out.