New research from Oliver Wyman reveals that the majority of health insurers surveyed remain committed to the ACA exchanges, but with some adjustments in strategy and continued watchfulness.

In early-April, Oliver Wyman surveyed payers to gain insights into the 2018 individual market and payers’ plans regarding market participation and premium rate increases. The results are preliminary and could change as payers collect more data on their 2017 ACA performance and risk pools. In addition, regulatory and legislative changes could impact payers’ decisions.

Nonetheless, the responses shed light on the near-term future of the individual market and payers’ strategies for the exchanges. Here, Oliver Wyman’s Beth Fritchen, FSA, MAAA, and Todd Van Tol share the survey findings and offer insight into the market impact.

This survey, along with our continued conversations with the market, reveals that payers are approaching 2018 cautiously; yet the vast majority of those surveyed intend to stay. Just one respondent in our survey said it plans to exit the exchanges. (However, we note that payers may withdraw from the market at any time prior to final agreements with the public exchanges and new information or policy developments could change their assessment of the situation.)

Of the payers surveyed that intend to participate in 2018, 70 percent are carrying on as is, with no major shift in strategy. The other 30 percent are adjusting and pulling the levers they can to stabilize their ACA lines of business. Strategic recalibrations include changing the number of plans offered (eliminating gold-level plans, for example), or shifting to plans with tighter controls, such as narrower network plans or HMOs.

While most payers indicated they are maintaining their existing geographic footprint, about 25 percent are adjusting strategy within those geographies—withdrawing from certain regions and (in a few cases) expanding into new regions. 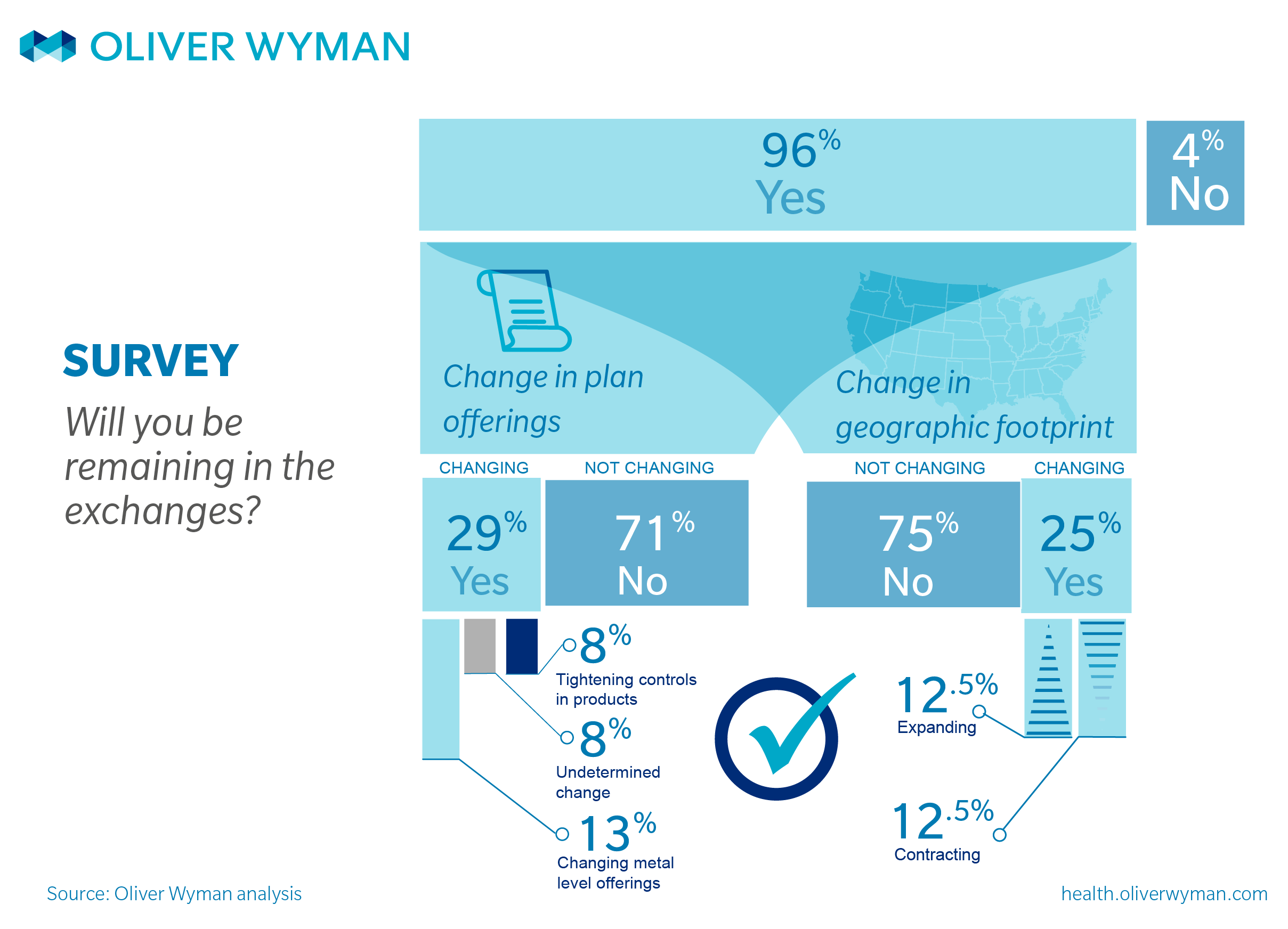 With the June 21 rate-filing deadline fast approaching, all eyes are on payers for some sort of indication of what the 2018 rate increases will look like. However, our survey reveals that most payers are taking a more cautious approach to rate setting this year. Those that are staying in the individual market intend to wait as long as possible to set those rates. About half of the respondents to our survey indicated it was too early for them to determine the rate increase and that they needed more time to evaluate their 2017 risk pools and performance. Given the historical performance of this market and the current uncertainty regarding cost sharing subsidies, we are not surprised that carriers are trying to gather as much information as possible when determining 2018 rates.

That said, when we examined the preliminary rate increases of those that are ready to set rates, we found wide variation—with some payers planning single-digit increases and some planning increases greater than 30 percent. 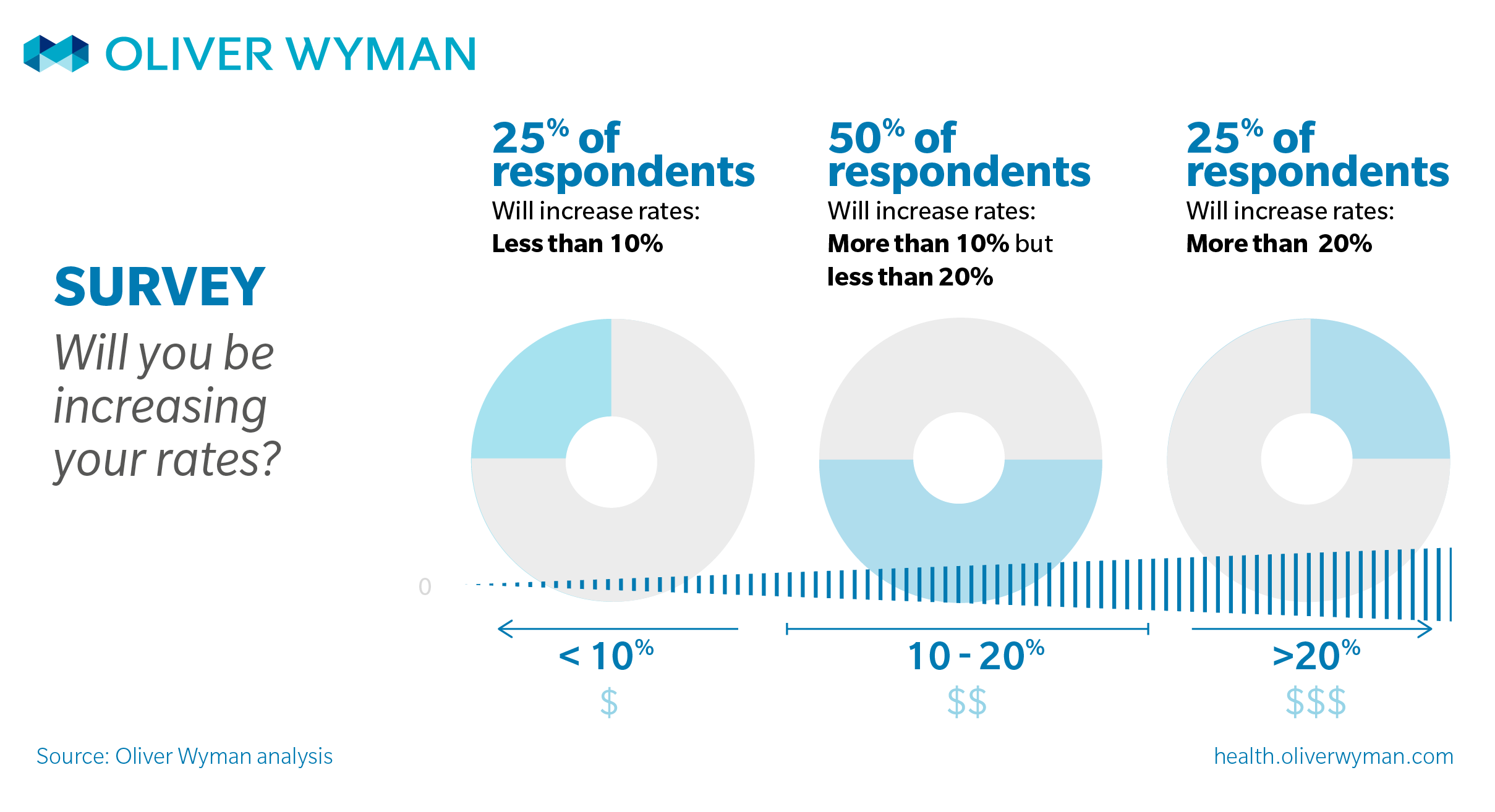 The survey indicates that geography and local market pressures have the most influence on the payers’ proposed rates. For example, the past performance of the state market, local competition, and changes to healthcare provider reimbursements and provider network structures all influence the amount of proposed increase.

We expect that as carriers gain additional knowledge of their 2017 experience, their decisions will become more firm. Likewise, if there is definitive action on cost sharing subsidies or other policy proposals, payers may revisit their 2018 positions. For now, though, issuers seem willing to continue to serve this market.