Key Takeaway
Copy and paste care-mgmt programs for #ACA pop. are unsuccessful because they don't factor in their unique needs.
Share

As we begin another open enrollment period, and enter the fourth year of the public health insurance exchanges, many health plans are struggling to manage their ACA line of business. Most have experienced significant losses and several high-profile exits underscore the difficulties associated with the public exchange population.

However, still-climbing enrollment (12.7 million enrollees last year, 5 million of whom were new) motivates most health plans to remain in the market. Here, Oliver Wyman Principal Marcia Macphearson breaks down the complexity of the ACA population and explains why insurers need to focus on addressing unique ACA member needs.

It is now well understood that the ACA population has been sicker than expected and initial pricing for exchange-based products was well below what is needed to cover the costs. (Initial pricing on the exchanges was 15 percent lower than CMS projections and up to 20 percent lower than Individual market premiums before the ACA.) To manage this gap, many insurers adopted a strategy to pass on the additional costs in the form of premium increases, and we have seen year-over-year price increases as high as 40 percent in some markets.

However, consumers’ willingness (and ability) to pay, combined with some state insurance departments’ threshold for rate hikes creates a finite life for that strategy. It is now abundantly clear that if plans are going to survive on the public exchanges, they require new, multi-faceted approaches. In order to get to long-term success managing an ACA population, insurers have to start working the bottom line.

Managing costs within the ACA population will be critical to long-term success, and successful medical-cost management depends upon effective care models. Designing the right care models requires a deep understanding of the utilization dynamics within unique member cohorts and then creating custom interventions that can address their needs.

Step 1: Get to know your members

The first step in adopting a medical cost-management strategy is getting to know your members. A typical ACA population includes a cohort of members whose health and utilization patterns will be similar to Commercial Group Business. However, within the same product set, about 20 to 30 percent of members will pattern more like Medicare members.

The ACA population also bears similarities to Medicaid, particularly in regards to low health literacy, higher proportion of behavioral health conditions, and high membership churn. Thirty to 40 percent of ACA members who enroll at the beginning of the year will have left the plan before the end of the year. Members aged 20 to 34 are among those most likely to dis-enroll, and members in Bronze plans are twice as likely to dis-enroll compared to Platinum members.

Some exchange members were previously uninsured, and their understanding of the complexities of health insurance and how to navigate the healthcare delivery environment are nascent. In this way, they bear similarities to the Medicaid population. We also have seen high ER utilization from members who are not used to having access to routine care.

Meanwhile, others within the ACA population are more savvy, having previously carried employer group coverage or navigated the self-insurance process in the pre-ACA Individual market. 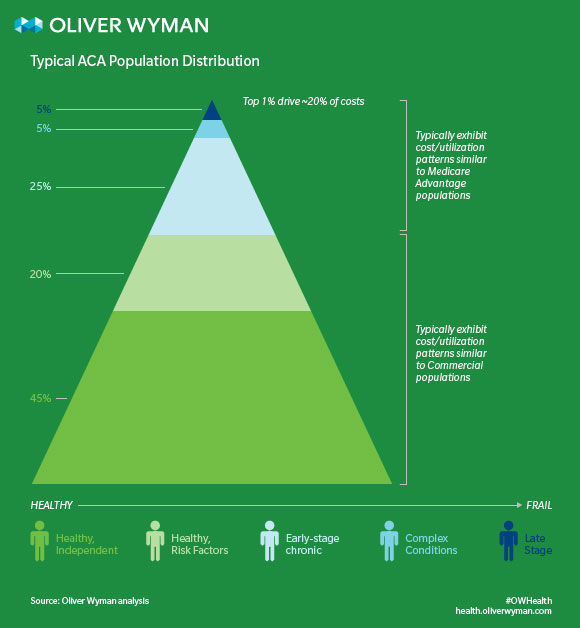 The bottom line is that within any ACA population, insurers will find a divergent mix of member acuity, experience, and behavior patterns. That is why copy-and-pasted care-management approaches from other lines of business have proven to be unsuccessful. These traditional initiatives do not factor in the unique social and medical needs of the ACA population.

Instead, managing this diverse population requires a customized strategy informed by a deep understanding of the various member cohorts – how they behave and what their needs are. For example, multi-disciplinary care programs that include social workers and benefit advisors partnering with a clinical care manager can help address the unique needs of an ACA member.

Medicaid plans that have stepped into exchanges and operated successfully (or, at least more successfully than most carriers) provide lessons in how to apply unique care management approaches to the ACA population. (Read related post: “Special Series: How Medicaid Players Have Mastered ACA Challenges”)

While ACA market stabilization may never occur without broader structural changes, plans can position themselves for success by better managing their medical costs through targeted care-management programs. This is a critical asset within a broader toolkit including pricing discipline, product placement, risk management, and network strategies. (Read related post: “The Future of ACA Exchanges; Making History or Repeating It?”)

Health plans that haven’t tailored their approaches to the unique needs of the ACA population and apply typical Group Commercial or Medicare care management will continue to struggle to control medical costs. Top line revenue through pricing adjustments will only solve part of the problem. Informed and targeted medical management approaches are a critical success factor for plans that have chosen to continue to stay in this market into 2017.