New Analysis: Enrollment and Profitability Trends in the Individual and Small-Group Markets

Health plans recently completed their second year of operations since major provisions of the Affordable Care Act (ACA) went into effect, and they are finding that both the individual and small-group markets present financial challenges. Peter Kaczmarek and Tammy Tomczyk of Oliver Wyman’s Actuarial Health Practice analyzed the latest financial information to identify trends in enrollment and profitability in both these markets.

Small-group enrollment has been decreasing steadily for a decade; but in 2014, when the ACA began to allow individuals to purchase health insurance regardless of health status and low-income individuals purchasing coverage through marketplace exchanges began receiving subsidies, the pace accelerated. Over the past two years, small-group enrollment has fallen 9.1 percent per year. (See “Individual and Small-Group Markets.”)

While many factors have contributed to declining small-group membership, climbing rates have undoubtedly played a significant role. The elimination of rating for health status in ACA-compliant policies has led to significantly higher rates for some groups with younger and healthier members. ACA-mandated enhancements to benefits, plus new taxes and fees have increased rates even further.

Thirty-five states currently allow small employers to avoid these increases in the short term by maintaining coverage under policies subject to pre-ACA rating requirements. But under current regulation, all fully insured small-group coverage will have to be ACA compliant by January 1, 2018.

However, small employers do not face a financial penalty for not offering coverage; and guaranteed-issue requirements, coupled with premium and cost-sharing subsidies in the individual market, have lessened employers’ concerns that employees will be unable to obtain coverage on their own. Consequently, we expect the small market may continue to contract for several more years. 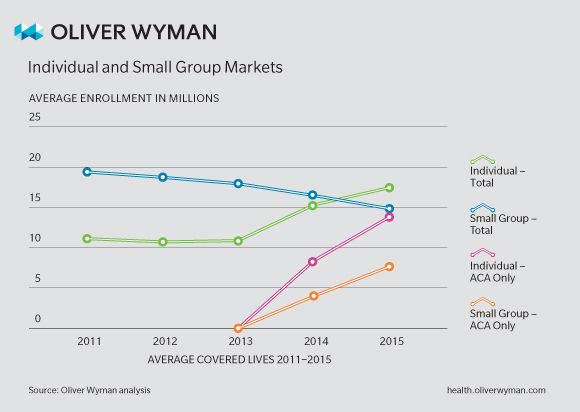 Small-group enrollment trends 2013-2015 by state:
Declines, on average, are greatest in states with no transitional policies

The map below provides a breakdown of the average annual enrollment change in the small-group market (including both ACA and non-ACA) from 2013 to 2015 by state. All states except Montana and the District of Columbia (DC) experienced decreased enrollment over this period. We believe the increase in DC is in large part due to the requirement that members of Congress and designated congressional staff must enroll in the DC Small Business Health Options Program (SHOP) in order to be eligible to receive a government contribution to their coverage. 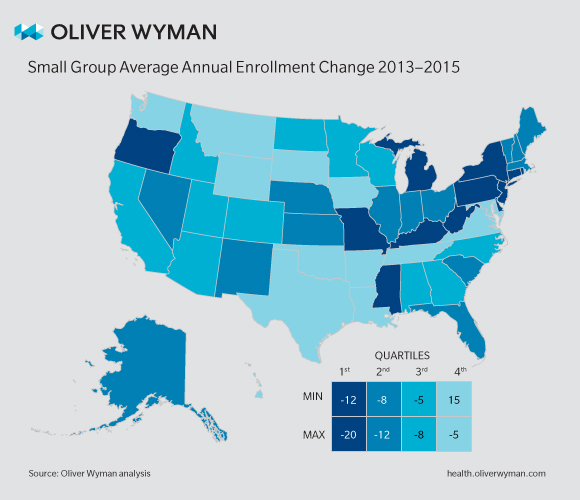 The average small group membership decreases over this period ranged from 20 percent per year in Delaware to 1 per year in Iowa with a market wide average of 8.4 per year. On average, the decrease was higher for states that did not allow transitional policies than it was for those that did.

Healthcare underwriting has become significantly less profitable over the past five years. (See “Underwriting Gain/Loss,” based on data from the Supplemental Health Care Exhibits, which are part of the annual statutory financial reporting for all insurance carriers nationwide, excluding carriers regulated by California’s Department of Managed Health Care.) Losses in the individual market have increased significantly since 2014. The small-group market remains profitable, though profit per member per month has declined by roughly half since 2014. Deteriorating results in both the individual and small-group markets have contributed to reduced profitability of the overall health market, which has experienced losses starting in 2015.

Outlook for the individual and small-group markets

The transitional policies permitted by 35 states have allowed many small employers to maintain coverage based on pre-ACA rating rules. By the end of 2017 these plans will no longer be permitted, and many small employers will need to make decisions about the coverage they offer to their employees. Some employers will likely opt to drop coverage or self-fund, and many of their employees may find their way to the individual market. We expect that those issuers that decide to self-fund are likely to have employees who are younger and in better-than-average health. This has the potential to accelerate the recent decline in the small-group market, as the average morbidity of those that remain is likely to be higher.

Subscribe
A Story in 4 Charts: Risk Adjustment in the...
Market Meaning: Commission Cuts on ACA Plans...
Point of View: The ACA, Staggering Losses, and...