Report: Lessons on Gender Diversity in Financial Services for Healthcare

In panel discussions and in private conversations, women attending last week's BIO International Convention, reports STAT NEWS, identified a key problem that could take years to address: There simply aren’t enough women in life science venture capital. Nina Kjellson, a general partner at Canaan Partners and a member of the Oliver Wyman Health Innovation Center Leaders Alliance, told reporter Meghana Keshavan: “We’ve shined a light on the problem, and now we must focus on active solutions.” She further noted that some progress is being made, pointing out that while only a handful of women used to attend a “women in venture” dinner at the annual JP Morgan Healthcare Conference, "Now we’ve got over 130.” These issues of gender diversity in the world of healthcare finance are reflected in the second edition of Oliver Wyman's Women in Financial Services report released this week. We share below the Executive Summary of the report's key findings and recommendations:

Our analysis of 381 financial services institutions in 32 countries shows two concerning patterns: First, female representation on Executive Committees is growing much slower than on Boards. Second, the growth observed comes only from some countries. In many countries, there is little, no, or even negative growth in female representation on Executive Committees.

Without doubt, there has been significant effort and investment in attracting more women to financial services and in developing more of them into leaders. Many organizations have initiated recruiting, networking, sponsorship, and training programs targeted at women. Many of the visible processes have been improved for equal opportunity. So why has the industry not been more successful in progressing towards gender balance at the top?

It is at this point in their career that women vote with their feet. Internal labour market data from our sister company Mercer shows that the exit rates of women in financial services in the mid-part of their careers are not only higher than those of their male colleagues, but also significantly higher than in other industries. Female managers, senior managers, and executives in financial services are 20 percent to 30 percent more likely to leave their employer than their peers in other industries.

Our statistical data, survey responses and interviews suggest that many women face a mid-career conflict. At this point, the costs of a career, especially the sacrifices in their personal lives, seem too great in relation to the uncertain benefits of pressing on. Women face a less attractive career trade-off than men – a difference to which the following factors contribute: 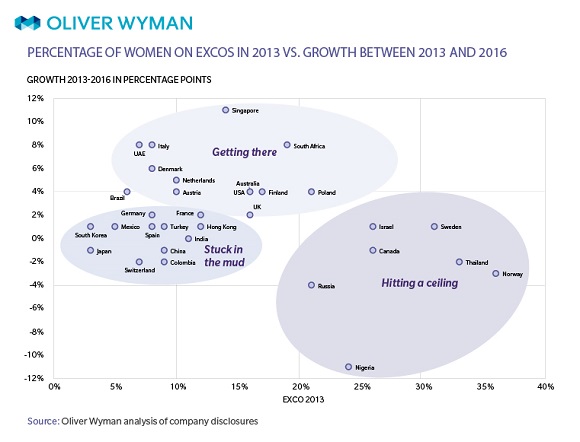