Point of View: The ACA, Staggering Losses, and the 2.126-Legged Stool 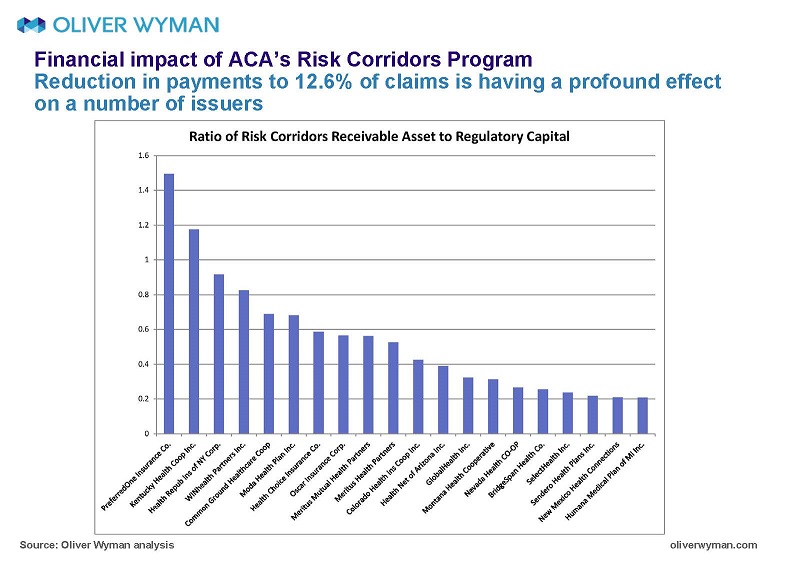 Just three months ago, federal officials were reassuring issuers  that they “anticipate that risk corridors collections will be sufficient to pay for all risk corridors payments.” Fast forward to the recent announcement by the Centers for Medicare & Medicaid Services that the federal government will actually only be covering 12.6% of the $2.87 billion that issuers had claimed under the program. The move by Congress to take away funding for the risk corridors program coupled with receipts under the risk corridors program not being sufficient to fund expenditures has created significant consequences for some issuers, and could have significant consequences for the market as a whole. Kurt Giesa, head of Oliver Wyman Actuarial Consulting’s Healthcare Practice, explains:

First, by way of background, the ACA requires issuers to provide coverage in the small group and non-group markets on a guaranteed issue basis using modified community rating. The drafters of the legislation understood that companies issuing health insurance policies in this environment would be taking on considerable risk. In order to encourage issuers to participate in the market and to keep premiums low, the ACA includes three “risk mitigation” programs: the permanent risk adjustment program, the risk corridors program, and the transitional reinsurance program. The latter two programs will only be operational through 2016. The risk mitigation programs were successful in encouraging issuers to participate in the non-group market and in encouraging issuers to charge premiums that were lower than many had expected.

CMS said of the risk corridors program that it “protects against inaccurate rate-setting by sharing risk (gains and losses) on allowable costs between HHS and qualified health plans to help ensure stable health insurance premiums.” The risk corridors program establishes corridors around an issuer’s expected financial results so that any issuer would be responsible for only 50% of the gains or losses between 3% and 8% of its expected results, and only 20% of gains or losses greater than 8%.

Funding for the risk corridors program was uncertain from the start, but an amendment to the Consolidated and Further Continuing Appropriations Act of 2015, brought some clarity and effectively made the program budget neutral so that funding for the program can only come from receipts under the program.

Risk corridors program results for 2014. For 2014, issuers claimed $2.87 billion under the program, and there were payments into the program of only $362 million. Because CMS only collected $326 million, and because funding of the program can only come from receipts, CMS is only able to pay out 12.6% of the amounts claimed (12.6% = $362 million/$2.87 billion). We note that if CMS had not increased the coinsurance percentage under the transitional reinsurance program from 80% to 100%, adding roughly $1.58 billion to issuers' bottom lines, claims under the risk corridors program would have been higher.

In total, we estimate the non-group ACA premium was roughly $35 billion, so claims under the risk corridors program in 2014 are equal to roughly 8% of premium (Oliver Wyman calculations based on Table 5 from the CMS publication here.) These claims are only a portion of the issuers’ losses, with claims equal to 50% of losses experienced in the 3% to 8% corridor and 80% above that level. Note that premium from Massachusetts is not included in Table 5, and the premium in Table 5 includes premium from qualified small group and non-qualified health plans and so may be overstated relative to the risk corridors program, which only applies to qualified health plans.

Impact on issuers’ financial condition. The impact of the reduction in risk corridors payments to 12.6% of claims is having a profound effect on a number of issuers as they write down the receivable they were holding under this program. The co-ops in Colorado and Oregon are the most recent issuers to announce they will be leaving the market in 2016, at least in part due to the government’s inability to fund the risk corridors program.

In the chart above, we show the ratio of the asset the issuer was holding for risk corridors to the issuer’s regulatory capital at the end of 2014. (Oliver Wyman calculations using data as reported from SNL.com. Includes all issuers where ratio exceeded 20%.) Included in the chart are a number of the co-ops that have ceased operation or that will be withdrawing from the market in 2016 including the co-ops in Kentucky, New York, and Colorado.

Going forward. The losses in the non-group ACA market in 2014 were caused largely by inadequate pricing. Premiums in 2015 increased only modestly, particularly in light of the reduction in the funding of the transitional reinsurance program and medical trend. As a result, we expect the claims on the risk corridors program in 2015 to be at least equal to those made in 2014, and we expect a number of issuers will continue to see deterioration in their financial positions.

The end of a number of co-ops and other issuers that mispriced this business in 2014 and 2015 will remove some destructive competition from the market and will result in higher premiums overall and lower claims on the risk corridors program. Still, because issuers set their premiums for 2016 before they had full knowledge of the financial impact of the risk mitigation programs, we believe claims under the risk corridors program for the 2016 plan year will again be larger than receipts and that many smaller issuers with considerable ACA business will continue to find themselves with a deteriorating cash position.