Proposed 2016 Rate Increases: What They Say About the Maturing Individual Market 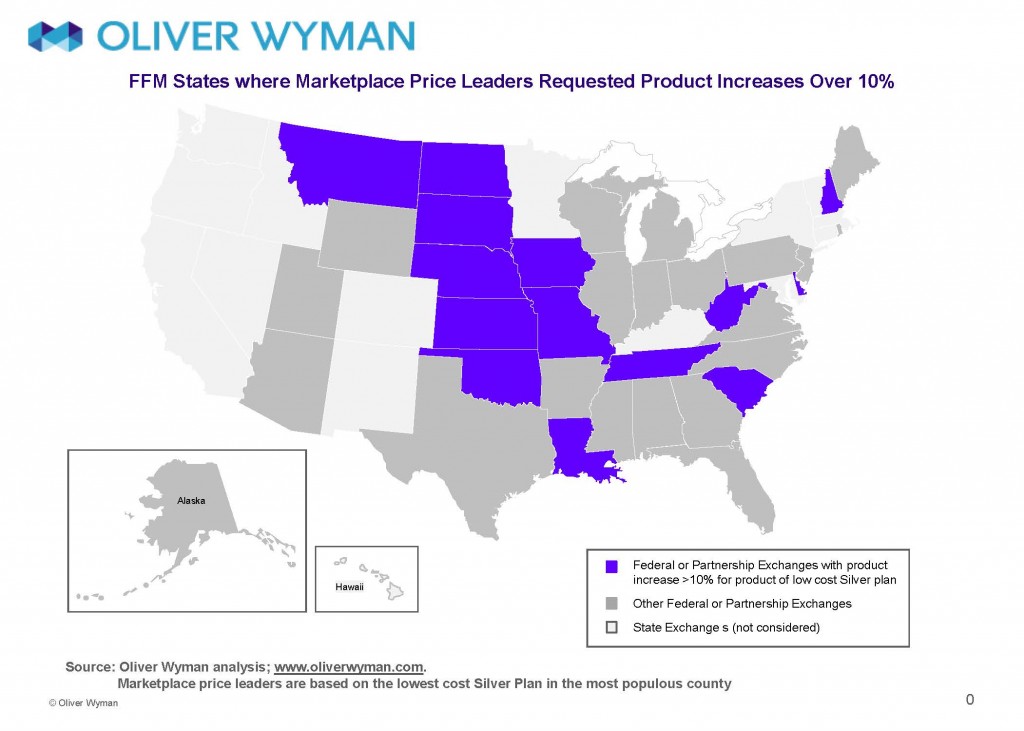 Last week the Department of Health & Human Services publicly posted health insurance companies’ proposed rate increases of 10 percent or more for the 2016 coverage year as part of its “commitment to transparency and robust rate review.” Jac Joubert with Oliver Wyman’s actuarial practice reviewed the list and has these observations to share:

What stands out is the length of the list. More than 480 products across over 100 issuers in the individual market are requesting increases of over 10%, suggesting that higher increases were at least somewhat pervasive. Additionally, the list includes Blue Cross or Blue Shield entities in 22 of the 30 healthcare.gov states where these entities offered individual exchange products. The widespread need for rate increases is not totally unexpected – S&P analysisshowed that 30% of issuers studied booked an expected receipt from the risk corridor program, indicating significantly worse than expected financial performance.

Then there were the headline-grabbing high increases. The 65% requested by Blue Cross of New Mexico was only a single case among the 30% of the product rate increases included in the listing that were for issuers requesting increases over 30%. Also, large increases were not limited to a specific business model: in addition to the Blues entities, the list included integrated health plan Geisinger Health with requested rate increases of over 40% for its HMO products, and the mutual Co-Ops such as those in Tennessee, New Hampshire, and Utah with requested increases as high as 59%. This suggests that rate increases are at least partially due to initial mispricing and an evolving environment, rather than a case of overcharging of consumers by a specific subset of issuers.

All increases are not created equal. Clearly the impact of a large increase on a high-priced, off-exchange-only issuer with limited enrollment in 2015 is different from the same increase on the market leading silver plan on the exchange. The list as published includes both types. We performed a simplified analysis, comparing the products with large increases against the 2015 listing of exchange premiums for states with a federally facilitated marketplace (FFM). In each state, we looked only at silver plans in the most populous county in the state. We found that in 14 of the 33 states, the lowest cost silver plan was among those included with increases considered potentially unreasonable (i.e. >10%).

But what does that mean for the consumer going into 2016? We know from prior exchange data and research that the majority of individuals covered on the exchanges qualify for subsidies, that subsidized individuals tend to prefer these lower cost plans, and that the impact of rate increases tend to be leveraged for those individuals receiving subsidies, sometimes significantly so. This suggests that a majority of consumers in a material subset of markets may face substantially increased net premiums after subsidies, come January 2016.

The conclusion is clear. Those interested in limiting the impact on consumers, or those offering competitive alternatives in the market cannot rely on price exclusively to drive individuals to their products. Effective market segmentation and outreach is critical to help these individuals make the right decision. And consumer impact goes beyond out-of-pocket premium costs after subsidies. Being able to maintain care during a transition between plans in a market increasingly characterized by narrow or tiered networks is a challenge in and of itself.

What should we expect for 2017 and beyond? What does that mean for participating issuers? The 2016 rate increases represent a departure from recent history of depressed trends. We don’t expect that this represents a new longer term shift towards high double-digit increases. Nevertheless there are a couple of reasons to believe that the 2017 rate changes may be above medical trend levels again, creating additional disruption in the market. Consider:

With time, as market knowledge increases, the expectation is for rate increases to become less variable and to be driven more by competitive dynamics than pricing uncertainties. I see this as holding important implications for health plans as they look forward to the 2017-2020 period:

As of now, the 2016 rate increases are just a part of the larger story around the transformation of the individual market. Market leaders have been building out these capabilities, but the lack of market maturity to-date has meant that these plans have not yet been able to fully apply capitalize on these investments. Competitors should expect that the plans will increasingly leverage their understanding of the price sensitivities and purchasing preferences of cohorts in the market to optimize portfolio design and pricing, and attract target individuals to solutions they value highly.

The ACA has been the impetus for much change since 2013. Only at the end of 2016, do we see the final phase-out of the transitional reinsurance and risk corridor programs, the initial crutches to stand up the new market. Only now are we seeing the market start to mature, as the risk level in the market is becoming known to issuers. This presents health plans with both the opportunity and the imperative to fine-tune their product and pricing capabilities beyond the initial market testing and compliance phase, and to focus on those areas where they can outperform peers over the medium term.

Subscribe
The Post-Pandemic Payer Mix: What Happened and...
Outlook on Climate Change as a Healthcare Crisis
Humana’s Bold SDOH Strategy