Slide Show: Accountable Care Within Reach of 15-17% of Americans 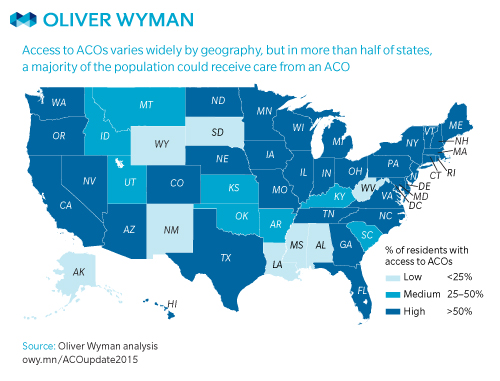 Despite well-publicized departures from Medicare’s Pioneer ACO Program, the number of accountable care organizations (ACOs) continued to rise in the past year, though at a slower pace than in 2013. Almost 70 percent of the U.S. population now lives in localities served by accountable care organizations, and 44 percent live in areas served by two or more.

The figures come from a new Oliver Wyman report “ACO Update: A Slower Pace of Growth,” based on the Department of Health and Human Services’ announcement of the latest class of ACOs approved to participate in Medicare’s ACO programs. The latest round of approvals in January brings the total of Medicare ACOs to 426, up from 368 in January 2014 and 134 in 2013. Oliver Wyman has identified an additional 159 ACOs, bringing the estimated total to 585, up 12 percent from previous year.

As the above slide shows, access to ACOs differs considerably by state—and within states—but in the most recent analysis, a majority of the population in more than half of the U.S. could receive their care from an ACO.

“The slowdown we’re seeing in the growth of ACOs was almost inevitable, given the pace of change of the past two years,” says report author Niyum Gandhi, one of the firm’s experts on ACOs. “The next big spurt will be more in effectiveness and sophistication than it will be in growth in numbers of ACOs.” Gandhi also cites that the changes to the rules that CMS proposed this past winter, especially the Next Generation ACO model, could give ACOs the boost they need to compete more aggressively.