In many ways, Medicare Part D, the program that provides seniors with prescription drug coverage, has been a great success. For the nearly half of Medicare beneficiaries who have enrolled, it has provided medications at relatively low cost; the 2014 average monthly premium (weighted to reflect enrollment) is just $41.23. And costs to the taxpayer have been surprisingly low. In fact, net federal spending on Part D in 2013 was a stunning 50 percent less in Fiscal Year 2013 than the original Congressional Budget Office projections. Yet, while the program has essentially been a win for consumers, it has been a gauntlet for plans. Oliver Wyman Partner Jim Fields explains in “The Part D Dilemma” why it can be so hard. He shares below why scale matters in the consolidating marketplace:

For insurers, and especially for smaller health plans, Part D is a difficult business, dominated by a handful of players and marked by extreme pressures on pricing, in which it is hard to achieve even the limited margins permitted by law. Achieving economies of scale is the critical success factor as regulatory and compliance issues place a disproportionate burden on smaller PDP plans (see chart below). Small plans generate so little revenue that they are hard pressed to cover vendor costs (and certainly aren’t getting the most favored drug discounts and PBM rates). It is crucial to find a way to drive greater scale. There are a number of alternatives but they disproportionately require partnership: PDP plans can merge or collaborate to spread their PDP costs over a larger base. They can buy services from another PDP plan (or sell their own services to another PDP). They can form consortiums. The appropriate choice will depend very much on the circumstances the health plan finds itself in. 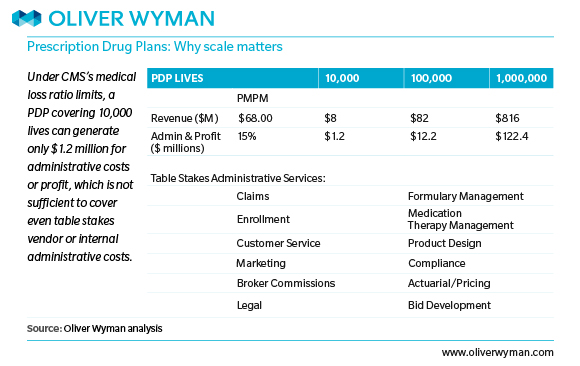 But if this challenge is not met, the PDP business will become increasingly risky and untenable for small and mid-sized players over the next few years. The high fixed cost, low margin aspect of the Part D business clearly lends itself to economies of scale as a key success strategy. For new, small or geographically constrained plans the capabilities and timeframes needed to achieve the necessary scale on their own can be an insurmountable hurdle. Finding a partner creates a viable path to jump the scale curve. While outsourcing arrangements are a possibility and have been shown to work in some settings, they struggle from the fact that the contract holder still must maintain many of the regulatory compliance duties and several of the go-to-market activities.

As of June 2014 three companies command more than 55 percent collectively—UnitedHealth Group (22%), SilverScript (18%), and Humana (16%). Each of these plans offers a PDP product in all of the 34 PDP regions, making each a truly national player. These plans have the scale to achieve administrative efficiencies, manage the costly compliance demands, and strike broader co-branding arrangements that bolster their member capture. For example, UnitedHealth Group partnered with AARP on its PDP, CVS Caremark owns SilverScript, and Humana and Walmart have a joint co-branded product.

Ultimately we expect a growth of white label offerings where a handful of national contract holders develop Part D offerings that could be branded to serve the needs of plans spread across different Part D regions (e.g. coalitions of Blue Cross and Blue Shield Plans, coalitions of local or provider owned health plans, etc.). Finding “out-of-the-box” brand partners is a strategy that has been very successful in the Part D market in recent years as well. Both United and Humana have proven that partner entities can vastly improve market presence for a PDP plan. Through its partnership with AARP, United has stronger brand positioning with its target market. For Humana, its partnership with Walmart provides access to the retailer’s drug sourcing, distribution methods, and preferred networks that enable consistently lower prices and bring a household brand name. These partnerships are important though difficult for small plans to replicate. As a coalition, a group of PDP plans would have the scale and national coverage to entice a prominent retailer.